Time for a new direction for Darron Gibson

THE night out had been fun. Everyone was drinking and laughing and then suddenly it was time to go. Back home, things became hazy, he'd later say. He'd tell police he had a row with Danielle, his wife.

And the next day, he got into his car, a Nissan Skyline GT-R Nismo, drove away from his plush house in Altrincham, collided with three cyclists and then a petrol pump in Bowdon, before he got out of his car and attempted to fill up his tank.

Where he was going to, we don't know. Nor can we tell the direction Darron Gibson's career and life are heading in right now, either. At 27, he is on the brink of turning into Irish football's forgotten man.

Certainly he is its luckiest one. Last week, he walked away from a Cheshire court with a €7,900 fine, a 20-month driving ban and 200 hours community service. Philip Quinn, a cyclist who was hit by Gibson's car, is blessed to be even walking at all. The incident left him with bruised limbs and ribs.

Gibson's pain is of a different kind, however, with his lawyer outlining how the Irish international is embarrassed for bringing shame onto his family. His one saving grace is that he was contrite in court. He knows he messed up. And so do others. Mike Bristow, a spokesperson for the road safety group, Brake, told the Irish Sun: "This behaviour from someone who should be a role model is unacceptable."

He must know it. At an age when he should be in the prime of his career, he should be making headlines on the back pages rather than the front, directing traffic from the centre of Ireland's midfield, not pleading guilty to driving with excess alcohol.

So is this the beginning of the end or the end of the beginning? "Well, the number of games he has played in the last couple of years is worrying," said Martin O'Neill, the Irish manager.

"That's something he has to address on his own. Injuries (Gibson has suffered cruciate and foot problems) definitely saps your enthusiasm. They can dampen your spirits."

Nonetheless, the time for excuses (made either by, or on Gibson's behalf) are over. He's a grown man now and even though it is nearly a decade since he made his professional debut for Manchester United, it is somewhat alarming that in the nine years and 11 months since, he has yet to make 100 starts in club football.

"You'd hope what happened last week will be the lightbulb moment in Darron's career," said Steven Reid, the former Irish international. "You'd hope he'd see that it is a short career and that he has only a certain amount of time left. You'd hope he learns from this." 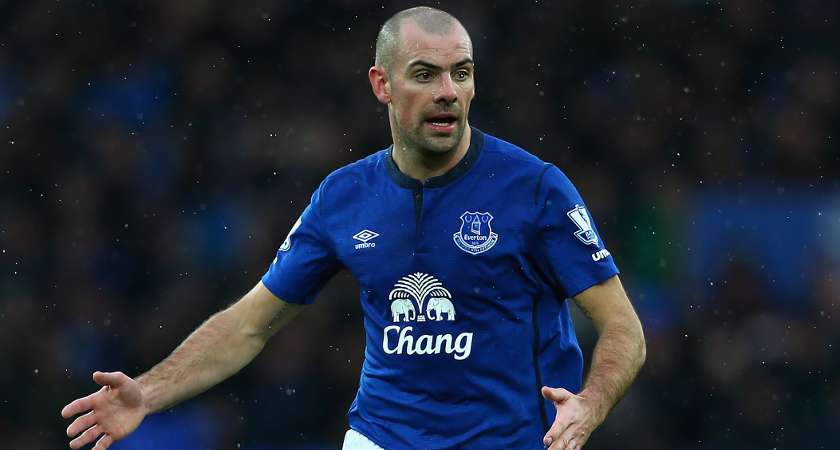 Gibson hasn't hit the heights expected of him at Everton [Picture: Getty]
Right across the board, patience is running thin with Gibson. Everton have used him just 57 times in three-and-a-half years since they signed him from Manchester United, and not once this season.

Then there is O'Neill, whose trust in him is, you sense, at breaking point. A year ago, the Irish manager predicted: "In the course of time you can see him getting fitter, better and a bit more confident within himself, knowing that his (knee) injury has cleared up. I think you'll see a vast improvement in his game and hopefully he'll be around with us for the qualifying tournament."

But he hasn't improved and hasn't always been around. He did well against Gibraltar last year, came off the bench against Germany, started - but played poorly - against Scotland in Celtic Park and has not featured since. "Well, he hasn't been around us that much," said O'Neill last week.

Some haven't a lot of sympathy for his situation. As far back as January, Kevin Kilbane advised him to leave Everton to get his career back on track. Yet he's still at Goodison Park and you have to wonder why.

You also have to wonder what his defining moment with Ireland will be. Will it relate to anything he does on the pitch? Or will he be remembered as the man who took a gap year from international football after being ignored by Giovanni Trapattoni in Euro 2012?

When that self-imposed exile came to an end, he spoke to the Press more openly and candidly than ever before, a day when he was selling not just a product but also his story. Having stored up his emotions for a year, after feeling wronged by Trapattoni at the Euros, he felt he had to let it all out. "Do you know what? It's good to let all this anger and frustration go," he said.

Yet by doing so, others - and not just Trapattoni - were hit in the crossfire, in particular Paul Green, who had to listen to Gibson say the words, ‘no disrespect to Paul Green but …’ – which, no matter how you look at it, was an obvious slight on the midfielder who was picked ahead of him at Euro 2012.

"For my sake, I was lucky Italy was the last game because I probably would have done something I'd have really regretted,” said Gibson about the torment he went through at Euro 2012. “My head completely went. I could have done anything."

That lack of composure manifested itself on the morning of August 16, when he lost control of his car and struck the men who had stopped at the roadside to fix a broken bicycle chain. The most serious damage caused was to Gibson's reputation. It can be fixed but only one man is capable of doing the repairs.

FAI pays tribute to Damien Duff upon his playing retirement