‘What the hell is this sport?’ – British people react with confusion and anger to Mayo v Dublin All-Ireland final

EVER since Sky Sports began broadcasting the GAA in 2014, households across Britain have been exposed to Ireland’s national sport like never before.

While Gaelic football is relatively easy to get to grips with – at least compared to hurling – our cousins across the Irish Sea continue to be baffled by all things GAA.

Following Mayo’s heartbreaking last-minute loss to Dublin in the All-Ireland final on Sunday, a number of British viewers took to social media to express their befuddlement at the “sorcery” of Irish sport.

Stephen Maher struggled to get his head around the rules, asking: “Are they only allowed to carry it for so long before they have to either bounce it or kick it?"

He added: “What is this sorcery?”

William Bromlee asked simply: "What the hell is this sport?"

While Matt Read was left confused as he tried to compare the game to other sports, writing: "So you have basketball...Aussie rules...rugby...football all in one sport. Make ya minds up.” 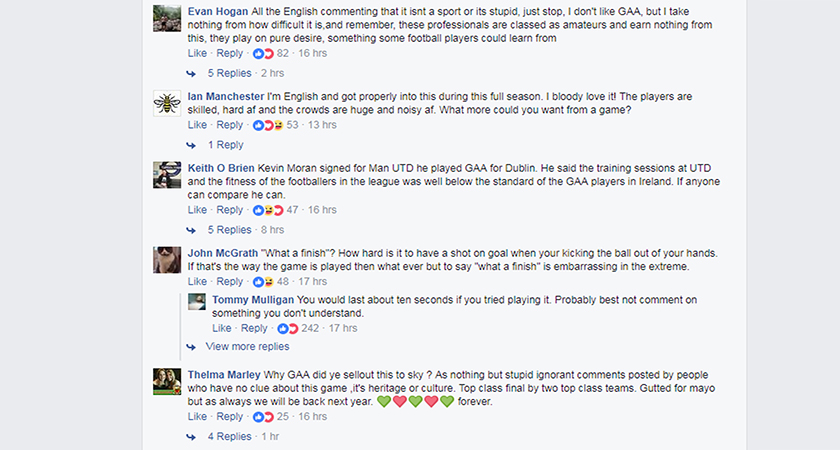 It's fair to say the big game caused a stir online (Image: Facebook)

But one Irish user responded in brilliant fashion, writing: “With the exception that Gaelic football is older than all those sports.”

Most were a bit too confused to be impressed, but there were many who expressed a genuine fondness for the sport, if not for its rules.

“I'm English and got properly into this during this full season. I bloody love it!" Ian Manchester said.

"The players are skilled, hard as f*** and the crowds are huge and noisy. What more could you want from a game?”

While Craig Elliott admitted: “I like the game, I think most people slate it cos they don't understand the scoring.

"I imagine you don't get so many goalless bore draws like in football.

“Looks like a right laugh, passionate fans too, that integrate in the stands. A small thing football fans could learn.”

By: Anthony McLaughlin  -  4 weeks ago

By: Anthony McLaughlin  -  4 weeks ago

By: Anthony McLaughlin  -  1 month ago