IN an age when lively markets are dying everywhere, I thought I had witnessed the greatest survivor when I tucked into a steaming plate of paella to the strains of ‘Dirty Old Town’ at St George’s in Belfast.

It was late on a Sunday morning two years ago, beneath the stylish Victorian cast iron and glass roof, where thousands of joy-seekers were hunting for baps and bangles, as live bands and artisan food stalls assailed them with their hypnotising sounds and smells.

But that magic was surpassed recently when my partner and photographer, Sue Mountjoy, and I rose just after dawn, put on our winter coats and strode along the chilly north bank of the River Elbe to reach Hamburg’s legendary fish market.

To be accurate, we arrived at the Fischauktionshalle (literally ‘fish auction hall’) at just after 6am and we were among the few present who had left our dancing shoes back at the hotel.

Thousands of energetic revellers were downing beer, scoffing cooked fish of all types and kicking their heels in the air to the talented rock cover bands that were alternating every half hour on the stages at either end.

Everyone was at it, from loose-limbed pensioners and starry-eyed lovers to families with young children and, of course, the foggy-looking all-nighters who had drifted across from a session of debauchery in the bars and sex clubs of the nearby St Pauli district, of which the infamous Reeperbahn (the most sinful mile in the world) is its best-known street. 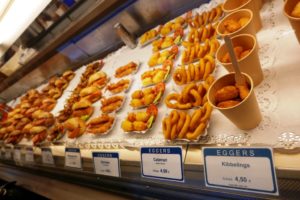 Outside the high-domed hall, the energy was equally electric with dozens of fast-talking market traders selling everything from the freshest of fish to baskets of fruit and vegetables, meat and sausages, porcelain, jewellery, clothes and even live chickens and eggs.

It’s been a nailed-on Hamburg tradition since the early 18th century and you can see why the locals throw off the duvets to join tourists for one of the city’s must-see weekly events.

For Sue and I, a deep fried mackerel fillet in a fresh bap with a gravy-like hot coffee were certainly a Sunday morning first, amid the joyful hordes who were downing cockles, smoked sausage and hot donuts by the bucketload.

After an early morning craft beer in the hall and a jiggle on the dance floor, we felt we might just stay all day, but the music and action begins to burn out around 9.30am, which still puts you in a good position to explore some of the city’s other great sights.

The market butts up against the St Pauli piers, the Landungsbrucken, which is  packed with restaurants and ferries, both private and the cheap public versions, as being a transport hub with S-Bahn, U-Bahn stations and even the Old Elbe tunnel under the river, which provides an unusual walk or cycle journey to the  opposite riverbank.

If, like us, you only have a weekend to get around then you don’t want to waste time or energy trying to do too much in a liveable port city of 1.8 million which caters for a vast range of interests, from rackety cocktail bars for hen parties on a rampage to museums, galleries and concert halls for sophisticated culturists.

The centre is easily walkable and our journey began in the most iconic of culture vulture magnets, the glacier-like Elbphilharmonie, (locals call it the much-simpler Elphie) a huge cube of glass and steel concert hall opened in 2016 atop a 1960s brick-built warehouse which stands alongside the preserved Elbe-side cranes that once landed coffee and grain from across the globe.

Thousands of visitors take the €866 million building’s 84-metre undulating escalator up to the plaza for the wraparound walkway view of the developing new district of Hafencity and Greater Hamburg below. 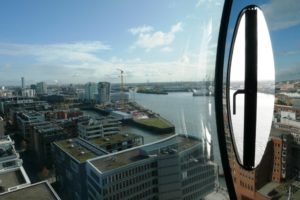 Room with a view at the Westin Hotel (Pic: Sue Mountjoy)

As such, it could not have been more convenient to be spending our break at the 244-room Westin Hamburg, which is part of the building itself and provides those same dreamy views with its floor-to-ceiling windows.

Seldom has a hotel room enthralled us, but Sue and I were captivated at the ‘Toytown’ vista that spread out below our huge window, alongside what was rightly described as a ‘Heavenly’ bed and bath which provided a soothing soak and sleep later.

But before that, we hit the streets and found the hotel proved just a stone’s throw from the city centre and the harbour, with its huge container and cruise ships (the largest ever built, Queen Mary 2, was actually in port as we passed). 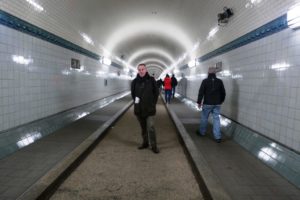 First up though was a tourist orientation trip, courtesy of one of the familiar red double-decker Line A sightseeing buses.

Despite the shaky English audio commentary, the friendly guide came to our aid and pointed out most of the key sights in 90 minutes.

Often it’s the best way to get your bearings in an unfamiliar place and it showed us the city’s parks, historic districts, glamorous shopping streets and some of the best places for a meal and a drink.

Back at the piers, we grabbed a huge Bratwurst hotdog before diving onto one of the tourist boats for a circular tour of what remains Germany’s biggest port, a remarkable sight of the liners, the Blohm and Voss docks packed with container ships and cranes, the city’s beach and its rebuilt Speicherstadt or warehouse district now a haven to classy shops, offices, apartments and tourist attractions.

Sadly, the boat’s phone app that gave us the English version of the German commentary froze after three minutes, leaving us guessing what everyone was gawping and giggling at.

For dinner, there is so much choice, but we were steered toward Vlet for its blend of flair and North German tradition, such as the hearty Labskaus with fish, meat, mash and beetroot combined and pannfisch, which is a very tasty plate of fried Arctic char.

After a long snore on that ‘Heavenly’-branded Westin hotel bed, next morning came the fish market extravaganza, followed by the short walk round St Pauli’s and the Reeperbahn in daylight, in which the previous night’s devastation was obvious. 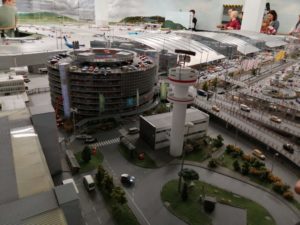 Despite the tackiness of a red-light zone that began life as a sailor’s haunt centuries ago, the district is packed with history – not least being The Beatles’ two years spent there playing over 300 gigs as they morphed into the world’s most famous beat band.

You can take a 25 euro guided tour of their haunts, as well as the plaza that commemorates them and the sites of the clubs they played and the barber, Franz, at Harry’s Salon on Davidstrasse who cut their mop tops.

Back on the waterfront, the Old Elbe Tunnel, with its creaky lifts and incredible walkway under the river, was well worth the time and effort, as was the small Portuguese District, where we found a Lisbon-style bistro full of familiar treats in an area packed with similar eateries.

It was fitting for a whistlestop city tour that our final stop was at Miniatur Wunderland, home to the world’s biggest model railway and numerous Hamburg landscapes, including a working model of the city’s airport and the Elbphilharmonie set majestically within its surrounding area.

Inside every (male) adult, there is a model railway-constructor well-and-truly trapped (ask Sir Rod Stewart) and this place enabled me to indulge my subliminal passion, as well as providing some lasting birdseye images of the city’s best sights.

Not only that, spread across several rooms and with 10 miles of tracks and over 250,000 human figurines, the centre takes its countless open-mouthed visitors across the world, to las Vegas, the Swiss Alps or to Rome, complete with the Coliseum and St Peter’s Basilica.

There was even an outdoor sell-out Abba concert in full song, complete with big screens and blinking smartphone cameras.

Rooms are €200 a night, excluding breakfast, which is €30 euros per person. Suites start at €500 per room per night. Reservations can be made at reservation.the [email protected] Full hotel details here.