The Falls Hotel and Spa in Co. Clare

AN IRISH hotel has managed to achieve a much-coveted carbon neutral status after taking on a five-year sustainability project.

When the Falls Hotel & Spa in county Clare reopens later this year, guests will leave no carbon footprint once they step foot on hotel grounds - thanks to a series of waste reduction and innovative energy initiatives on the property.

The 140 bedroomed hotel, which is located in the scenic Burren and Cliff of Moher UNESCO Global Geopark, was awarded the carbon neutral status by Green Hospitality Ireland for eliminating its carbon output over a five-year period.

One of the most significant measures taken by the hotel was the installation of a €1.3m hydroelectric turbine on the nearby River Inagh, which generates enough electricity to power the hotel.

Other projects included switching to renewable electricity and Bio LPG gas, using water from the hotel’s own well and planting 350 native Irish trees on the hotel grounds.

A green team was also set up to encourage staff to become fully involved in all of the hotel’s sustainability initiatives.

These include using chemical free cleaning products, compostable cups and straws and cutting back on food waste.

Being based in the Burren and Cliffs of Moher UNESCO Global Geopark and a member of the Burren Ecotourism Network, owners the McCarthy family were conscious of trying to reduce their environmental impact on the area around them. The move to renewable energy was also driven by demand from guests, locals and staff. 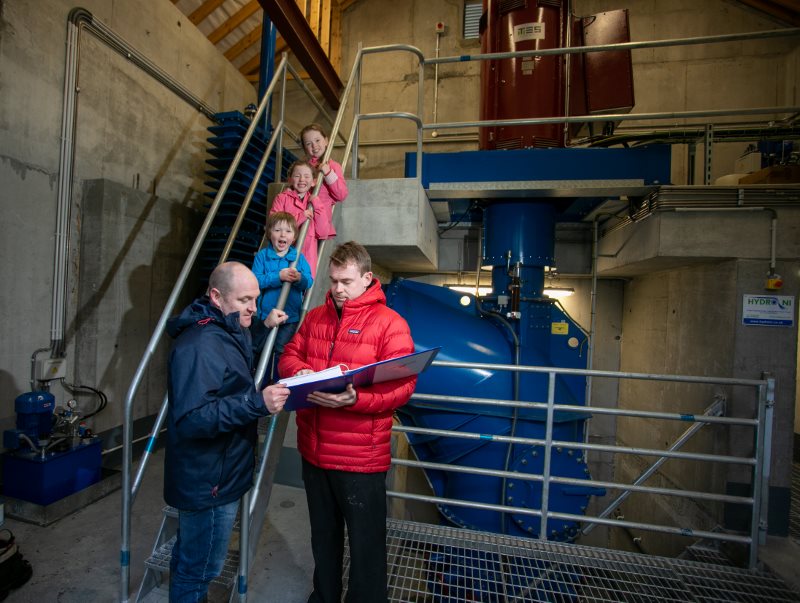 Michael McCarthy, General Manager, Falls Hotel, said “We are delighted to receive this recognition, especially given the huge investment we have made with our hydroelectric plant.

“We are extremely proud of this award. With 140 bedrooms, a leisure centre and a spa complex, we went from having a large carbon footprint to being carbon neutral in five short years; it’s a massive achievement.”

He added: “Being based in an area of such natural beauty as the Burren, we felt compelled to do our best to minimise our impact on the area around us.

Utilising the power of the river alongside us seemed the best place to start our sustainability journey.”

However, the idea of harnessing energy from the nearby river Inagh is not new to the area.

In the 1960’s the hotel’s previous owners Bridget and John F Woods recognised the potential of the cascades to generate electricity for the then 20-bedroom hotel.

A year after it was completed in 2019 the property had reduced its energy consumption by 830,000 kWh of electricity.

This counteracts the emission of an estimated 550 tonnes of carbon and is the equivalent of offsetting three return trips, by car, to the moon.

The 220kw turbine, which Is located next to the Inagh river, provides up to 70 per cent of the hotel’s annual energy needs.

In winter this can reach 100 per cent, when the river is in full flow.

During drier spells, the hotel tops its energy from renewable electricity sources.

Any excess electricity will be sold back to the national grid or there are plans to install a battery unit which can store electricity which can be used by the hotel later.

Sustainability not only guides the management of all operations at the hotel but is at the heart of the guest experience.

All guests are also encouraged to play their part, whether it’s reusing towels, using less water, turning off lights and heat or dividing their rubbish into separate bins in their rooms.

It’s all part of a concerted effort to educate visitors on the importance of sustainability.

The story of the hotel’s journey to sustainability will now be told on storyboards located around the hotel and next to the hydro-electric pump house beside the river.

More trees will be planted annually, and guests will be encouraged to offset their own carbon footprint by adopting a tree.

“It is our responsibility to take direct action to minimise our environmental footprint and we have additional plans to further reduce our absolute consumption and drive even greater levels of sustainability within the hotel,” Mr McCarthy added.