Festival highlights in Ireland this Autumn

A cultural honey-pot of theatre, dance, music and comedy, the Dublin Fringe specialises in unconventional events alongside the more traditional fare.

The old Market House and a specially erected late-night marquee are the centre events, with a blues trail that takes in six of Monaghan’s best pubs.

A Taste of West Cork

Taking place in and around Skibbereen, this festival brings together a mix of food markets and demonstrations, special dinners, brunches and banquets, food-tastings, talks, exhibitions, children’s events and live music.

Celebrate a first class food producing-region, as well as Waterford’s food culture, which for centuries has been influenced by the city’s role in importing and exporting food.

The Dingle Fife and Drum Band launch the festival on September 12 from O’Flaherty’s Bar. Acts include Barry Tierney, Cillian King, Tola and Laoise Kelly and the Paddy O’Callaghan trio. Tom Crean’s Session Trail sees some of Dingle’s pubs host some of Ireland’s top trad musicians. Tom Crean’s Expedition: Boots & Flutes on Cnoc a’ Cairn features a hike to (and session at) the summit of Cnoc a’ Chairn.

Free live gigs from 24 bands in 10 different music stages in venues throughout Dunfanaghy and extending to Creeslough. Acts include Shawn Jones, The Men That Knew Too Much, The Met Quartet and Odd Socks Revival.

A literary festival that will be the first major event for Dún Laoghaire’s new library and the recently built cultural centre.

An extravaganza of seafood, culinary treats and traditional music and dancing. Acts include The Stunning, the Galway Bay Jazz Band and The Bluenotes. This year features the Diamond & Pearls 60th Oyster Gala on Saturday, September 13.

A mix of the eclectic and the traditional Highlights include The Bear by Chekhov, the Cashell Duo, talks and demonstrations by Darina and Rachel Allen and music from Rynne, Barou and Lunny.

Catch some of the finest acts folk has to offer in the stunning grounds of Dunderry Park, including  Lisa O’Neill, The Lost Brothers and David Gray. 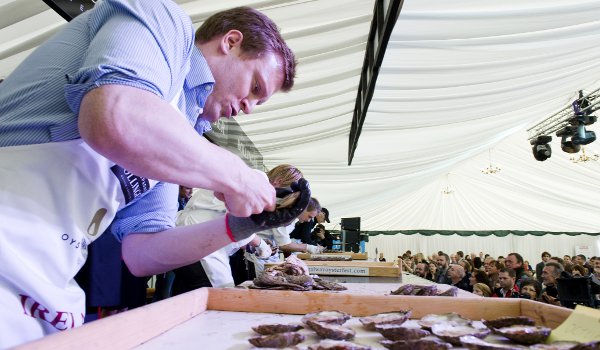 Still going strong in its 57th incarnation, featuring 500-plus performances in more than 20 venues in the city. A mix of old favourites, new productions, panel discussions and exhibitions.

In addition to classical recitals, there will be ‘Play Me’ pianos in public places, free al fresco jazz sessions, outreach concerts for students, and a masterclass for the more advanced.

Live entertainment, gourmet food, fine wine and of course Oysters and Guinness. The Oyster Opening Championships is the main event.

The Sligo Baroque Orchestra will be to the fore, but there will also be talks on what baroque music is, and how it influenced Irish traditional music.

One of the highlights is the short film-making competition. Teams of film-makers make and edit a short film in Birr in a matter of days, enlisting the help of locals in front of and behind the cameras. The films are submitted to an international panel of judges and screened to the public on the final day.

A mix of world-class theatre, music, dance, film, literature and talks. Acts include Elvis Costello, The Gloaming and the Old Crow Medicine Show.

This year features Michel Legrand whose compositions have been played by everyone from Frank Sinatra to Diana Ross — and which have won the musician three Oscars.

Enjoy the best in folk, roots and indie music. A highlight is Belinda O’Hooley and Heidi Tidow in concert with eclectic Irish folk band, NoCrows.

An exposition of all things culinary, in venues held throughout the city.

This year’s programme features Salomé, Don Bucefalo and Silent Night and short operas including Il Tabarro and La Cenerentola. There are pre-opera talks, lunchtime recitals, a gala concert and opera buskers out on Wexford’s old streets.

Banks of the Foyle Halloween Carnival

Reputedly the biggest Halloween festival in the world, spooky events celebrate the fact that Halloween is a Celtic invention, always keenly observed in the northerly parts of the country.