A depiction of the Anglo-Irish Treaty negotiations in progress at 10 Downing Street first published in the Illustrated London News on November 5, 1921 (PIC: National Archives, Ireland)

IRELAND’S Culture Minister was in London this week to launch a fascinating new exhibition marking the centenary of the the signing of the Anglo-Irish Treaty.

Minister Catherine Martin was in the capital yesterday to open the Treaty 1921 – Records from the Archives exhibition at the British Academy.

Poignantly the date of the opening marked exactly 100 years from the start of negotiations on the Anglo-Irish Treaty, which began at 10 Downing Street on October 11, 1921. 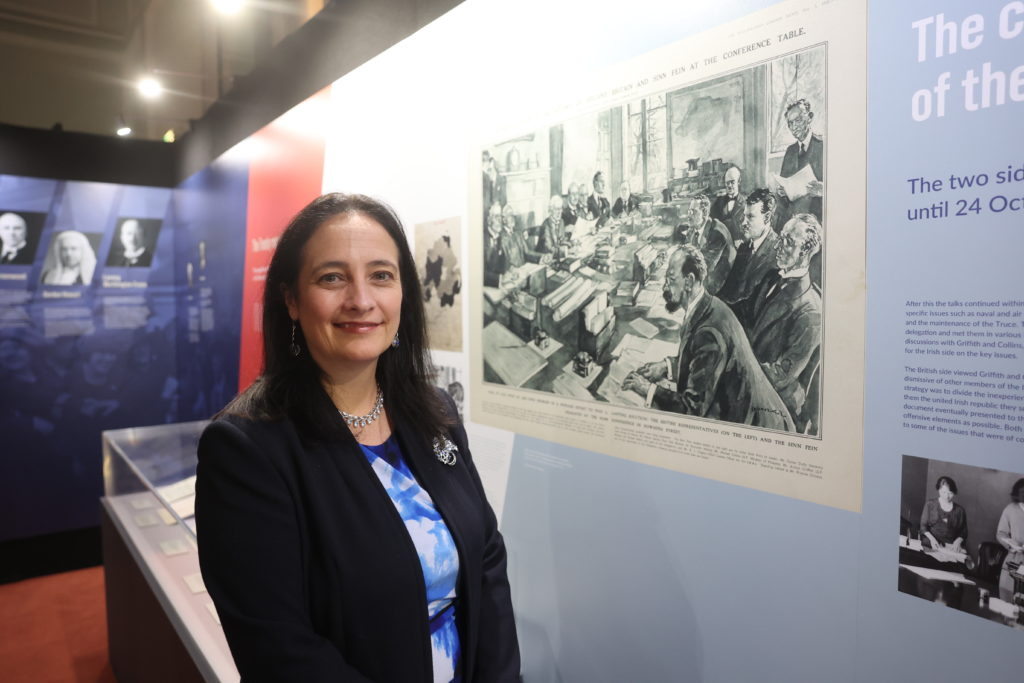 The Anglo-Irish Treaty is one of the most significant historical documents held by the National Archives of Ireland.

Using that Treaty as a centrepiece, the National Archives have presented a temporary exhibition in London which marks its role as the official repository of the records of the State, one hundred years since its formation.

Among the important documents, footage and images on offer in the exhibition are historical records, official documents and private papers, which have been made publicly available for the first time.

A highlight of the significant display is the first public presentation side by side of copies of the Irish and British Treaty documents. 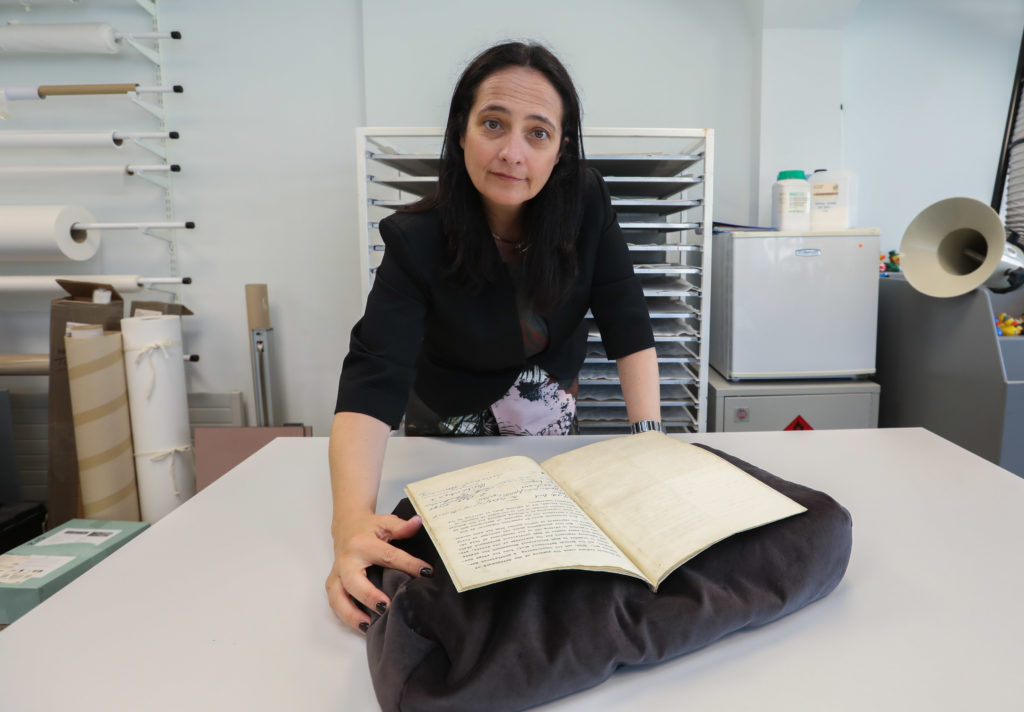 Minister Martin viewing the Anglo Irish Treaty 1921 at the National Archives in Dublin, ahead of its temporary move to London

Ms Martin said she was “delighted to visit London” to open the exhibition and “mark this historic moment in our shared history”.

“My responsibility, as Minister for Tourism, Culture, Arts, Gaeltacht, Sport and Media, is to ensure that this complex period in our history is remembered with an appropriate, meaningful, proportionate and sensitive programme, which recognises the legitimacy of all traditions, and values mutual respect and historical authenticity,” she explained.

“This exhibition is critical in furthering our understanding of the negotiations and the signing of the Treaty.

“I would like to thank the National Archives for developing this important display by placing the authenticity of the archival record at its centre and also the British Academy for generously hosting the exhibition.”

Using contemporary reportage, images and footage, The Treaty, 1921: Records from the Archives locates the Treaty negotiations in the political context of the Irish revolution and a world turned upside down by the First World War and its aftermath. 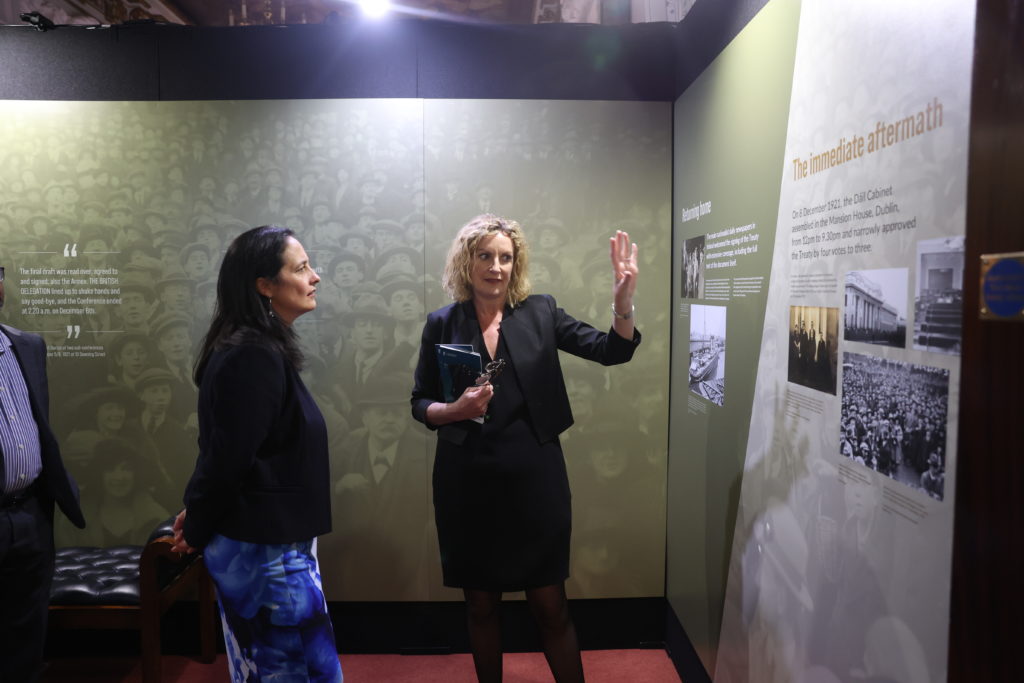 Minister for Tourism, Culture, Arts, Gaeltacht, Sport and Media, Catherine Martin TD, and Orlaith McBride, Director of the National Archives, pictured at the ‘Treaty 1921 – Records from the Archives’ exhibition at the British Academy

Beginning with the exploratory talks between Éamon de Valera, President of Dáil Éireann, and British Prime Minister David Lloyd George during the summer of 1921, it details the work of the Irish plenipotentiaries and their secretariat, by presenting the documentary record that they left behind.

The exhibition also chronicles day-to-day life in London for the men and women who made up the Irish delegation, from parties attended, dinners hosted and appearances at theatre and gala performances, to the tense final days and hours leading to the signing of the Treaty just after 2am on December 6, 1921.

Finally, it documents the delegation’s return to Dublin, and the Dáil Éireann Cabinet meeting that pointed to the split in the independence movement which emerged over the terms of the Treaty, and the divisions that would lead to Civil War.

The exhibition is presented as part of the Government of Ireland’s Decade of Centenaries 2012-2023 National Programme and also the Embassy of Ireland London’s 2021 Centenary Programme.

Ireland’s Ambassador to Britain, Adrian O’Neill said: “The arrival in London of the Irish delegation a century ago to begin negotiations on what would become the Anglo-Irish Treaty was a significant moment in the history of Ireland and the UK. 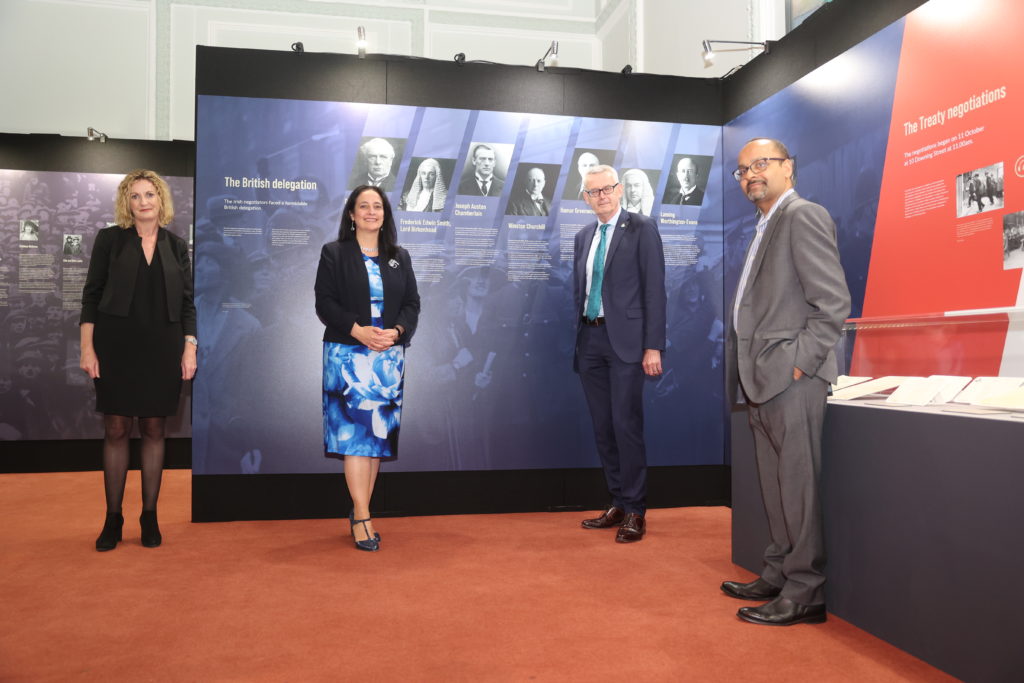 “I hope that by bringing this exhibition from the National Archives of Ireland to London, with the collaboration and support of these major Irish and British partners, we can offer people an opportunity to explore this period of our history and reflect on how it has influenced evolving relationships across these islands.”

The exhibition is presented by the National Archives and the Embassy of Ireland, London, in partnership with the British Academy and the Royal Irish Academy.

The Exhibition is open to the public at the British Academy until October 23, after which it will transfer to the Coach House Gallery in Dublin.

For further information or to book a free tour of the exhibition click here.

By: James Conor Patterson  -  6 months ago

By: The Irish Embassy in London  -  7 months ago