UNCONVENTIONAL, talented and now a leading man, Domhnall Gleeson has stepped out of dad Brendan’s shadow to take on his biggest role yet.

Domhnall Gleeson creases up, eyes widening and shoulders shaking as he tries to suppress a bellyaching laugh and avoid spraying the room with the mouthful of water he’s just gulped back.

I have just asked the young actor whether he is ready to be hailed as the next big rom-com dreamboat — what’s so funny about that? — but a line in his new film About Time may go some way to explaining his mirth.

By modern standards, Gleeson is, perhaps, “too pale, too skinny, too ginger” to be your stereotypical leading man.

Then again, he has, in the recent past, dealt with this very topic. In an interview with The Guardian last year — headlined ‘Handsome Is Not Really Where I’m At’ — he confessed to feeling that he was not “built like a leading man”.

Yet it’s difficult to imagine him blending into the background, either — primarily because of that shock of red hair inherited from dad and fellow actor Brendan, but also because he radiates an easygoing, likeable personality and bucketloads of charisma.

“First of all, I can’t believe you just said ‘dreamboat’,” he giggles good-naturedly, leaning back in his chair at Dublin’s plush Merrion Hotel, dressed casually in a t-shirt and jeans, hippy-style bracelets and friendship bands wound around his wrist.

“Yeah, they ran with that as the headline, and it made me look like I turned up as this uncomfortable wreck who’s really either self-deprecating in a fake way, or that I just obsess about how I look, or something like that.

"The reality is that if I’m out with my friends, I’ve never been the person who all the girls come up and talk to — whereas I’m sure if you’re somebody like Hugh Grant or Matthew McConaughey, that’s what happens. That’s what I was trying to say.

"I mean, perhaps I’m slightly unconventional as a leading man, but at the same time I think that’s what I have to offer. I don’t think that I would ever slot into a part that was written for the tall, dark and handsome type, but I’ll give it a shot and do something different with it.”

I point out that the message board on his IMDB page contains threads  entitled both ‘This kid is amazing!’ and ‘He looks like such a b*****d’, at which he laughs uproariously.

“I have seen that, actually, my friend sent it to me,” he says, grinning. “It might be a valid thing: I went on Google Images afterwards and thought ‘Actually, I do look like a bit of a b*****d,’” he quips.

"If you smile, you’re a schmuck, and if you look serious, you’re taking yourself way too seriously and think you’re a ‘movie star’. You can’t win.” 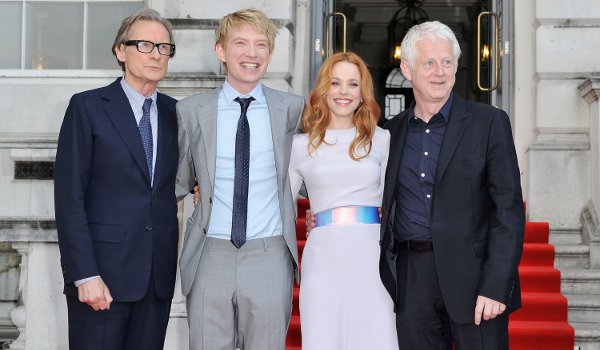 In any case, the Dubliner’s stock is set to skyrocket in the coming months when About Time hits cinemas.

At its heart, the film is a romantic-comedy — director Richard Curtis (Notting Hill, Love, Actually) is at the helm, after all — but with elements of time travel, alternate realities in its make-up: think a blend of Groundhog Day, Sliding Doors and Before Sunrise.

Gleeson plays the bumbling Tim, whose dad (Bill Nighy) reveals to him a unique trait amongst the males of the family — the ability to travel back in time.

“It kind of wasn’t my idea,” Gleeson says, smiling. “To a certain extent, you’re always at the mercy of the casting director’s imagination — whether they can see past the fact that you might not be the ‘typical’ person for the role.

"I was doing Anna Karenina, which had the same producers as About Time.

"They liked what I was doing in Anna Karenina, I guess, and they said ‘You should meet Richard about this’. It was brilliant to meet him, because I loved his stuff; he co-wrote Blackadder, know what I mean?!

“When we met, I looked a bit like Alfred Lord Tennyson, because I had this huge beard from Anna Karenina — I did not look like a 21-year-old,” he laughs. “Then we did a table read, and I had to do a very long audition of five scenes… I had to fight pretty hard for it, and I’m sure a bunch of people passed on it — and then I got to do it!

"I got really, really lucky. But I did work hard, too.”

Working with someone like Curtis on such a mainstream film was something of a safety net, Gleeson agrees.

Although he had touched on skewed versions of both ‘romantic’ and ‘comedy’ in Tom Hall’s Sensation in 2010 — in which he played a farmer-turned-pimp — this provided a more conventional approach to the genre.

“I’m not a big guy for rom-coms, but Notting Hill occupies a different sort of rom-com plain, and that’s what made me feel like it was a good idea to do it,” he nods. “Apart from Richard’s calibre, I felt like maybe I’d be able to bring something new to it.

"It was a different sort of thing: you had a chance to breathe a little bit more, a chance to relax, a chance to smile — I haven’t done a huge amount of smiling in any of my previous work! You also know that it’s not going to be a cynical exercise.

“What really became clear to me when I met him was that there was nothing false about the way his films present the world.

"I think to some people, because it’s coming from a place of love, that somehow means that it’s less edgy, or something, than another film. Then you actually meet the man, and he’s incredibly funny and he’s got a dark sense of humour on occasion, which I love.

"But he’s also all about love; he really means it.”

As much as the film is about the romance between Gleeson’s Tim and Rachel McAdams’ American student Mary, a deeper and more heart-tugging thread focuses on his relationship with both his self-destructive sister and his father, brilliantly portrayed by Nighy. 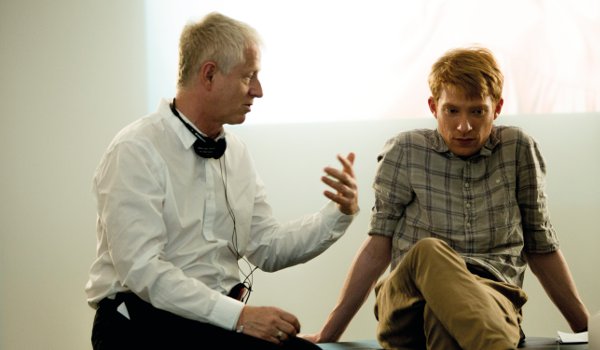 Domhnall Gleeson on the set of 'About Time' with Richard Curtis

Gleeson’s own relationship with his father is a topic approached with caution; he has had his fair share of dismissive referrals as ‘Brendan’s son’ over the years, so it would be understandable if he was reluctant to discuss his parentage.

“No, no, not at all: I love my dad and I’m proud of my dad,” he says, smiling. “Did that aspect of the script appeal to me? Of course it did, but it felt real, also. In a way, it’s not a movie about time travel at all.

"It was a big, multifaceted role for a ‘mainstream rom-com’, but I couldn’t believe that I got the chance to do it.”

Nevertheless, Gleeson has had his fair share of ‘big roles’ in recent years. He is versatile, too.

To many, he will be most familiar as Bill Weasley, the elder brother of Ron in the Harry Potter franchise, but he has also undertaken roles in rock biopics (portraying Bob Geldof in When Harvey Met Bob), sci-fi blockbusters (in Dredd), period dramas (the aforementioned Anna Karenina) and westerns (the Cohen Brothers’ True Grit) over the last few years.

Acting was the family trade, but it wasn’t necessarily an immediate choice for the young Domhnall, who also sidelines in writing and directing his own material.

His 2010 short Noreen (in which he directed dad Brendan and brother Briain) was extremely well-received, while various comedy sketches written and acted for RTÉ sketch show Your Bad Self and last year’s Immaturity for Charity sketch series exhibited his comic timing and quirky sense of humour.

“I’m getting to work with people who I stand to learn a lot from, if I’m clever about it,” he nods. “So I’m trying to take that in and use that.”

Although he has enjoyed a fruitful career on the silver screen, it was while treading the boards that the young actor became infected with the performance bug at the age of 19. His first acting role saw him nominated for a Tony award — not bad going.

“I always liked making little movies with my brothers and my friends, just on a camcorder,” he explains. “So that’s what I did in college — film and broadcasting, basically. Then I read The Lieutenant of Inishmore by Martin McDonagh, and that made me want to be an actor.

"I was interested in dabbling in it to see, because there’s no harm for a director to act to see what you’re dealing with — and that works the other way around, too.

"I was 19 and in London doing a play, and people were laughing and enjoying it every night — and the play remains one of the best things that I’ve ever read. So it was a case of ‘If this could be your life, that would be amazing!’

“Of course, it’s not your life because not every job is a Martin McDonagh job — but it gave me the kick early on, the headstart of knowing what it can be like when it’s good. And it also gave me a bit of belief, because it went well and people liked me in the play and Martin liked me in the play, which was a huge deal for me.”

Gleeson more recently worked with McDonagh’s brother John on his forthcoming film Calvary, but he also drew inspiration and, as he puts it, “learned things” from another Irish actor, Michael Fassbender, on Lenny Abrahamson’s Frank earlier this year, a film loosely based on the life of eccentric papier-maché-headed musician Frank Sidebottom.

“I think I learned so much on Richard’s movie by working with Richard, Rachel and Bill, but with Fassbender, I really tried to pay attention,” he explains.

“I’m a slow learner, so I don’t absorb stuff until after the experience a lot of the time — but I can’t wait to get back to work to apply some of the things I’ve learned from working with people like Michael.

"I love the choices he makes, I love the way he works, and I admire him a lot.

"We had very good fun making the film, and I think it really stands a chance at being good. I think Lenny is a very, very skilled filmmaker, who I really connect with, and I think the film will be good. It’ll be unusual, but it’ll be good.”

He claims that he has no strategy for whatever comes next, but Gleeson’s star is clearly on the ascent. He is currently filming Alex Garland’s new sci-fi robot flick Ex-Machina with Alicia Vikander and Oscar Isaac, a film primed to be an impressive addition to an already imposing CV.

All of this without succumbing to the ‘film star’ lifestyle or even relocating from his Dublin home to London or Los Angeles; he’s not in a bad position for an actor who has just turned 30.

“I’m getting to work and getting to afford the cost of living by acting, which is unusual and is very lucky.

"I’ve always kind of thought, for some reason, that I wouldn’t make it to 30. I really thought that all the way up to turning 30; I had a dream when I was a teenager that that age was the limit, so I tried to get as much done as I could,” he chuckles, stretching his long limbs.

“Maybe I should change it to 40, so that I keep working hard to fit everything in! But no, I don’t really have a strategy for whatever comes next, because that would be a stupid thing to do.

"You’re really at the behest of what other people think you’re able to do and will let you audition for, and stuff — so I’ll just keep plugging away. Just keep trying to be a good actor, I guess.”

About Time is released nationwide on September 4.