IN 2013 Irish comedian Jarlath Regan took a leap of faith and moved to London, having had the concept for his now award-winning podcast An Irishman Abroad fall on deaf ears back home.

Three years on, it's now Ireland's number one show of its kind.

The Kildare-bred stand-up speaks fondly of the “second chance in life” that London has given him and his young family.

Though a proud Leinsterman at heart, you get the feeling that Regan has settled in to the idea of being a Londoner, and the opportunities it can give his six-year-old son.

“I left Ireland when it was on its knees,” he says, reflecting on the aftermath of 2008’s global financial meltdown which spelled an end to the Celtic Tiger boom in Ireland.

“I really do give England a lot of credit. Since moving over, my wife and I have definitely got a sense of how fantastic a country this is, how well-run it is, and how welcoming people are to the Irish.

"There’s really no comparison between my son’s upbringing and mine. I grew up in the countryside of Curragh, Kildare.

"My dad was a small horse trainer and I had very few neighbours. I may as well have grown up on the Skellig Islands in comparison. Whereas my son lives in Gotham city,” he jokes.

Regan’s new show, Arseways, runs until August 28 at the Edinburgh Fringe Festival 2016. He’s been coming to the Fringe for over a decade now.

A “better constructed” and “even more satisfying” spectacle than his previous shows there, he feels that the Fringe and the madness that comes with it has honed his craft more than anything else.

“When I started coming up here it was a mad scramble,” Regan recalls, having first made a stab at the festival in 2005. 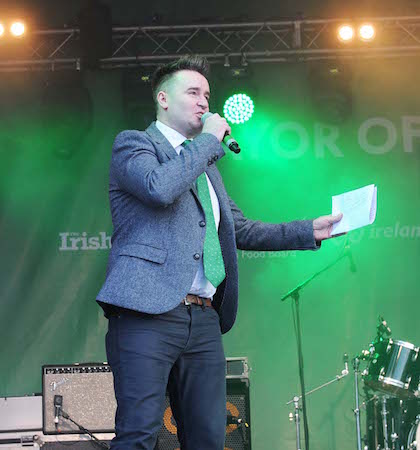 “You gathered together whatever scraps you could find, anything that resembled a joke, and you threw it into the pot. I serve people this comedy stew 30 nights in a row, and like any stew, sometimes it was appalling and sometimes it was just right.

"Today I have a show I’ve worked on for two years. I’ve stepped out of that kitchen and into a workshop, where even though the tools are the same, everything is crafted that much better.”

Arseways may have been two years in the making, but when Britain voted to leave the European Union on June 23, everything seemed suddenly back up in the air for the 35-year-old.

“Right from the off, the show begins with Brexit,” Regan explains. “When the gay marriage referendum went through back home, it was like my hopes for Ireland were confirmed.

"With Brexit, the opposite was the case. All of the things you rattled out of your idea of the place after meeting so many great English people and being so welcomed turned out to be real things. Or at least, that’s was the doomsday feeling."

Though the EU Referendum may not have resulted in the outcome he would have wanted himself, Regan nevertheless welcomes the opportunity to draw from a new dawn in the world of political comedy.

The chance to perform to ‘out rooms’ full of people who openly disagree with him hasn't phased him either.

“I know here in Scotland I’ll be preaching to the choir,” Regan quips, considering Scotland’s own vote to remain in the EU.

“But I’ve been in out rooms and have made these jokes about the silliness of Brexit. I think that’s what comedy is all about.

"It should be entertaining for people who disagree too. If you go and see Jimmy Carr you might not agree with his putting down of certain sections of society, but you will certainly be entertained. 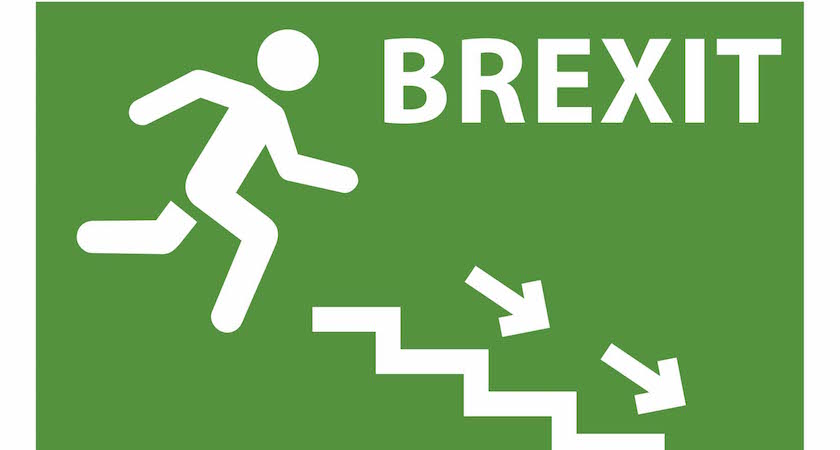 “This is a really unique moment for stand-up. For so long, politics was off the menu. Audiences found it too ranty and preachy.

"But then in the space of a week following the vote, every single comic in Britain was expected to do their 10 minutes on Brexit. There’s been an awakening, and audiences know now what good political comedy is.”

Having performed to a pro-Brexit crowd, Regan is reminded of some of his shakiest moments in stand-up, thankfully long ago now.

From the days of performing to empty rooms to a particularly rueful experience in a prison, he’s been through it all.

But he has a hard time revisiting some of the worst experiences.

“I went through some therapy a while ago, and it became obvious that when something goes wrong in stand-up, there’s a mental health imperative to delete and destroy the experience, otherwise you couldn’t carry on.

"Those memories would haunt you like Goose’s death haunted Maverick in Top Gun.” 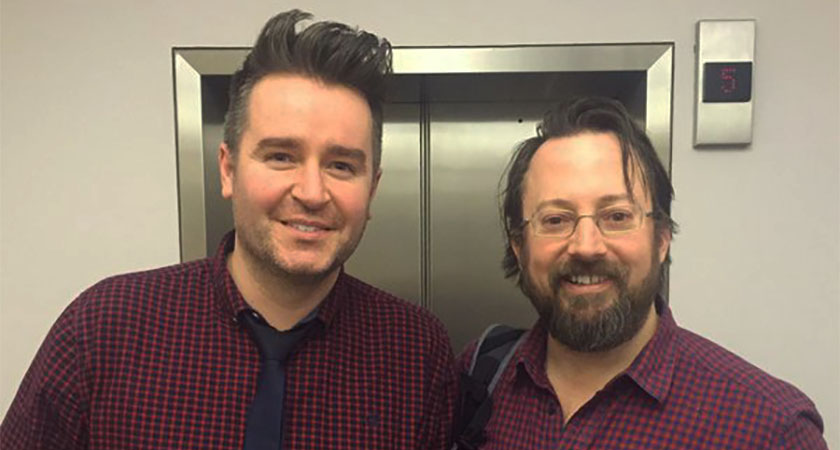 Jarlath and fellow comedian David Mitchell. Picture: Jarlath Regan/Twitter
If you couldn’t already tell from the Batman and Top Gun references, Regan is a child of the 1980s.

Growing up in Irish schools at that time, he distinctly recalls anti-English sentiment being drilled into him from a young age.

He's not so sure how it has subconsciously affected his view of his new home.

“I shook off a lot of the run of the mill, anti-English xenophobia that those of us who were in Irish primary schools in the 1980s were raised with," he says.

"The history was drilled into you and it was hard not to have a hangover from that. But moving here, you realise how silly it all was, how disconnected the English are from those ancestors.”

As fond as he is of Britain today, Regan can’t help but think that the Irish still do certain things better.

"Brexit if anything made me more aware of how good Irish people are at double-checking and admitting they’ve made a mistake,” Regan says with a chuckle.

“That’s a huge theme of Arseways. If you make a decision like that which so affects the country’s economic future, why not double-check the will of the people is still the same after all this chaos has ensued?”

Beyond the dark cloud of politics, things are shaping up well for Regan.

His award-winning show An Irishman Abroad is already Ireland’s most downloaded podcast, and he has been in talks with the powers that be to roll the production out to other media. 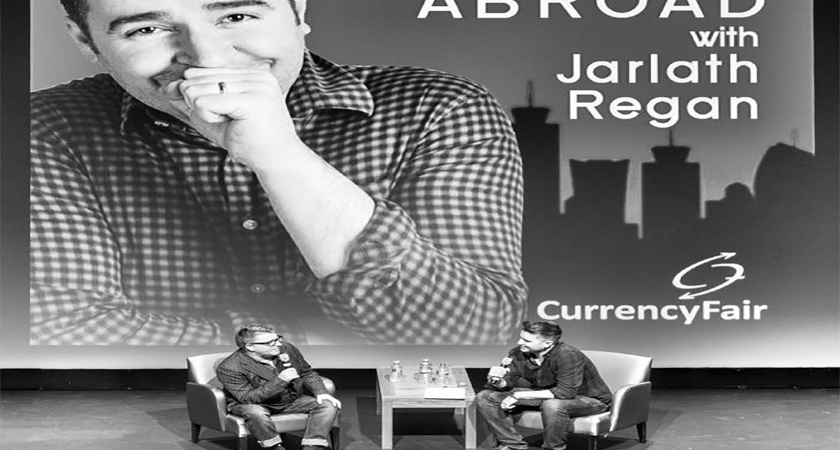 Jarlath's show An Irishman Abroad has recently celebrated its 150th episode. Picture: Jarleth Regan/Facebook
“I'm talking to a number of different people about taking the show to TV, and some of those conversations are quite far along.

"I’m also in the advanced stages of producing spin-offs in the same vein but without necessarily being confined to an Irishman abroad, with An Irishman x, y and z in the works.”

Some fear that the personalised freedom that characterises podcasting might be under threat from the sticky fingers of men in suits, but Regan is more optimistic.

“The simplicity with which you can get your work exposed is so readily available now that if you and I were to make a podcast about Lego tomorrow, and Taylor Swift tweeted about it, we’ve already blown the doors off.

"We’d have 100,000 subscribers straight away. Provided we then kept up the quality and standard, we would be alright.

"After all, it’s a three-legged stool. Skill, determination and luck are what it's all about.

"Podcasting is still a world where I feel like anything is possible.”

Having marked episode 150 only two weeks ago, Regan has been in a reflective mood.

At the Fringe, he intends to put that to good use.

Part of his set gets the crowd going with a hilarious comparison between what was expected of his pub-dwelling father, and what is now expected of him.

But he has been careful not to downplay the achievements of men of old compared to those of this cushier age “of instant gratification and information.” 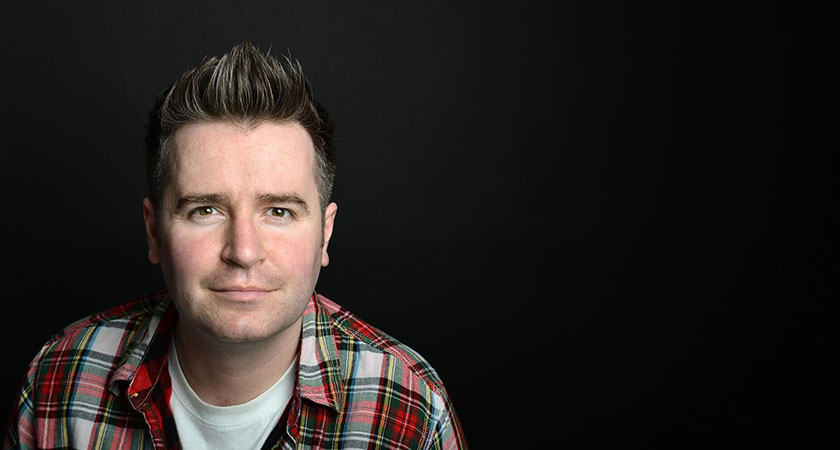 "On the one hand there is a part of the show that deals with the difficulty of being a ‘good guy’ nowadays when expectation is so high.

“But in the same breath, my dad and a lot of dads from the 1980s raised their children with no money. Even less than what’s considered no money nowadays,” he adds.

Now a father himself, talk of his own dad brings Regan’s mind to thoughts of his young family’s future.

“Provided my son is a well-adjusted, happy 16-year-old, I will be happy in a decade’s time. Ultimately, I just want to be proud of what I do and reach as many people who like it as possible.

"No one wants to perform alone in their basement in the evening.

“I went back to Ireland for the Vodafone Comedy Festival, and I walked down a street that was essentially closed when I left. And it was full of life.

"All I know is that England gave me a second chance which Ireland unfortunately couldn’t, as with so many Irish people.

"But I’d like to go back one day. Who knows? Maybe Ireland will give me a third chance in life.

“Bizarrely, I left behind all the doom and gloom in Ireland for England. But last week, I couldn’t wait to get away from the Brexit gloom here and get back.”

Jarlath Regan is currently performing his new show Arseways at Edinburgh Fringe Festival 2016. Click here for more details on the show, An Irishman Abroad and his new app based on the popular podcast.