BORN to Dublin parents in 1960s London, it's only natural actor Shane Richie grew up surrounded by Irish music and culture.

But it was five months filming in Ireland in 2016 for new BBC series Redwater, that really sealed the deal for the TV favourite who fell in love with the country so much he almost didn't come back.

The new drama, which features his screen wife Jessie Wallace and follows tempestuous EastEnders couple Kat and Alfie across the Irish Sea, was filmed in Dunmore East, Co. Waterford.

“They turned Dunmore East into this fictitious town called Redwater and the local council and businesses got involved and embraced renaming the town," Richie said.

“The locals were fantastic, even my wife would say are you coming home this weekend and I'd say 'not really love cause we're having the food festival'"

In fact, Shane and Jessie enjoyed their time in Ireland's sunny south east that they embarked on a road trip.

“Myself and Jessie went to Schull in west Cork, for the film festival and spent a couple of days on the road just touring, and then I went off on my own for two days and just got to Cork and didn't get out.

“I just sat in the pub and listened to poetry and enjoyed some of the local bands, it was like the filming got in the way," he joked.

Released in May 2017, Redwater sees Kat and Alfie arrive in a fictional Irish harbour village, in search of Kat's long-lost son.

“It's a big show, and I'm really excited," Richie said. "Originally it was meant to be shot in Spain but series creator Dominic Treadwell-Collins' family are all from that part of Ireland and he tied it into an EastEnders storyline and decided Kat and Alfie were going to Ireland."

With an all-Irish cast, the series also stars Downton Abbey's Maria Doyle Kennedy and Ian McElhinney from Game of Thrones.

Award-winning Danish director Jesper Nielsen is at the helm and has promised a fantastic story.

"It's a story about how the strong bonds of love in a family can hold everything together, and yet at the same time - destroy everything," he said.

"It has echoes of a Shakespearean drama, told in a rich cinematic style, loaded with humour and suspense."

Star of the series, Richie said: “It's an ensemble piece although Kat and Alfie are very heavily featured. She's trying to find her son, and finds out some of his secrets and Alfie's trying to deal with the brain tumour and it all comes to fruition over six one-hour episodes."

And it looks like the series might even make it over the water to the US - something Richie says would have the tourists flocking to picturesque Dunmore East.

“We're looking for it to be shown in the States," he added. "I can see hundreds of people turning up in Dunmore East, I mean for the tourist attractions alone, it could be wonderful for the area.

But will the series have the Poldark effect where visitors turn up to the area looking for Kat and Alfie?

“Yeah,” Richie jokes. “But you won't see me wandering around with my top off love!” 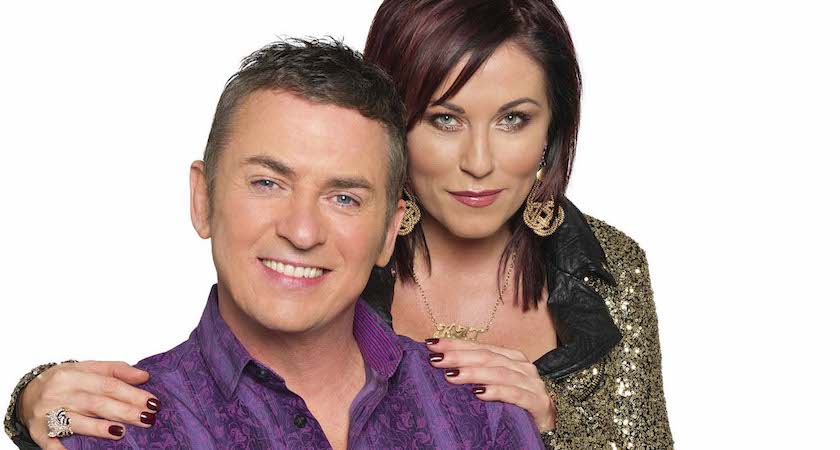 With his mother from Whitehall and father from Coolock in Dublin, growing up in Harlesden, north west London, Richie was surrounded by Irish culture.

“I was always told I was conceived in Dublin and since my mum was so young at the time, they came to England," he said.  “The Irish Post was a regular feature in my house as my dad used to run Irish clubs when they came here.

While later in his professional career Shane became a regular on the comedy circuit - even releasing a number of albums - his first stage encounters were in his dad's Irish clubs singing with Irish bands and watching Irish comics perform from the age of 10.

“I was just surrounded by the whole Irish culture, yet, where I was growing up was predominantly Irish or black, so I was surrounded by reggae and Irish music, and that was a strange combination," he said.

“I used to go around collecting glasses, go onstage to sing with some of the bands and later on I would help call the bingo.”

In November 2016 Richie was honoured with an Irish Post Entertainment Legend Award for his outstanding contribution to the industry.

"What a great honour and it beats Sexiest Male 2001 hands down,” he joked.

He credits his Redwater co-star Fionnula Flanagan with putting him back on touch with his Irish roots.

“It’s all down to Fionnula really," he said. "While we were filming in Ireland, we got a lot of downtime and we spent a lot of time together.

“I started talking to her about my background, and the next thing I know she asked me to come with her to The Irish Post Awards, then I get a letter saying I’m being presented with an award," he added. “It meant I had to get my suit cleaned."