CONFESSION TIME…I have never picked up a Patricia Scanlan novel in my life. I know her name, I see her books everywhere (seeing them abroad makes me proud that an Irish author is so widely published) and yet I have never read one of her works.

This thought is guiltily on my mind as we chat and then it strikes me —if she can write a story as well as she tells one in person she must be one hell of a novelist.

Scanlan is funny, sparky and a great conversationalist. For example, we start with a story about her grandfather —a lighthouse keeper in Co. Wexford in the 1940s, who was blown apart by a World War II mine that washed up on Tuskar Rock while he was working there.

Judging by the numbers, Scanlan is a delight to read too. She’s sold over one million copies of her books, which include such bestsellers as City Woman, Apartment 3B, Finishing Touches, Foreign Affairs, Mirror Mirror, Promises Promises and Francesca’s Party.

All have gone straight to the number-one spot on the Irish bestseller lists. Her work has been published in 17 different languages over the past 25 years since she burst onto the scene with her debut novel City Girl.

Not a bad career to date for the one-time library assistant who only started writing to escape “dire financial straits”.

“I had a mortgage on a little apartment and a clapped-out Toyota Corolla that was falling to pieces and I really had to do something,”she says.

“Working as a library assistant I noticed that people would take out six Mills and Boon novels in one go. So I sat down and wrote a book called Surgeon’s Conquest in that style and thoroughly enjoyed myself. I sent off the manuscript to them and was told they were giving it ‘serious editorial consideration’.

“Then one day my dad saw this parcel come back from them and my heart sank because I knew it was a rejection. So then I remembered what Maeve Binchy said: ‘Write about what you know.’ Her books were about rural women in the ’50s…nobody was writing about contemporary Irish women in the ’90s.”

With new focus, Scanlan penned City Girl. “It went to No.1 in Ireland for six months, it struck such a chord. It was actually rejected by a UK publisher and they later had to pay a lot of money to get it and that was wonderful!”she says gleefully.

Since then Scanlan has scarcely had time to look back. Her books have been runaway successes and she recently signed a contract to have them published in China, Turkey and Brazil. Her latest work is entitled A Time for Friends. 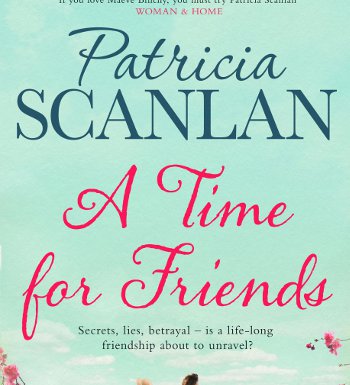 “I guess it’s what’s called ‘the universal experience’. Women have a hard life all over the world; just because you are an Irishwoman doesn’t mean that people in other countries won’t understand what you are going through. It’s the experience that people identify with. Yes my books are set in Ireland, but they introduce people to our culture.

“I’ve never felt inadequate as an Irishwoman. Contemporary Irish women are as interesting as contemporary French women or British women.”

So what is it about female Irish authors that make the literary world sit up and take notice?

“I think we have empathy. There’s a warmth to our writing that readers identify with. We write about what’s happening in ordinary people’s lives…things like looking after elderly parents, struggling with depression, juggling a job and a family, keeping a husband happy.”

Asked about the current state of Irish literature, Scanlan is positive. “I think Irish literature is in a strong place, it’s always been strong worldwide. Just look at the likes of Marian Keyes, Sheila O’Flanagan and Cathy Kelly, they are all fantastic writers. Starting off with Maeve Binchy, books by Irishwomen have gone all over the globe. We’re a nation of storytellers and Irish women tell a very good story.”

Scanlan was recently described by The Sunday Times as “the prolific queen of contemporary Irish popular fiction”, so who would she see as the upcoming princess?

She answers without blinking: “Ciara Geraghty. No doubt about it. She wrote a book called Saving Grace and it’s something I would have loved to have written. When I see a new book out by one of the female Irish writers I admire, I always put them up on my Facebook page. I love to support them. We support each other. I think Ciara is an amazing writer.”

“We know what it’s like so we don’t feel the need to put on a face, we have a good laugh together and a good moan!”

I wonder if it ever gets competitive between them then? Scanlan versus Keyes? O’Flanagan versus Kelly? She laughs.

“We all have our ‘slots’, everybody has six weeks of a ‘slot’. We’re all in different publishing companies and we have known each other a very long time. I would always cheer for a friend who gets to No.1 with her book. I would be delighted for them, that’s the way it is for us. Maybe there are some people out there who would get annoyed or irritated, but we have been doing it for so long and we know each other very well.”

So what advice would Scanlan give to any young writer starting out?

“I would say if it’s in you, it will flow out of you. Sit down and write chapter one, just write whatever comes into your head. Let it flow like a volcano erupting! Just keep it coming and coming.

“The first draft is always the most exuberant. Dermot Bolger said you should ‘write with fire in your blood and edit with ice in your veins’.

“It’s different now to when I was beginning, it’s much harder to get published what with the recession and the way the book world has been hit. Even with the arrival of e-books and self-publishing it’s harder. A lot of publishers now are concentrating on their ‘brand authors’. The book trade has been really hit. If there’s a book in you, get it written and then try get yourself an agent. What’s for you will not pass you.”

Scanlan puts her love of reading down to a childhood spent listening to her mother read to her and her siblings, four brothers and one sister.

“She used to read out loud to us when we were kids, she would read Patricia Lynch books to us. They were great books. My father would be there too, reading the paper, and out of the corner of my eye I’d notice the paper come down a bit as he became more engrossed in the story my mother was reading to us children!

“I think it’s so sad nowadays to see children with these digital devices, they don’t know how to use their imaginations.”

She says her most embarrassing experience so far involved her father and a trip through Stansted Airport, en route back to her home in Dublin.

“We had been to London to visit my uncle who was ill and I spotted my father in the bookshop at the airport putting my book into the No.1 bestseller spot on the shelves! He thought it was hilarious and I was mortified!”

As we chat, some TV footage of the London premiere of Fifty Shades of Grey flashes up on Sky News in the corner of the room. What, I ask, does Scanlan make of the Fifty Shades publishing phenomenon and EL James’100million worldwide sales? She’s not impressed, with the question or the subject matter.

“In our day we had Mills and Boon…it provided romance and the sex wasn’t graphic. It left it all to the imagination, so it was even better. I don’t get it…a PR person sent me the book and I read a couple of pages and it was so boring! It was the same kind of stuff. When you are time poor, you make good use of your reading time!”