A SEAN nós singer's haunting rendition of a classic Irish love song captivated audiences at a recent celebration of Irish culture in the English capital.

Marianne McAleer performed at a special event hosted by the Institute of Irish Studies, University of Liverpool in London last weekend.

The Somerset-based singer, an award-winning Fleadh Cheoil performer, grew up in an Irish family in Kilburn, where she learned her songs from and early age from her Cavan father, Jim McPhillips.

Best known for her traditional Irish songs and the occassional lilt, she says she learned to sing Eleanór na Rún from a Connemara singer years ago.

The tune is a tradition Irish love song from 16th century Ireland about a farmer and his sweetheart.

Scroll down to watch her perform the song below...

You could hear a pin drop as she belted out the tune at the Institute's The Irish Language: A Day of Literature, Film and Song day, held at the University of Liverpool London Campus in association with the Irish Cultural Centre Hammersmith on January 21. 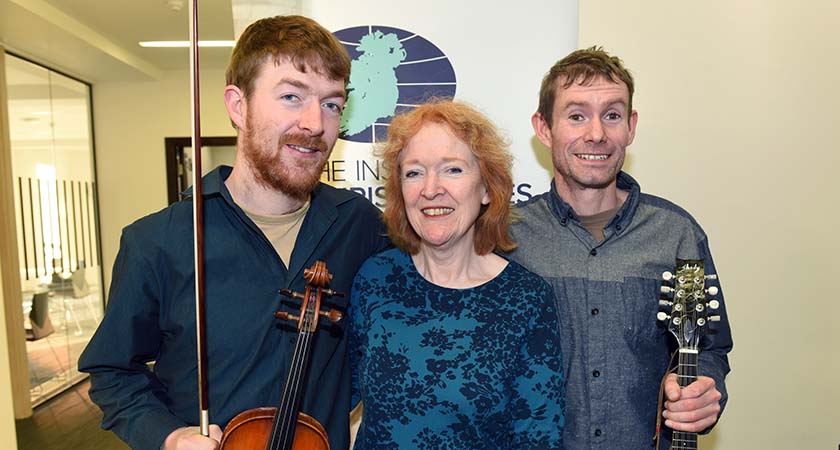 The event was opened by Professor Pete Shirlow, Director of the Institute of Irish Studies at the University of Liverpool, with a welcome address given by Irish Ambassador Dan Mulhall.

There were also short film screenings introduced by Professor Lance Pettitt and poet Seán Hutton, followed by a discussion.

The day was rounded off with a drinks reception and McAleer's musical performance, which was accompanied by Eddie Saddington on mandolin/guitar and the singer's son Finn McAleer on fiddle.

You can catch Marianne McAleer live at the Cellar Upstairs Folk Club on Saturday, March 18 at the Calthorpe Arms, London WC1X 8JR.

The day was enjoyed by a host of guests, some of whom are pictured below...