There's plenty of craic at Ye Cracke. A must for Beatles fans, John Lennon and his then girlfriend Cynthia Powell used to hang out here in college.

The perfect place to waste an afternoon, the garden has changed a lot since the days it was part of a courtyard for the local tenement slums.

The pub’s 19th century interior gives an indication of its long and changing history with ‘war room’, walls featuring pictures of a young Lennon and friends and other noted clientele.

This is a place with real character, which spills out into the beer garden, a rare treat on a balmy evening. 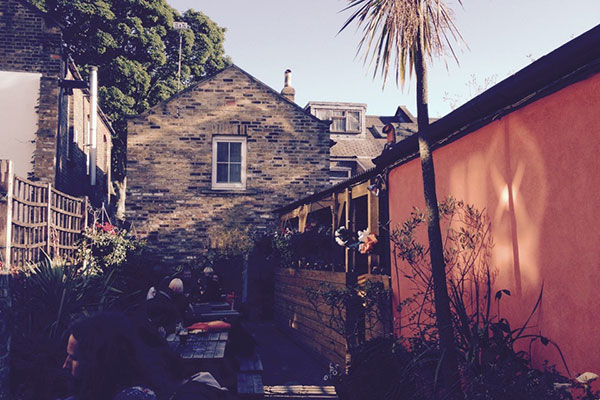 Voted one of the best Irish pubs in the world outside of Ireland, The Auld Shillelagh is a bottleneck bar with a hidden gem of a beer garden out the back.

A covered seating area with its own mini bar means you can enjoy a pint here in pretty much all weather.

When it opened its doors in 1991 it was a tiny pub consisting of the bar, some stools and a single toilet with a dart board on the door, but from there it’s grown into a favourite with loyal regulars and London’s hipster Stokey set.

The beer garden faces the sun for most of the day, while the Guinness is regularly touted as the best in North London.

Best for: The hipster set 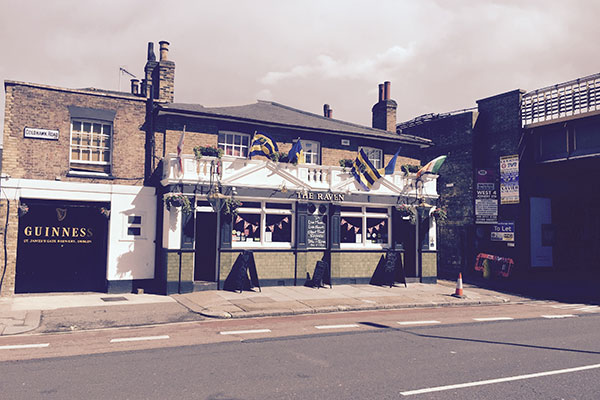 A view of the Raven on Goldhawk Road

The Raven’s unusual history makes it a great talking point over a pint.

The Raven’s proximity to Queen Charlotte’s Hospital has made it a traditional spot for dads to celebrate a new arrival.

This comfortable neighbourhood boozer does a hearty Sunday roast — locals rave about their cracking Yorkshire puds, weekly quiz nights and live music on a Friday.

The pubs higgledy-piggledy nature, and elusive pub cat, nod to the building’s history.

Best for: Wetting the baby's head 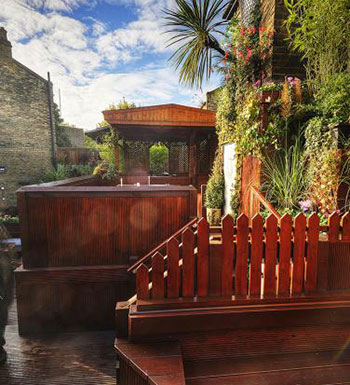 The tiered wooden deck area outside The Faltering Fullback

The Faltering Fullback is a traditional Irish pub combined with a popular Thai kitchen.

You can escape the North London traffic in this surprisingly quiet location behind Finsbury Park.

It boasts one of London’s most unusual and attractive beer gardens – you’d be forgiven for thinking you’d stumbled into Kew Gardens.

The multi-level oasis of wooden decking covered in flowers and ivy is at its blooming best in the summer.

You really can’t knock a prawn and pineapple curry washed down with a Guinness until you’ve tried it.

A reasonably priced drink in the heart of Covent Garden is a rare find, locating a decent pint of Guinness in the tourist hotspot is rarer still.

Throw in a fantastic Irish fry (with a vegetarian option available) and Philomena’s is a great start to a day in the city.

It’s a popular choice for after-work drinks for local office workers, and a convenient pit-stop for theatergoers.

If you’re not in a rush, the outdoor seating area is one of the best locations to people-watch in the capital.

Philomena’s shows a full range of live sports and is a favourite spot for Irish rugby fans.

The place can fill out quickly during the big games, with an atmosphere to match, but getting to the bar can be tricky, although the excellent bar staff ensure you're never waiting long. 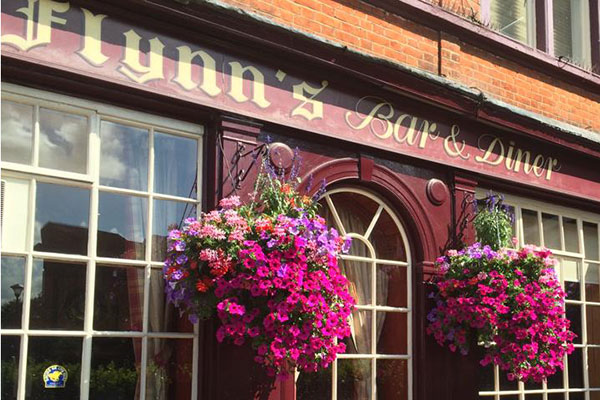 Flynn’s has been serving up live music, real ales and a generous Sunday carvery since 2005.

A decent-sized beer garden caters for over 200 people, and is populated by an unpretentious clientele and friendly staff.

Whether you fancy an evening cocktail, or are getting the lads down to watch the game with a few pints, Flynn’s Bar and Diner makes a great weekend spot.

Best for: Service with a smile

Every March the Shamrock plays host to the Manchester Irish Festival, but come summer it’s best known for its sizable beer garden, the best in Manchester I am assured.

On the outskirts of the Northern Quarter this, local pub is a real family affair – a great bet on Sunday when a three-course roast for under £12 will keep everyone fed and happy.

There is plenty of room in the enclosed beer garden for the kids to stretch their legs and outdoor plasma screens showing all the games.

An outdoor bar and log burner means you can justify staying for that extra pint as the sun goes down.

The pub enjoys a busy rota of live Irish music in the evenings and the children’s Trad session on Sunday afternoons is a nice touch. 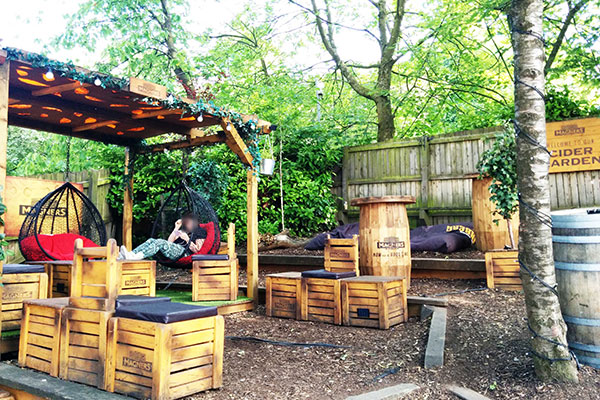 Hanging out outside Glasgow's Jinty McGintys

A no-nonsense Irish pub with a humongous beer garden, this is somewhere to take your whole group of friends.

The heated beer garden will keep you warm throughout temperamental Glaswegian summer and when the sun does get its act together, it feels like most of Glasgow heads here after work.

The crowds add to the atmosphere and the staff cope well with demand.

Live music six nights a week keeps things indoors lively but in the summer the best of the craic is in the garden.

Best for: Starting a Friday night on the black stuff in Glasgow 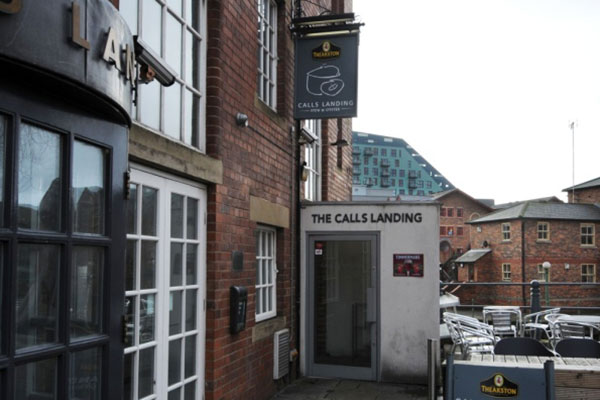 The beer garden at Calls Landing in Leeds

With its garden overlooking the River Aire, Stew & Oyster at Calls Landing attracts a crowd on a weekend.

Get there early and grab a coveted spot on the riverside balcony for fantastic views.

A wide selection of Irish whiskey from Jameson to Teeling should keep you in good spirits. As for food, the menu does two things – stew and oysters, unsurprisingly.

From spring onwards it’s all about the shellfish – delivered daily fresh from Kirkgate Market, they sell around a hundred a week and are best paired with one of their stouts.

Best for: Seafood with a view 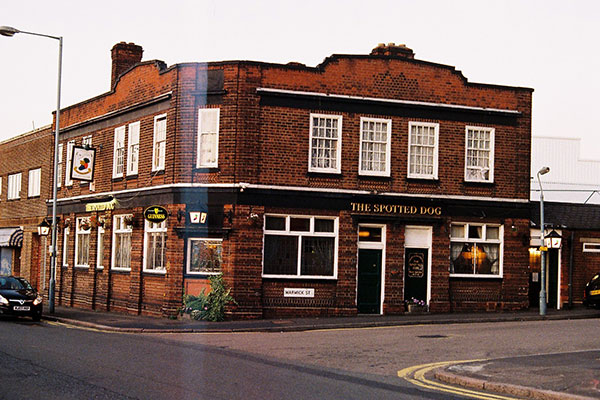 If you’re looking for a pint in Birmingham’s Irish quarter then it has to be the Spotted Dog, which was featured in gangster epic Peaky Blinders, starring Cillian Murphy.

Purchased in 1985 as a hobby by John Tighe from Roscommon and his wife Anne from Tipperary, this is a family-run project.

As much a music venue and Irish community centre as it is a traditional boozer.

A unique winter garden makes a great spot for enjoying the sun without risking the rain.

Best for: Music and film

You can see everything from a traditional Irish session to raucous punk bands here.

The spacious bar features enough plasma screens meaning everyone can see the action, whether it be rugby or GAA.

The place comes into its own at night with a giant heated courtyard and yet more giant screens.

This place is a favourite with local students from the nearby university campus and a real night out – no one goes here for a quiet drink.

Do you know a brilliant Irish beer garden in Britain? Tweet us or tell us on Facebook