Lisa Lambe (Fairy, centre) and company in rehearsal for Hex at the National Theatre

You are currently in rehearsals for Hex, which opens this month. What attracted you to this production?

Quite out of the blue, I was invited to join the National Theatre for this show by the Artistic Director, Rufus Norris.

I was of course really flattered to be asked, and on reading the script by Tanya Ronder and hearing the incredible music by Jim Fortune, my interest was piqued, and after meeting them and the rest of the creative team I just had to agree to join them. 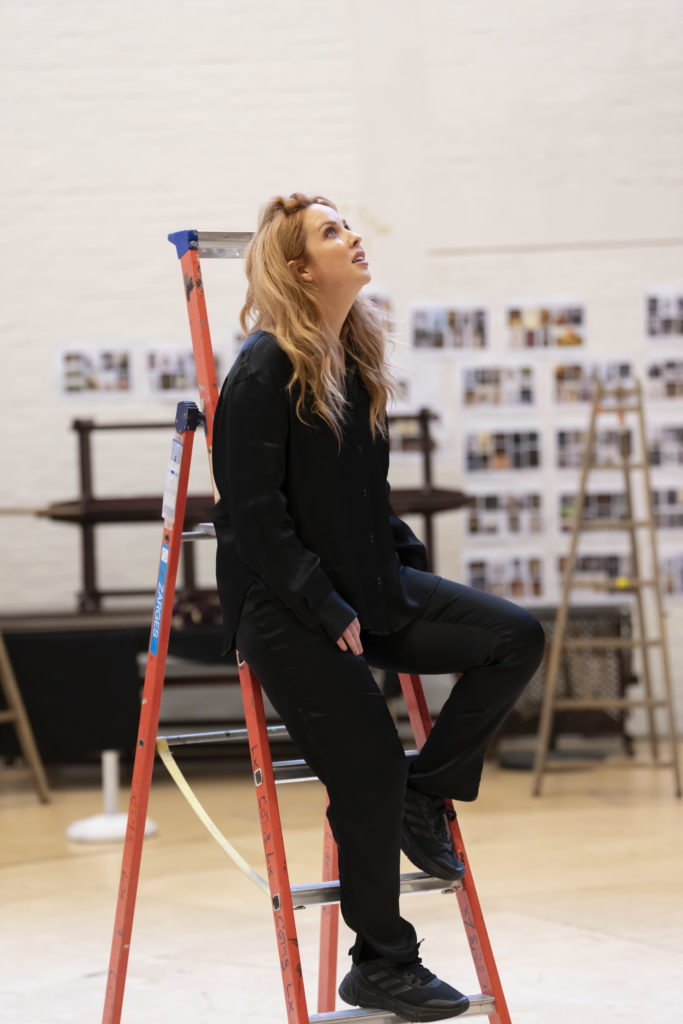 Lisa Lambe (Fairy) in rehearsal for Hex at the National Theatre

Is it recognisable as a take on the Sleeping Beauty fairytale?

Yes, it is, however it is not the Disney telling of the story.

The Disney version ends halfway through the original story.

The initial springboard for Hex was 'The Sleeping Beauty in the Woods' by Charles Perrault (1697) which in turn was inspired by an earlier European Folktale from 1330's.

This musical returns to the whole story with darker imaginings for its roots.

You play the role of Fairy. How would you describe your character?

In a way, what we see in this version is Sleeping Beauty through the eyes of the fairy, an outsider and a lonely figure, who ends up putting a hex on the princess that makes her sleep until she is wakened by a winning prince with a kiss.

Fairy spends the next 100 years trying to resolve the hex and find her own way and figure out who she is.

What drives the fairy to do what she does and her striving to be loved and accepted leads the audience through the story.

What is most challenging about taking on this role?

Everything. But it is a great challenge.

It is physically demanding, with hours of training dedicated to special effects - including flying.

The extraordinary score by Jim Fortune is a pleasure to work on, and has some truly amazing songs to conquer, it is so fantastic to be in a rehearsal room with such an incredibly talented accomplished team.

Fairy boasts an impressive costume and make-up – does it take long to get stage ready?

Well, we are still at the stages of tweaking and developing the costume design with the brilliant designer Katrina Lindsay, for Fairy, the costumes really bring the world of Hex to life and technicolour and scale.

It looks like the musical will be a great experience for audiences – is it as much fun to rehearse?

It is great fun to be in the room with such a talented team, who are without doubt amongst the very best performers in London.

I am in awe at the brilliance of the ensemble, who include some of the funniest and hardworking actors I have ever worked with.

Tomorrow’s stars, without a doubt. 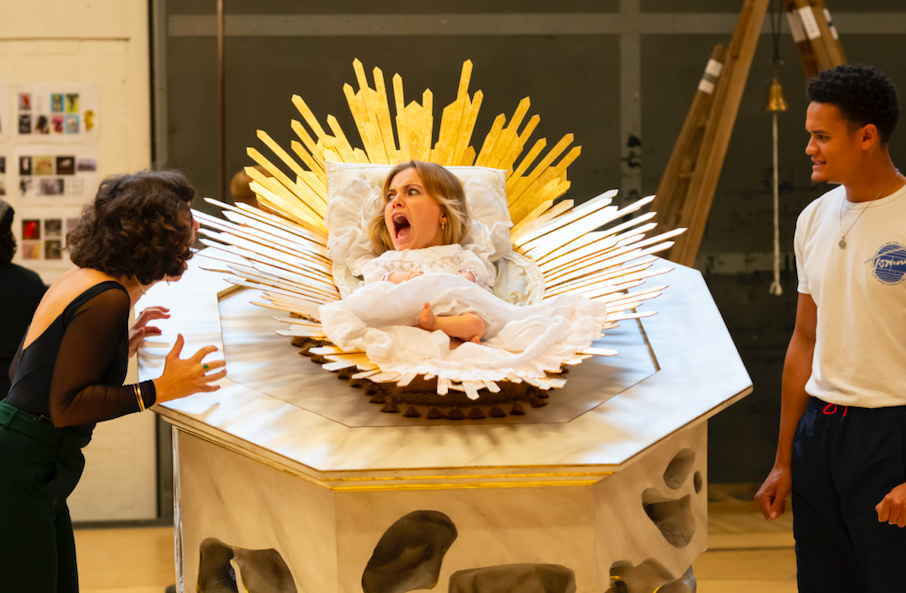 Will you away from your home in Ireland for the duration of the musical – including Christmas/New Year?

Yes, the performances take me through until the middle of January, so I am looking forward to mulled wine and Christmas markets in London this year.

What are your highlights of the production?

We haven’t opened the show yet, but I imagine that the first time that I fly in the Olivier Theatre in the air will be a moment to remember.

I love to sing and the incredibly beautiful score by Jim Fortune and Rufus Norris, being brought to life in the Olivier Theatre - such an iconic theatre, to over a thousand people, will be a moment I won’t forget in a hurry.

How does this role compare to your previous stage work?

I always love the work that I am making, whether it is recording an album, playing a gig, developing a show or performing in a theatre.

The key for me is not to look behind me or in front of me and simply give everything I have to the moment I am in.

I have been very privileged to work with some amazing artists at home in Ireland and throughout the globe in my career, and although I have performed in some world-famous venues, this feels like a different kind of challenge.

It is challenging me in ways in could never have anticipated, but live theatre is where I feel most at home, and this is such a special production.

Is this your first time working at the National Theatre?

Yes, I have worked many times at the National Theatre of Ireland, but never in London, and although it isn’t a thing I ever had ambitions to do, I am loving every minute of the experience. 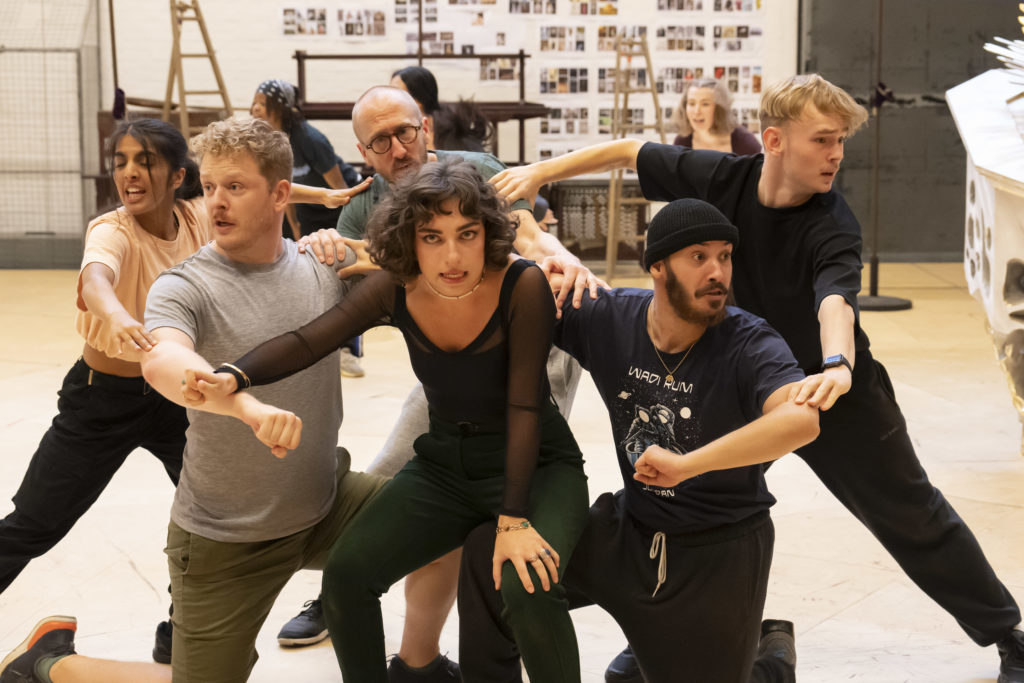 Company in rehearsal for Hex at the National Theatre

You previously worked with Celtic Woman, how do you remember your time with the group?

I had an extraordinary time in those short years working with a brilliant show to huge audiences, but the only thing a person can ever really do is keep moving forward.

Take a deep breath and a big leap forward without hesitation, try never to look back.

Keep creating, keep being curious and forge a path towards the future. Always.

You have also cultivated a successful solo career over the years – what’s next for you musically?

I was commissioned by the Famine Museum to bring to life some of my folklore and ballad song research into some of Ireland’s forgotten songs and traditions.

It is called Night Visiting which is a live show that reconnects us to the role that Irish night time social house visits once played in our oral traditions.

In that show I collaborate with musicians and performers to create an evening of old songs, stories and tunes from around the hearth.

A few weeks after I finish in Hex I will be at the Tradfest in Dublin performing Night Visiting in the Pepper Canister. That will also be on tour in 2023.

Hex runs at the National Theatre’s Olivier Theatre from November 26 until January 14 (recommended for ages 8+). Tickets are on sale now here.