ALL LESSONS focused on World War One when a Birmingham school dedicated a full day to the centenary of the outbreak of the war.

Carrot roll, toad in the hole and bread and butter pudding were all on the lunch menu at St Paul's School for Girls in Edgbaston for the commemoration, which saw teachers and pupils swapping their usual uniforms for those of WW1 land girls, nurses, soldiers and munitions workers.

Scheduled lessons at the award-winning Catholic school also took on a 1914 theme, with particular emphasis on learning how women were utilised in the war and how soldier’s wives coped with the separation.

“It is very important that World War One is not remembered in a nostalgic, whimsical manner,” a St. Paul’s spokesperson told The Irish Post this week.

“We hoped on the day that girls would be reminded of the hardships, the sacrifices, and the brutality of war, but also the advances in medicine, technology and women’s lives.” 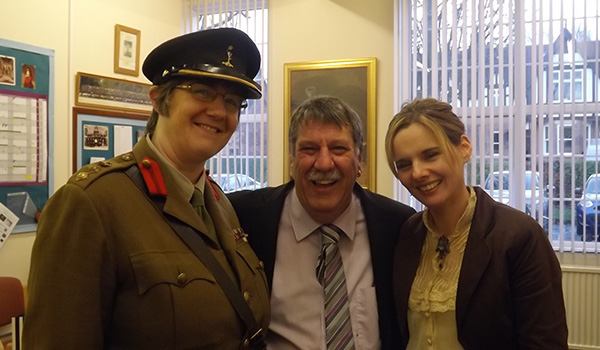 They added: “The women of the First World War were resourceful and resilient and we wanted our girls to be able to connect with them during our day of remembering.”

St Paul’s, which is the only all-girls Catholic school in Birmingham, boasts many second and third generation Irish students and a number of Irish teachers.

On the day they welcomed Birmingham historian Professor Carl Chinn, who explained the impact WW1 had on the women of the city and the city itself.

Members of St Paul’s’ very own Air Cadet Unit, England’s only all-female unit, also performed drills throughout the day, while workshops took place with a soldier who had served in the trenches and a former military nurse.

The St Paul’s Girls Newspaper team are currently working on a special commemorative edition reflecting the experience which will be produced in time for Christmas.

In Pictures....St Patrick's parade and festival in Birmingham