On this day in 1866: Fenian Brotherhood invades British-ruled-Canada in attempt to force UK to grant Irish independence

The charge of the Fenians (wearing green uniforms) under Colonel John O'Neill at the Battle of Ridgeway, near Niagara, Canada West, on June 2, 1866. In reality, the Fenians had their own green flags but wore a very mixed bag of Union and Confederate uniforms (if they still had them, or parts of them left over from the Civil War), or civilian garb, with strips of green as arm or hat bands to distinguish themselves. (library and archives canada, c-18737)

WHEN one thinks of Ireland's struggle for independence, it's unlikely Canada would ever pop into your head would it?

While the long and arduous road toward eventual freedom from British rule was beginning to build momentum back home, 3,000 miles away just over the Canadian border, a band of Irish-American soldiers were gathering, ready to launch an invasion.

They were known as the Fenian Brotherhood, a New-York-based Irish Republican organisation founded in the 1850s. Their aim: Wreak enough military havoc in Canada - which was ruled by Britain at the time - in order to force the UK government to begin negotiating Irish independence.

It was a daring move, not least because British garrisons stationed in Canada meant the Canadians had the edge both in terms fo numbers and in supplies. But the Irish had expertise, and they had strategy.

The Fenians took advantage of the ready supply of the ample number of unemployed young men who had emerged from the US Civil War with some degree of military training. Their plan was to take Canada temporarily hostage in the hope of demoralizing British rule in Ireland by precipitating a political crisis in Britain.

The Battle of Ridgeway, as it would become known, was the largest of the Fenian Raids - which were a series of violent engagements carried out by the Brotherhood in British military centres between 1866 and 1871.

Though still very much a ragtag army, around 700 Fenians gathered on the shore of the Niagara River during the final weeks of May 1866. They made little attempt to hide the invasion attempt, as they hoped British authorities would be made aware of their intent.

On the night of June, the Brotherhood marched through the night over the border before reaching the town of Ridgeway, Ontario. As day broke the next morning, they clashed with 850 advancing Canadian militia.

In the first hour of the battle, the Canadians appeared to have the upper hand, driving Fenian skirmishers back towards the border. Then something went wrong: to this day, it is not clear exactly what.

Brigadier General John O'Neil, who was leading the Fenians, sought to take advantage of the confusion, and ordered a bayonet charge, which completely scattered and demoralised the inexperienced Canadians. 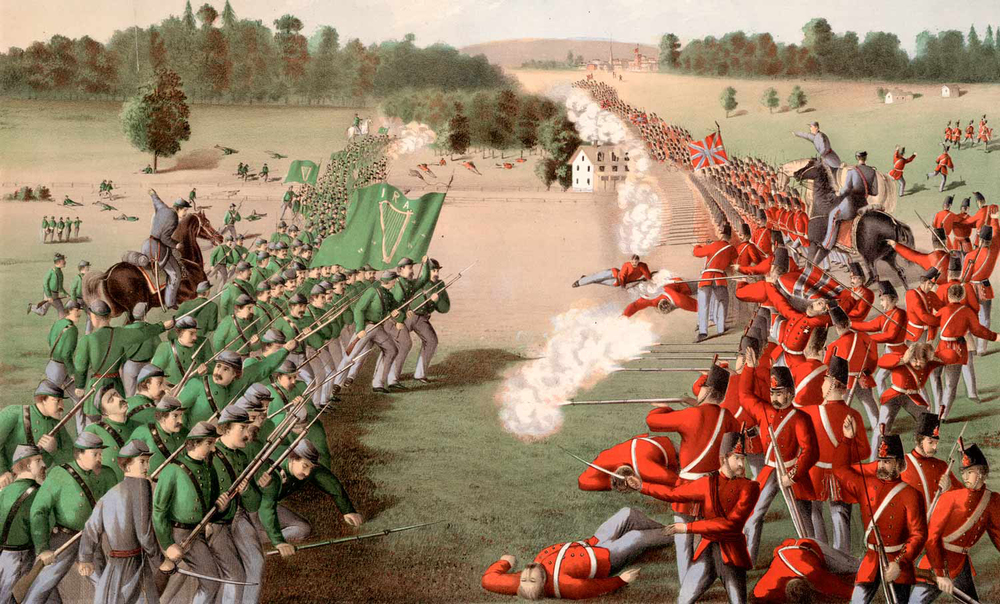 The charge of the Fenians (wearing green uniforms) under Colonel John O'Neill at the Battle of Ridgeway, near Niagara, Canada West, on June 2, 1866. In reality, the Fenians had their own green flags but wore a very mixed bag of Union and Confederate uniforms (if they still had them, or parts of them left over from the Civil War), or civilian garb, with strips of green as arm or hat bands to distinguish themselves. (library and archives canada, c-18737)

The Fenians took and briefly held the town of Ridgeway, and claimed victory. But, expecting to be overwhelmed a day or so later by British reinforcements, they turned back and headed home, their job well and truly done.

Just two Irish-American soldiers were killed during the battle, compared with 28 Canadians who died on the field, as well as 22 who succumbed to injuries over the next few weeks.

The battle remains the last time Canada was officially invaded, and represents the first time the Canadian army - as it lives and breathes today - lost men during combat.

The Fenians had achieved their goal, they'd caught the attention of the British, and while it would take over half a century for independence to be fully achieved, the importance of the victory at Ridgeway - which has the distinction of being the only armed victory for the cause of Irish independence between 1798 and 1916 - undoubtedly laid the groundwork for the road to eventual freedom which lay ahead.

It may have happened half-way across the world, but it remains one of the most pivotal days in the history of Ireland.

The fascinating history of falconry in Ireland