Pic: This Day in Irish History

Michael Manning, a 25-year-old carter from Co. Limerick, became the 29th and very last person to be executed in the Republic of Ireland.

Manning was convicted for the sexual assault and murder of 65-year-old nurse Catherine Cooper.

Her body was discovered on November 18, 1953 in a quarry in Castleroy. Her autopsy showed that she  died while choking on grass which had been stuffed into her mouth by Manning to stop her from screaming.

Manning expressed remorse at the crime, which he didn't deny, but his recollection of the event tells a bizarre, haunting story.

He said he was making his way home on foot after a day's drinking at a pub called The Black Swan, when he saw a woman he didn't recognise, walking alone.

"I suddenly lost my head and jumped on the woman and remember no more until the lights of a car shone on me," he said.

After being spotted by a passing motorist, Manning ran, but foolishly left his distinctive hat on the ground at the scene of the crime, which ultimately allowed gardaí to track him down and arrest him the next morning. 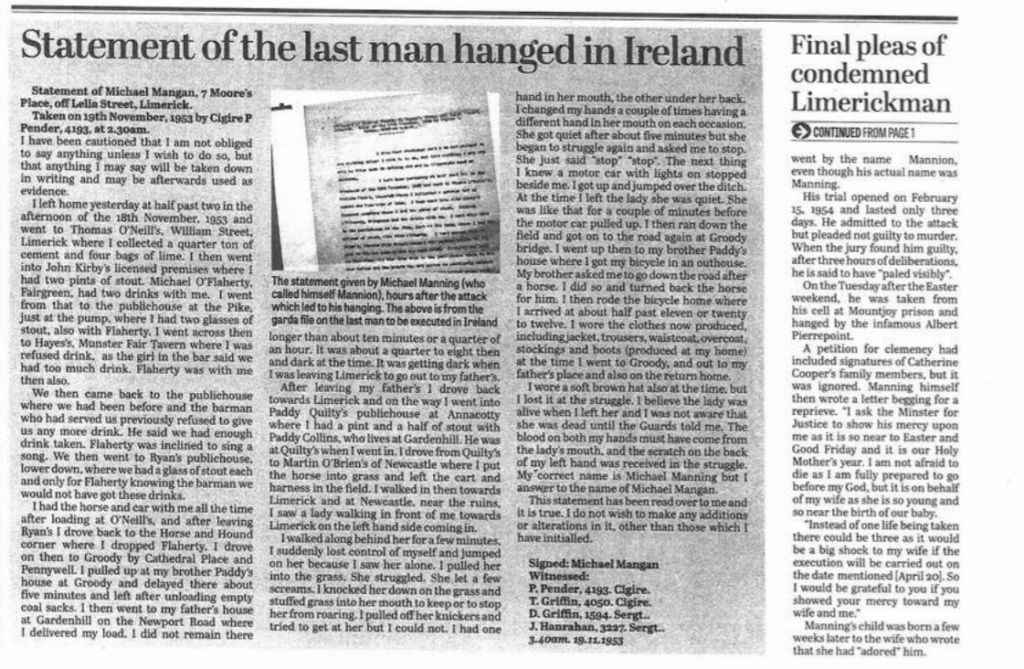 Pic: This Day in Irish History

The 25-year-old made an impassioned plea for clemency to Minister for Justice Gerald Boland, despite his request being supported by Nurse Cooper's family, it was denied.

Manning was executed by hanging at Mountjoy Prison in Dublin, where he was later buried in an unmarked grave.

The hangman was a Englishman named Albert Pierrepoint, who had travelled from Britain where he was one of three Senior Executioners.

In the aftermath of the execution Pierrepoint is reported to have said: "I love hanging Irish men. They always go quietly and without trouble. They’re Christian men and they believe they’re going to a better place."

Manning left behind a wife, who was pregnant with his child.

The death penalty was rare in Ireland, and it remarkably took another 47 years for it to be completely abolished.

Execution as a practice was phased out gradually. In 1964, it was abolished for all except for the murder of gardaí, diplomats and prison officers.

In 1990, the practice fell into disuse for these remaining offences, and was finally expunged from the Constitution of Ireland by a referendum in 2001.