THIS year marks the 150th anniversary of the laying of the first fully functioning communications cable on the floor of the Atlantic Ocean which eventually connected Britain and Ireland to the United States.

In times when we can send images and messages instantly with the touch of a button, it is easy to forget the challenges faced by the communication pioneers of the late 1800s and early 1900s in trying to establish the infrastructure which led to the technological advancements we enjoy today. 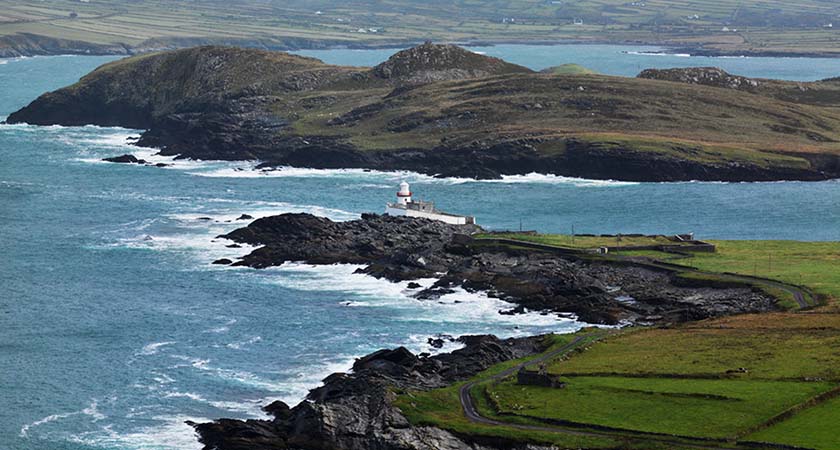 Here are twelve facts you should know about the Atlantic telegraph cable...

1.Valentia Island off the Kerry coast was the location of the first commercially viable transatlantic telegraph cable. The first attempt in 1857 to land a cable from Ballycarbery Strand on the mainland just east of Valentia Island ended in disappointment after the cable snapped. After subsequent failures of cables landed at Knightstown in 1858 and Foilhommerum Bay in 1865, the mammoth talk finally resulted in commercially viable transatlantic telegraph communications from Foilhommerum Bay to Heart's Content, Newfoundland in 1866.

2. Two thousand five hundred miles of cable was manufactured for the first voyage using seven copper wires twisted together and insulated with three layers of Gutta-Percha, a thermoplastic material made from tropical tree sap. For each mile of telegraph cable, a total of 133 miles of wire was needed and the total weight was approximately one ton per mile.

3. On a successful attempt, the steamship Agamemnon reached Valentia Island on August 5, 1866 and USS Niagara arrived in Newfoundland later the same day. The cable worked as expected and they successfully sent and received signals both ways.

4.The first complete message sent along the cable read, “Laws, Whitehouse received five minutes signal. Coil signals too weak to relay. Try drive slow and regular. I have put intermediate pulley. Reply by coils” . The event was marked by major celebrations in New York and London. 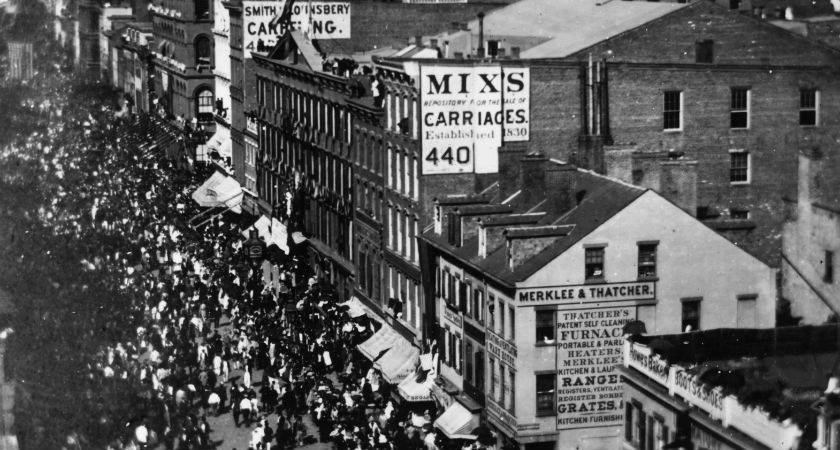 1st September 1858: A Jubilee procession up Broadway, New York on 1st September 1858, to celebrate the laying of 1016 miles of transatlantic telegraph cable between the US and Ireland by wealthy merchant Cyrus Field. The massive celebrations were premature however, as the cable was operational for only a month or so before rupturing. (Photo by William England/London Stereoscopic Company/Getty Images)

5. In August 1858, Queen Victoria and the President of the United States of America, James Buchanan, became the first heads of state to exchange greetings via the new transatlantic submarine cable before it broke again.

Sending the Queen’s message was begun on 16 August but not completed until the August 17 1858. It read…

The Queen desires to congratulate the President upon the successful completion of this great international work, in which the Queen has taken the greatest interest. The Queen is convinced the President will join with her in fervently hoping that the electric cable which now connects Great Britain with the United States will prove an additional link between the two nations, whose friendship is founded upon their common interest and reciprocal esteem. The Queen has much pleasure in thus directly communicating with the President, and in renewing to him her best wishes for the prosperity of the United States

On 19th august 1858, the President’s response was transmitted from Newfoundland. It read . . .

To Her Majesty, Victoria, Queen of Great Britain. The President cordially reciprocates the congratulations of Her Majesty, the Queen, on the success of this great international enterprise, accomplished by the science, skill, and indomitable energy of the two countries. It is a triumph more glorious, because far more useful to mankind, than ever won by conqueror on the field of battle. May the Atlantic Telegraph, under the blessing of Heaven, prove to be a bond of perpetual peace and friendship between the kindred nations, and an instrument designed by Divine Providence to diffuse religion, civilization, liberty, and law throughout the world. In this view will not all the nations of Christendom spontaneously unite in the declaration, that it shall be forever neutral, and that its communications shall be held sacred in passing to the place of their destination, even in the midst of hostilities? 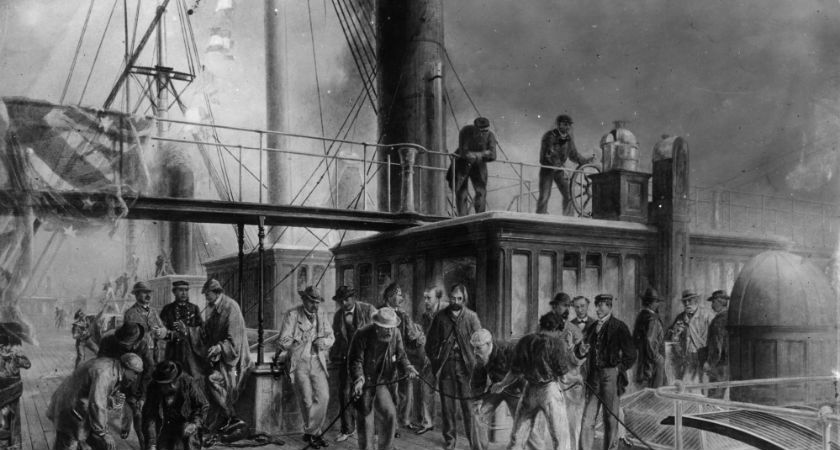 6. In 23 days of operation, a total of 271 messages totalling 14,168 letters were sent from Newfoundland to Valentia and 129 messages totaling 7,253 letters were sent from Valentia to Newfoundland. However, on the 18th September 1858 the cable fell silent. The failure of the cable in service was traced to a fault 300 miles west of Valentia. Repair was impossible. Quite why the cable failed remains open to debate.

7.The fifth attempt at laying the cable was the one that could finally be deemed a success and set in motion one of the greatest communications revolutions in history, transforming international political, social and economic relations forever.

8.On Wednesday, 13 July 1866, the Great Eastern, the world's largest ship, set sail from Foilhommerum Bay on Valentia Island off County Kerry on the south-west coast of Ireland to make the journey to Heart’s Content in Newfoundland. During the two week 4,000km journey it laid a cable that would become the first working communication connection between the two continents.

9. A farmer could live for two months on the cost of one word of a telegraph in 1866, with commercial operations the main benefactors of the service at the time. It would take another hundred years before the first phone call would take place between London and the United States.

11. A campaign to turn Valentia Island into a UNESCO World Heritage Site for its role in connecting Europe with North America via a transatlantic cable for 100 years is at an early stage with claims the Irish Government could soon be about to recommend it to be preserved by UNESCO.