Why Is January harder when you're Irish?

DON’T feel guilty about feeling down over the past 31 days.

Now that it’s nearly over we can get some perspective on why it’s not your fault. Don’t be in any doubt, if Christmas is the most wonderful time of the year then January is the bleakest.

In previous years I would blame myself for feeling down during this period but now I know it’s the combination of crap weather, overly ambitious resolutions, debt and being Irish.

If January was a disruptive child in class, it would be the kind of month that a male teacher would drag out the door in a headlock only to find later that January had vandalized his car.  There is no reasoning with January. It arrives on the day you have the worst hangover of your life and spends 31 days reminding you of all the stupid stuff you bought the previous month.

It goads you into making a 12 month commitment to an over-priced gym knowing that you struggle to remain faithful to a DVD box-set let alone a fitness regime.

Scientific studies have shown that 95% of people find the first month of the year to be what researchers call “a massive pain in the hole”.  The other 5% were too pissed off with themselves to take part in the study.

The depressive feelings that come with this month are beyond our control.

I believe the primary reason why we feel so bad in January is down to the consistently bad weather it brings.  Rain is guaranteed but not just any old rain. So much rain falls in Ireland in January that, just as the eskimos had to invent words for snow, we had to come up with thousands of new words to describe this precipitation accurately. Hence the terms, “It is pissing it down”, “Jayziz it’s milling out there” and “That’s very wet rain today.”

Non-Irish people don’t fully understand how significantly the weather effects and preoccupies us.  This is partially due to the unreliable nature of Irish weather.

As a result of this weather forecasters are placed on lofty pedestals like modern day fortune tellers or horse racing tipsters.  Their every wink and gesture scrutinized at the end of a news bulletin more than the news stories themselves. 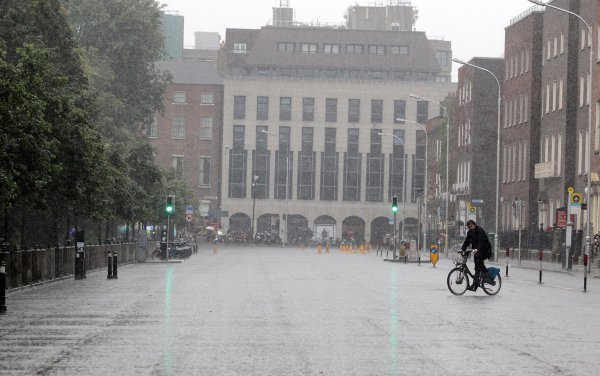 You don’t realise how obsessed the Irish are with the weather until you leave Ireland. My parents will regularly call for no other reason other than to tell me what the weather is like where they are. Many of the London people I now live with don’t watch the weather. They accept that winter will be cold and eventually it will get warm.

If it gets warm in Ireland we need to make use of it because it may not happen again for another three to four years. Only a native Irish person can fully understand the regret of not making use of good weather.  It is believed that the term, “I timed my holidays all wrong” emerged from this unique remorse.

After 33 years of dealing with the January blues I draw strength from the knowledge that this terrible hand of cards the weather has dealt us is a big source of my gloom.

The randomness of Irish weather prepares us for the topsy turvy nature of the world and life in general.  “It’s not cold enough to snow” but it’s unpredictable enough that it might. It’s windy enough to make it impossible to cycle but not windy enough to harvest enough energy to make the expense of a wind farm justifiable.

There are numbers you can call, there are friends to meet, there are things to do and places to go if you’re feeling down in January and there’s no shame in that.  Just as there is no shame in my owning a jacket for light rain, a jacket for heavy rain, a wind-sheeter, a proper winter coat, a puffy body warmer, a mack, a few different fleeces (one that smells for some reason), a jacket without a hood, a light jacket with a warm hood, a jacket that looks like it should be waterproof but isn’t, a leather jacket I got in a second-hand shop and a duffle coat just in case.