AN IRISH-AMERICAN woman's story of her childhood friendship with the owner of New York City's oldest Irish pub has garnered a huge reaction from people all over the world.

Globally popular Facebook page Humans Of New York, which began as a photography project in 2010 and quickly exploded into viral fame online after expanding into a way for people to tell their stories, has a following over over 17 million people.

The project's director, Brandon Stanton, has interviewed thousands of people on the streets of New York and beyond, eking out the incredible stories that everyday people hold inside, and sharing them with millions online.

The project has sparked a website, book, and multiple series capturing the images and stories of everyone from childhood cancer survivors to Syrian refugees and inmates of US prisons.

One of the page's latest tales has received an outpouring of love, after Brandon interviewed an Irish-American woman who told the story of her unexpected childhood friendship with Irish pub owner Matty Maher, of McSorley's Irish pub. 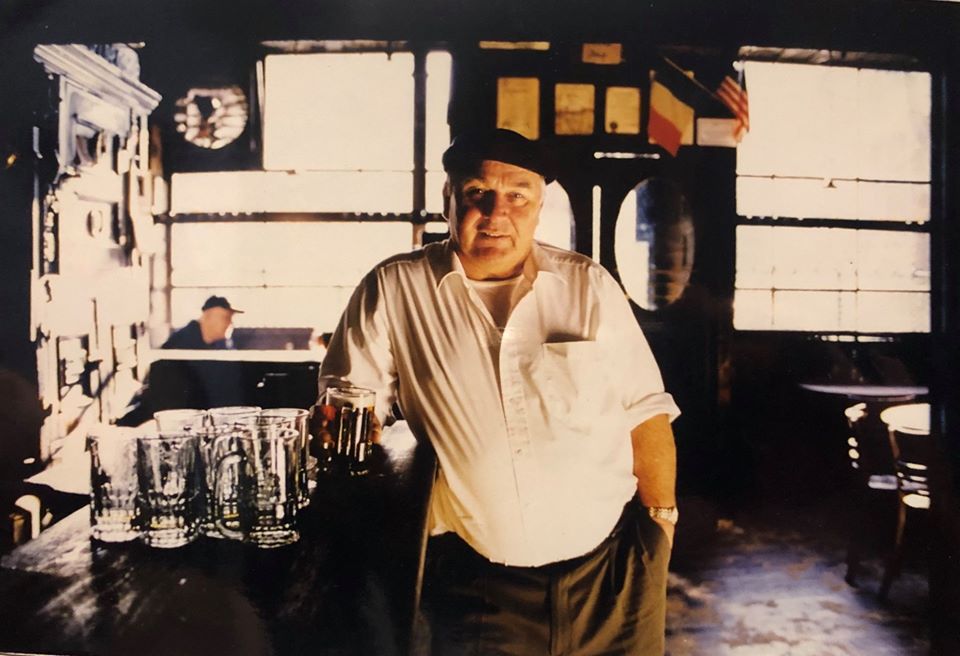 She told the photographer how,for her 6th birthday, her father told her she could do anything she wanted-- probably expecting she would ask to go for ice cream.

Instead, she asked to go to New York City, and incredibly, her father agreed.

While there, the father and daughter, who have roots in Ireland, visited McSorley's pub, the oldest Irish bar in New York, first established in 1877.

The pair visited during the day, when everything was calm and quiet, and while her father-- who designed bars for a living-- admired the unique architecture of McSorley's, the bar's owner introduced himself to six-year-old Kaitlin O'Brien.

Maher "loved" that Kaitlin's second name was O'Brien, calling her an "Irish princess", and the pair developed a firm friendship, with Matty Maher saying he hoped to see her at the pub on her 21st birthday. 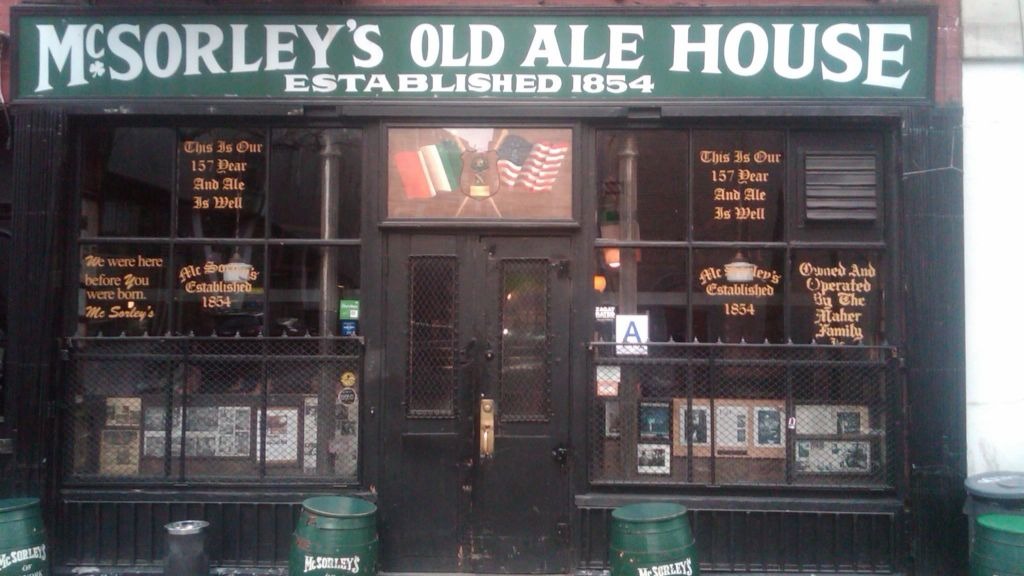 Their friendship remained strong over the years, with Kaitlin and her father writing back and forth with the bar owner and visiting McSorley's every time they were in New York, writing to him in advance to let him know they would be seeing him soon.

But when Kaitlyn became a teenager, the bouncers of McSorley's became less enthusiastic about letting her into the bar as she was underage, and years passed without a visit to New York's oldest Irish bar.

But, true to her word, when Kaitlin turned 21 she wrote to Matty Maher letting him know she would be keeping her promise and visiting McSorley's on her birthday.

"I sent Matty a postcard to let him know we were coming, but I wasn’t sure he’d remember me," she told Humans of New York.

Just like the very first time Kaitlin and her father visited McSorley's, it was early in the afternoon and the pub was empty. Matty was "nowhere to be seen" and the pair were just about to leave when, "just like a movie, the doors swung open and Matty came in like a ray of sunshine".

The bar owner had been waiting for Kaitlin, having never forgotten her promise or their friendship from over the years, and he still had the photograph of himself and Kaitlin on her very first visit at six years old framed in his office.

He presented her with cupcakes and a birthday card-- and inside he had written "I've finally met a woman who keeps her word."

Katilin O'Brien's story touched hearts across New York, America, Ireland and around the world, not least because thousands of people had visited McSorley's over the years and met the man himself, who was known to be a kind, funny and generous man.

The story has been liked almost 250,000 times and shared over 17,000 times, with the unique friendship resonating with people all over the world.

Sadly, in January 2020, Matty Maher passed away at the age of 80, leaving his friends, family and loyal customers devastated.

He had been battling lung cancer for some time.

Originally from Threecastles in County Kilkenny, the Irishman had owned McSorley's since 1977, and had taken ownership in the most American Dream-y way possible.

13 years before he bought the boozer, a 25-year-old Maher-- still living in Ireland at that point-- noticed a car broken down on the side of the road. Inside it was Harry Kirwan, the then-owner of McSorley’s, who was visiting Ireland.

After helping him, Kirwan told Maher that if he was ever in New York, there'd be a job waiting for him.

On a whim, Maher decided to take him on the offer, and set off for the American east-coast.

Over the next decade or so, Maher rose up the ranks at McSorley's, endearing himself to the local Irish and Americans pub-goers and revellers, before eventually purchasing the place altogether. 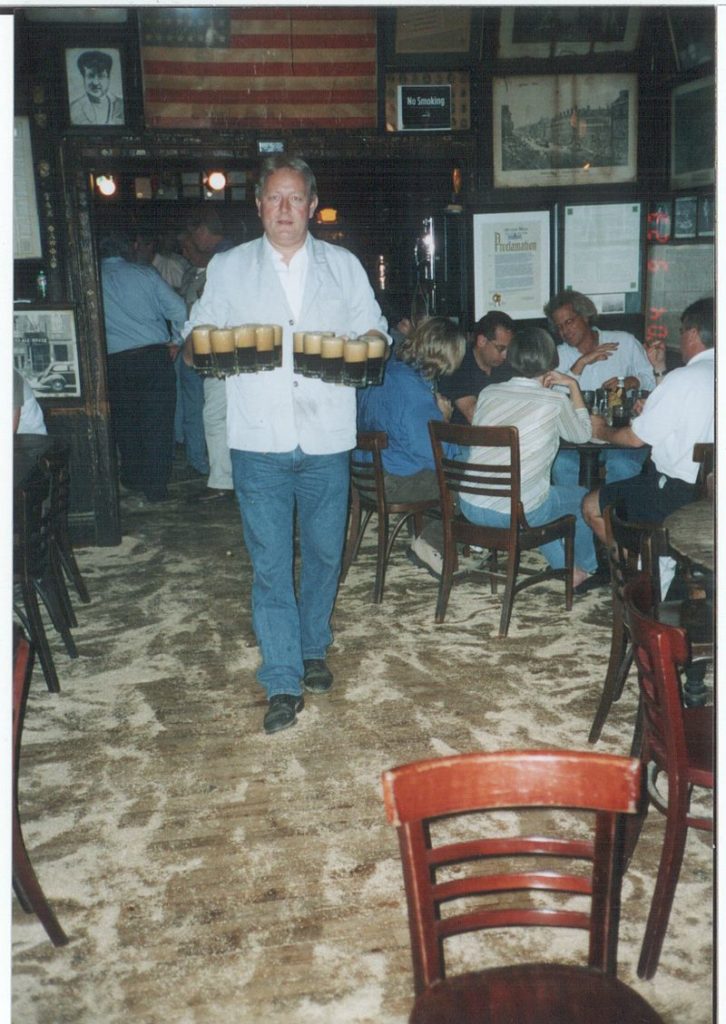 The pub was known for it's traditional Irish vibe, with sawdust on the floor and old artwork on the walls (McSorleys)

Following his death, McSorley's shared his incredible story in a tribute on the bar's official Facebook page.

"He died peacefully with family and friends by his side singing him Irish melodies. He was fond of saying, 'It's not what you become in life but what you overcome.' He was the light and joy to many.

"From a young man who farmed and delivered meat to make ends meet, Matty left Ireland in the early '60s and through hustle and grit became a world-renowned publican. 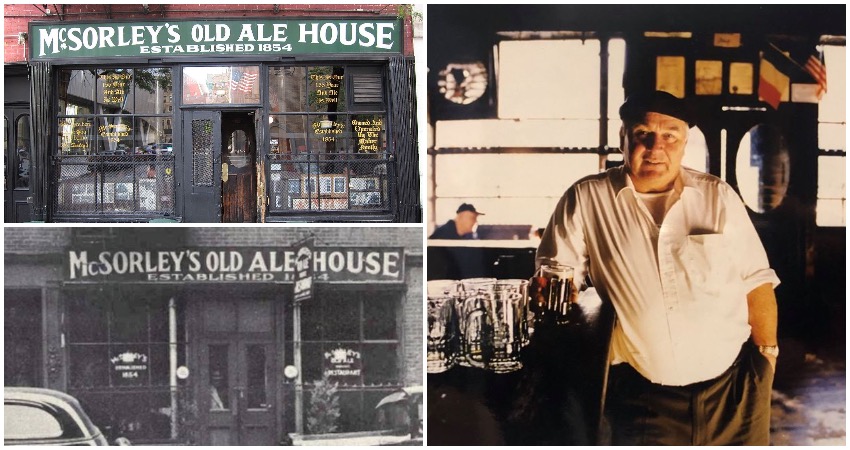 "And when Matty purchased the place in 1977, the city was near bankrupt and the neighborhood's future uncertain. Landlords were just walking away from their buildings, heroin was rampant, cars had to wait in lines that extended for blocks just to get gas, crime, and grime everywhere.

"But Matty left poverty back in Ireland and he was determined to leave it behind for good. He saw an opportunity and believed in the American Dream. And he loved history and all things Irish and knew McSorley's and the city could survive when so many others told him he was absolutely nuts.

"All of us who were lucky enough to have known the man will forever be eternally grateful for his generous spirit, and his compassionate understanding and forgiveness in man's folly."