Staycity has properties across Europe, including on The Strand in London

ONE OF London's newest additions to the hotel scene will have a distinctly Irish feel to it.

Launching this month on the city’s Strand, Wilde Aparthotels will be the first new premium brand from aparthotel operators Staycity.

The Dublin-based company was founded by Irishman Tom Walsh and his brother Ger who in 2004 started the business with a single apartment in Dublin’s Temple Bar - a former recording studio used by the likes of U2.

From these humble beginnings there are now thousands of Staycity apartment and aparthotels across Europe in cities such as Dublin, Edinburgh, Manchester, Liverpool, Birmingham, London (Heathrow and Greenwich), Paris, York, Marseille and Lyon.

"Wilde by Staycity has a clear personality and its distinctive style, comfort and clever design will appeal to today’s city traveller whilst retaining our trademark home-away-from-home hospitality," said Tom Walsh, Staycity Aparthotels’ CEO and co-founder.

"Our apartments offer guests a freedom that they don’t get from a hotel.

"Business and leisure travellers either on short or long-stays are discovering the more home-from-home feel of an aparthotel, where they are free to cook their own food when they want and have the space to relax, work or meet colleagues or friends," he added.

Developed by Galliard, the Wilde concept was created by Staycity’s in-house design team along with acclaimed architects Heneghan Peng - the London branch of design firm Perkins + Will. 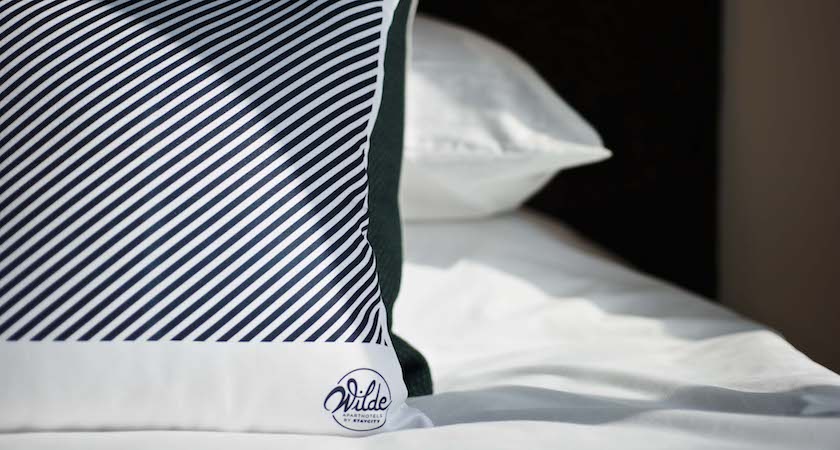 Irish writer Oscar Wilde was the inspiration for the new aparthotel

"The brand combines design cues from its locality coupled with an Irish stamp that alludes to its heritage," Mr Walsh added. "We intend Wilde to have a true sense of place, with designs continuing to evolve at each property."

Taking inspiration from the Oscar Wilde quote ‘There is only one thing in life worse than being talked about and that is not being talked about’, Staycity are aiming to avoid the latter being said of their rooms, which will feature local curiosities, bespoke artwork and handcrafted joinery.

Or if you favour the luxurious over the latest gadgets there are super-sized beds, rainfall showers and Irish-inspired crafted accessories and furnishings.

Following the opening of 182 apartments in Manchester Piccadilly in May, 2018 will see the opening of a 202 room property in Liverpool Corn Exchange.