IT was a tragedy which shook the very foundations of Ireland. On this day in 1968, the souls of 57 passengers and four cabin crew were lost after Aer Lingus flight 712 crashed off the coast of Co. Wexford.

The exact cause of the crash is still, to this day, unknown. Everything from mechanical faults to bird strike was considered as the culprit, and some even suggested that the aircraft could've been hit by a missile.

All that's known is that the pilot suddenly lost all control, the plane began spinning wildly, and smashed into the sea at break-neck speed near Tuskar rock at the tip of Ireland's south-eastern coastline.

The flight left Cork Airport at 10:32am bound for London, and proceeded normally until a call was heard from the cockpit which said: "Twelve thousand feet descending spinning rapidly".

There was no further communications with the aircraft afterwards.

Over the next few days, search parties recovered some of the bodies near the Wexford coast, but only managed to recover 14. The rest were lost in the impact and to the sea. 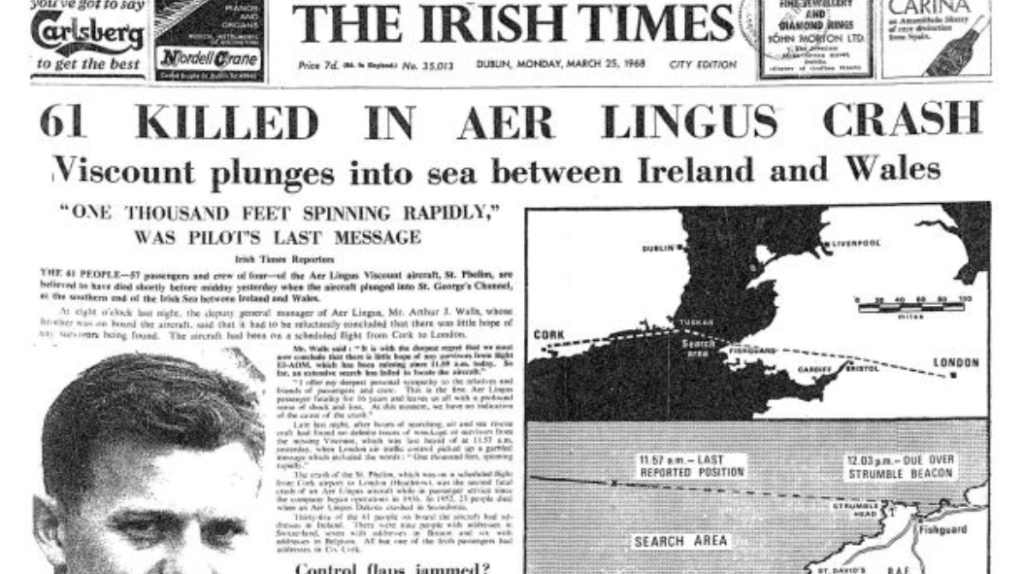 On board were 33 Irish men and women, five Brits, two Americans, as well as Belgian, Swedish and Swiss passengers, all of whom perished along with the cabin crew and pilots.

An investigation was launched to determine the cause of the crash, but nothing was ever officially confirmed.

Suggestions of missile strike and even a collision with a French military aircraft were thrown about, but nothing was ever proven.

The likeliest explanation is that there were serious mechanical faults with the aircraft that went undetected, an explanation backed up when a 2002 review into the tragedy discovered that Aer Lingus paperwork relating to a routine maintenance inspection carried out on the aircraft in December 1967 was found to be missing in 1968.

An official Government review took place soon after, which determined that the crash was likely the consequence of a chain of events starting with a failure to the left tail-plane caused by metal fatigue, corrosion, flutter or a bird strike, with the most likely cause being a flutter-induced fatigue failure of the elevator trim tab operating mechanism.

Whatever the cause, the tragedy and the mystery of this terrible incident will forever remain a stain on Irish aviation.