IN that memorable summer of 1966, I was in my favourite Fair Isle jumper and short trousers trying to read a shaking map and help my dad guide our faithful Morris Traveller through the winding country lanes of Ireland’s far west.

In the rear seat, my sister was enjoying the rolling landscape and bubbling streams far below, as my mum gripped her rosary beads and prayed fervently for our salvation.

This was a familiar journey we had made five times since my birth in Lincolnshire 10 years before.

Yet it always held the threat of doom from the moment dad fired up the engine, followed by those seasick nights on the rolling ‘cattle boat’ from Holyhead to Dun Laoghaire and, finally, to the roller coaster ride through remotest Co. Mayo.

Despite all that, my sister, Sadie, and me loved every aspect of the trips and were bursting with excitement at the thought of weeks in the high hills of my mum’s old home, near Ballinamore, Co. Leitrim, and my dad’s even more exotic birthplace on Ireland’s wind-and-ocean-blasted edge, near Belmullet. 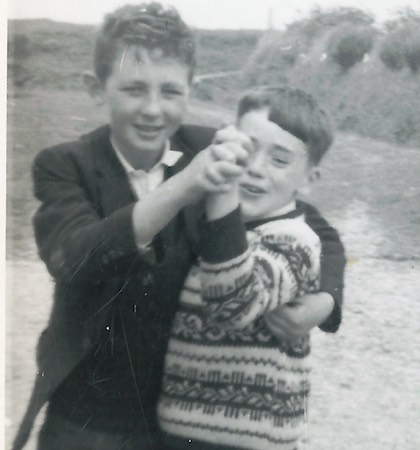 We waved goodbye to our English school friends in ‘66, soon forgot about Coronation Street on the rented black and white TV in the living room and I abandoned all hope of keeping in touch with England’s, eventually victorious, progress in the World Cup Finals.

Instead we immersed ourselves in the smells, sounds and colours of a country which, strangely, felt more like home than our real home: smoky turf fires surrounded by old women, smoking pipes, and spitting into the hissing embers; haymaking with Kevin the donkey and his cart; chasing the travelling grocery van for toffees; hunting for shellfish in the nearby rock-pools along the miles of empty Atlantic strand.

Then there was the humour, the myths, the storytelling: Sadie and me making tea for the old women and pouring in large doses of ‘mountain dew’ from the bottle under the sink (not one of them complained about the taste!); inserting itching powder into my cousin Mattie’s pyjamas as we slept four-to-a-bed; old Kate Gaughan, in her rainbow woollen coat, looking as tall and imposing as a Maasai warrior, whose ghostly tales sent us to our slumbers shivering with fright.

At the heart of it all, of course, was the craic, that indefinable Irish obsession with talking to the whole world continuously.

When journalism took me across the world, I never found another place where conversation and human connectivity was so seamlessly wired up.

Even as a small boy that summer, Sadie and me would be lifted onto a bar stool in McDonnels pub in Belmullet (conveniently sited with the family undertakers next door), sipping red lemonade and marvelling as voices crackled round the room.

It was that golden sprinkle of human magic that was captured by so well by Yeats: “There are no strangers here, just friends you haven’t met.”

Even so, for me, education and career militated against a return trip.

Mum and dad both passed away and my career in journalism propelled me like an Irish emigrant with travel in the genes to most parts of the globe, from the war zones of the Falklands, Bosnia and Sirerra Leone to the manic beauty of the likes of China, India and the Americas. 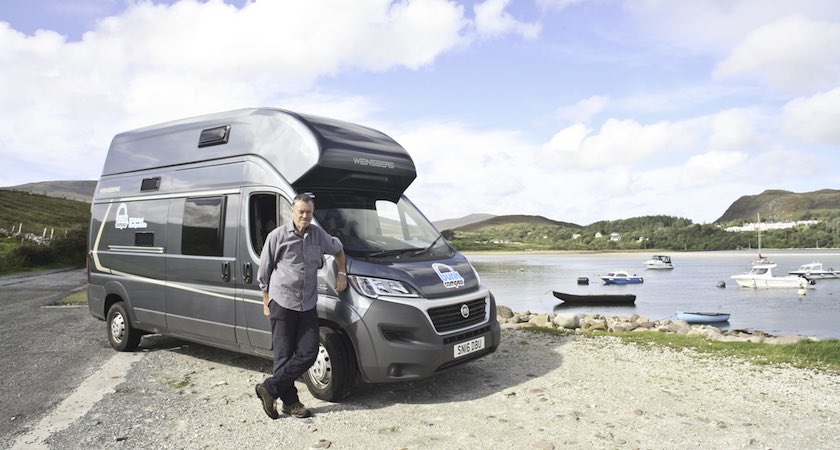 So, a couple of weeks ago, I had little idea of what would have become of my lovely bygone Ireland when I stepped off the Aer Lingus flight from East Midlands at gleaming Terminal 2 at Dublin International with my partner and photographer, Sue Mountjoy, on her first trip to the country.

Our introduction began with a whirlwind two-day stay in Dublin, which my dad had always bypassed completely in the Morris Traveller due to my limited map-reading skills and my mum’s habit of reaching for the rosary beads at the first sight of heavy traffic.

From our base at the Brooks Hotel, on central Drury Street, we were staggered at the sophistication and variety of food and tourism offerings available: Indian and Lebanese, as well as the ubiquitous Indian and Chinese of many styles.

I worried, though, that an evening trip round Temple Bar might have ended with two 60-year-old near-pensioners drowning under a raging tsunami of booze-soaked hen and stag parties.

No problem. We headed,instead, for a place described by Lonely Planet as ‘a bloody great pub’ - the 290-year-old Stag’s Head where you get chatter galore and glorious real Guinness. 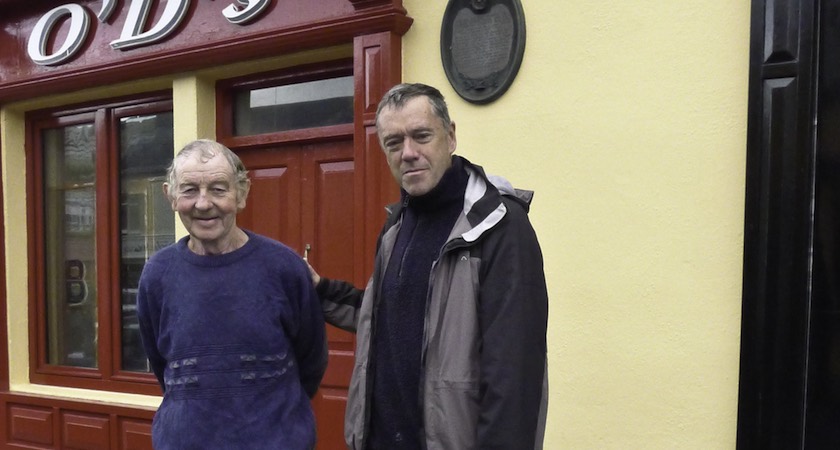 Together again - cousins JT, left, and James in Belmullet

Perversely, we then wandered up the road to eat that very British of staple meals, fish and chips, at 103-year-old Leo Burdock’s, occupying seats where the likes of Bruce Springsteen, Helen Mirren and Ray Charles have polished their Levis.

A full next day (after a mountainous Irish breakfast) saw us on the brilliant Hop-on Hop-off bus and doing the tourist rounds.

This had to include the Guinness Storehouse (nice pint, at least), the hugely visited Kilmainham Gaol where the 1916 Easter Rising leaders were executed and Arbour Hill Church where their remains are buried.

Dublin is a whirligig of speedy talkers and drivers, but to get to the heart of the ‘real’ Ireland we took a taxi out to Swords next day and picked up a fabulously fitted four-berth campervan at Bunk Campers, Ireland’s biggest hirer of the vehicles.

After the formalities (which included advice on how best to poach wild salmon in soaked newspaper on a wood fire, if we were lucky enough to get hold of one), we headed west toward Galway and the Wild Atlantic Way (WAW), the stunning 2,500 km drive from Kinsale in Co. Cork up to Co. Donegal’s Inishowen Peninsula.

“Wow,” I exclaimed immediately, when I hit the traffic-thronged M50, Dublin’s ring road, in the 2.3-litre diesel-powered German-built home on a set of Fiat Ducato wheels, “this is not a Morris Traveller and we are not on country lanes. I hereby name this truck Bert the Magnificent.”

Remarkably for a sizeable vehicle, Bert was easy to drive, particularly using the onboard GPS – which saved Sue from fretting in the map-reading seat. 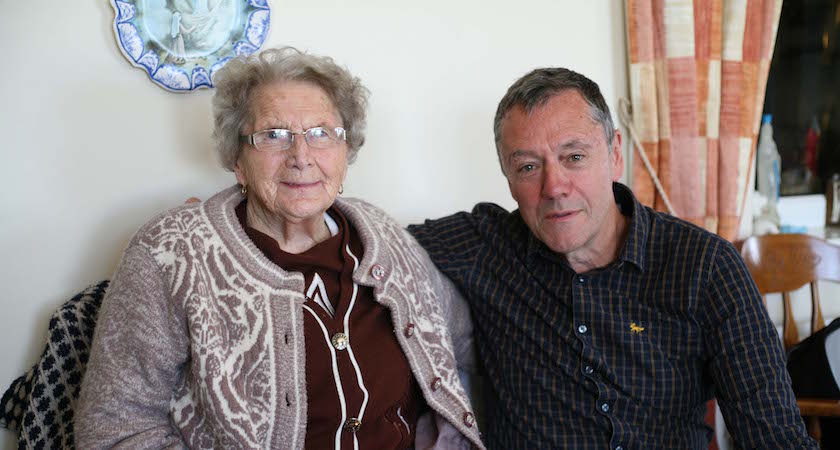 Over the next two weeks, we savoured the true core of Ireland and the WAW, from the often wild and empty loveliness of Galway, Connemara and Mayo to the softer, green and blue patchwork fields and lakes of Sligo and Leitrim.

We called in and stayed with relatives in Mayo: Aunt Kate, now 91 and a mother-of-10, who, with my cousin Annette, laid on a mighty welcome feast and hugged us as if they would never let go; just down the road, my cousin, JT, 65, a bachelor, who lives with his affectionate Collie Lassie in his parents’ original cottage was also full of fun and Irish hospitality. Not least were his bacon, cabbage and potatoes, cooked to perfection, plus Jameson nightcaps.

Half a century of change had brought flat screen TVs, electric cookers instead of turf for cooking, cars and tractors everywhere, affluence and conveniences like big new bungalows with tiled roofs and Centra supermarkets.

Everywhere was litter-free – we even saw one man outside Westport hose-piping the white rendering on his house – and pride in family homes was commonplace.

We left Mayo with a huge wrench, promising to return, and headed for the distant hills in the back country near Ballinamore, in County Leitrim, where my mum grew up.

Three brothers and a sister all left for New York and are now dead, but the original cottage and her 1900-built school, nearby, can still be seen surrounded by conifers. 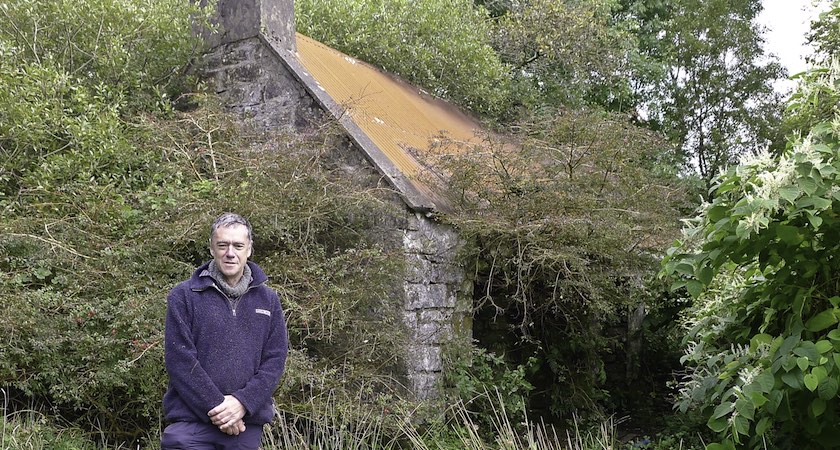 We met many people who knew the Dolans, including the former postman’s son, who used to sit on his dad’s seat delivering letters to the house where my Uncle John, a bachelor and the oldest brother, had remained and lived, even after my mum, the youngest, had run away to start a new life in England.

I remembered those days when John would put Sadie and me into the wicker creels on his donkey’s back and take us up the mountain to collect turf, passing ‘the fairy tree’ where both of us would hide our faces in case we saw the legendary lights which could blind passers-by.

A local farmer, Frank Canning, told us a tale I never knew: “Your grandfather was famous for walking a bullock to the fair day in town and tying him up at every pub where he had pints of Guiness.

“At the end of each day, the dealers would ask him to name his best price for the beast, but he would always reply: ‘I’ve eaten with him, I’ve slept with him and I’m taking him home with me’.

“It was clear to everyone round here that your grandfather had no intention of selling the animal – he was just his excuse to come into town for a few drinks.”

As I fired up Bert’s engine and we made for Dublin, I met up, ecstatically, there with another cousin, Marion, after so many years apart.

I wondered if such glorious meetings, such landscapes and such stories are the magical serum which brings Ireland to life for anyone who has the good fortune to journey there. As MacArthur said: “I shall return.”

Only next time, it won’t be half so long for me.

PS: We never did get the wild salmon (which Sue was desperate to taste), but I did gulp down some of the famous Irish red lemonade... 50 years late.

Useful information for planning a trip to Ireland...

If you want further information on The Wild Atlantic Way, there is plenty online and an app to download here.

If you are thinking of a campervan tour in Ireland, as well as in Britain and further afield, Bunk Campers have a huge fleet of well-equipped vehicles to suit all pockets needs. They can be booked in London, Glasgow and Edinburgh and taken by ferry or picked up in Dublin and Belfast.

For planning a journey across Ireland, check out approved sites at www.campingireland.ie. You can also camp free at many places, including supermarket car parks, by asking politely first.

For stacks of ideas on visiting in and around the Irish capital click here. Dublin.com also includes the great Hop on- Hop off bus details.