WHEN my dad dropped me off at Shannon Airport on the day I moved to England, he bent down to tie a red ribbon around my suitcase handle, so I knew which one would be mine at Gatwick.

When he finished, he hugged me very close.

Technically, I was only going away for 6 weeks. That's what I had told people. A 6 week internship at a film website that had agreed to take me on for expenses only, but most Irish people are versed enough in the language of emigration to know when you're serious.

My dad knew I wasn't coming home, and I knew it, too.

When you eventually feel it, it will hurt. It will hurt like a physical pain. It will go.

My dad had emigrated to London at exactly my age - twenty-one - and I had been hearing stories about it since I was old enough to process them. The night he fell asleep standing up in a phone box, the weeks he spent as a prop-puller on the West End, the year he spent sleeping in his landlady's curtains.

Homesickness was not a featured topic in these stories, and it was only in this moment - as a word of warning - was I hearing about it all. Four years on, and I'm sitting in a cinema, watching Saoirse Ronan receive the same advice. "Homesickness is like most sickness," says Father Flood, played by Jim Broadbent. "Eventually it moves on to someone else."

Brooklyn follows Eilis, an Irish girl in 1950's Wexford who reluctantly emigrates to Brooklyn. She's coaxed on by her sister, Rose, and the aforementioned Father Flood, who has secured her a job in a department store and a room in Mrs Kehoe's (Julie Walters, in a completely flawless performance) boarding house.

We follow her as she traipses around the streets of Brooklyn. She talks and eats and sleeps and works, but all of these movements are just stones skimming along the surface of her. 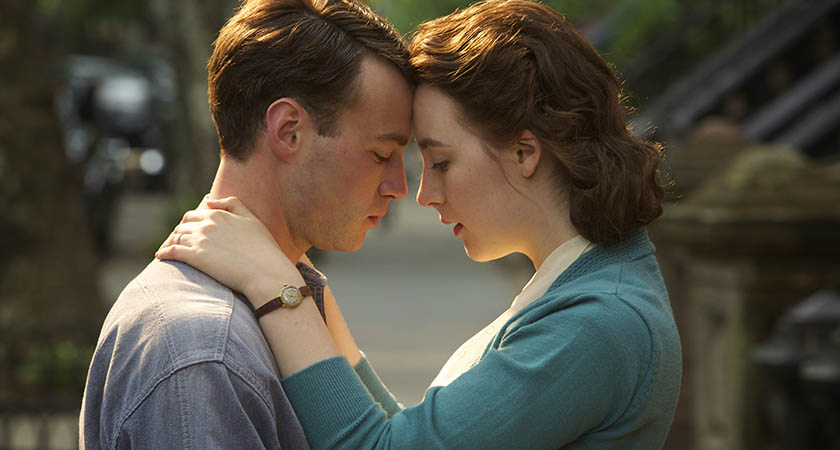 She barely registers other people, mumbles through incomprehensible chat about the weather, and balks when a waiter compliments her accent. And then she goes home, and cries on her single bed.

I have cried in the cinema before. Hell, I have cried at BT ads before. But I have never wept so heavily, so self-indulgently or so helplessly the way I did at Brooklyn.

The fictional Eilis and I are born sixty years apart, and yet our narratives are almost identical. We have both cried alone on our single beds. We have both counted out exact change for all of our purchases, terrified someone will corner us on a currency we are still struggling to recognise.

While we have both been told that "loads of Irish people are over there" and that it's "just like home", we have still looked gloomily up at unfamiliar buildings, and wondered if we died, how long it would take for our families to find out.

After I get home, I can't sleep. I tweet enthusiastically about how it was the first time I had felt a film was "about me". The brilliant film journalist Helen O'Hara replies quickly: "It's also about me. What a coincidence!"

Brooklyn is wonderfully funny in places, and the love story at its centre flowers at a gorgeously giddy pace. Eilis eventually meets Tony, and Italian-American who rapidly fills up her lonely life with colour and spark. The sickness moves on. It did for me, too: the pain dulled, I met people, and crying jags grew fewer and further apart.

Like Eilis, I had a mother that liked to remind me that I could come home anytime I wanted, and felt quietly hurt when I no longer wanted to.

We all experience it in the same way, whether we're Irish or not, whether we're women or men, whether we came over for our dream job or to escape the place where we're from. Maybe that's what makes it so universal: and why a story about a girl in 1950's Ireland feels relevant now more than ever.