A COMMUNITY in north Mayo is in 'shock' after the tragic death of three brothers and two of their wives in a helicopter crash in Wales.

Local Fine Gael Councillor Jarlath Munnelly spoke to The Irish Post about how the small community is in shock following the deaths of Kevin and his wife Ruth,  Donald and his wife Sharon and the third Burke brother Barry.

The five Irish family members were travelling from their home in Milton Keynes to Weston Airport on Wednesday, March 29, to attend a family function in Ireland.

However, when it failed to arrive in Dublin, a search operation was launched at 4.15pm over the Irish Sea by British Coastguard helicopters based at Caernarfon Bay and St Athan.

But due to low lying cloud, and extremely poor visibility, the helicopters returned to their bases.

North Wales Police and the Mountain Rescue Teams took over the search on Thursday morning on the ground in the Snowdonia area of Wales, where they discovered the crashed helicopter in the Rhinog Mountains. 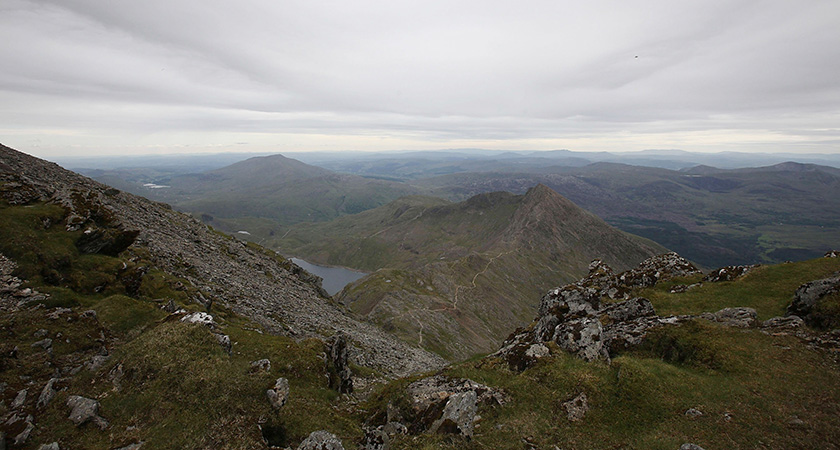 The recovery operation for the Burkes' helicopter has been hampered by the weather as the crash site is in a remote and treacherous site only accessible by foot. (Picture: Christopher Furlong/Getty Images)

Due to weather conditions and the site being located in an area only accessible by a two hour hike, the bodies of the family members were recovered on Friday, March 31.

"The feeling locally is one of shock and loss," Councillor Munnelly told The Irish Post.

"The Burke's family came from Kilcummin and they were very proud of their roots," he said, "They had extended family in the area and were regular visitors to the place.

"There's a sense that Kilcummin has lost its own sons in this terrible tragedy."

Kevin, Donald and Barry were the three sons of Irishman Donal Burke who moved from Mayo to Britain some years ago, and Noeleen, who is originally from Dublin.

Kevin and Ruth had one daughter and one son, Donald and Sharon had three children and Barry had one child.

A spokesman for the family said six children had lost their parents in this accident.

“Six children have lost their parents in this tragedy.

“At this stage the family wants to be left alone to be able to deal with their grief over this terrible loss and concentrate upon looking after the children.”

Tributes for the victims have poured in as news of their death broke yesterday.

A friend of the Burkes, Damian Wilson said he hoped it was a “bad dream.”

“Ruth Burke and Kevin Burke, rest in peace my friends. I just hope I wake up tomorrow and it was a bad dream,” he said.

"You taught me a lot in business, especially in my earlier days.

"Thank you for everything, you will be missed by so many people, especially your family.

"Take care up there."

In a picture post on Instagram, model Danielle Lloyd said: “Such sad news about Ruth and Kevin Burke.

“They were two of the nicest people I’ve ever had the privilege to meet and my thoughts and prayers are with all the family.” 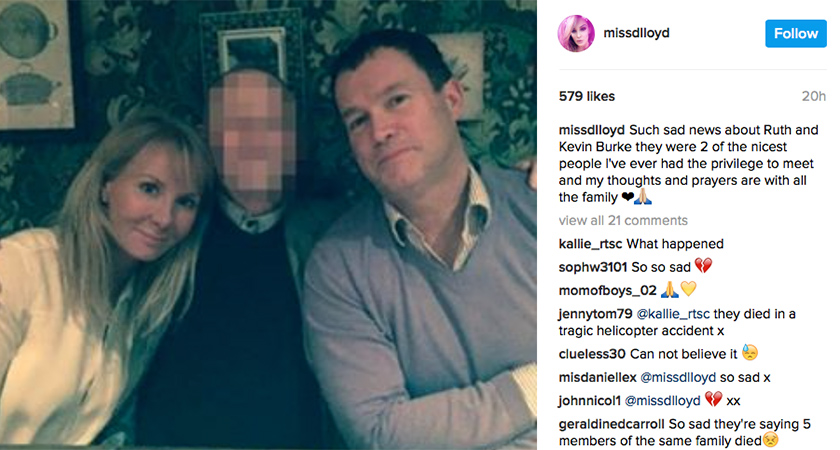 Bedfordshire Councillors Sue Clark and Ken Matthews said: “We were deeply shocked and saddened to hear the news of the untimely deaths of Ruth and Kevin Burke, who lived in our local area.

“Kevin was not only our constituent but also a colleague, having previously been a Parish Councillor who was clearly very committed to his community.

“At this tragic time our thoughts are with their family and friends, to whom we send our sincere condolences.”

An investigation by the Air Accident Investigation Branch is underway and investigators are at the scene to assist forensic recovery of the aircraft.

North Wales Police are appealing to anyone who was in the Rhinog Mountains area of Snowdonia between 12 noon and 1pm on Wednesday 29th March and may have heard or seen the helicopter to contact them via the live web chat or by phoning 101.