The Prince of Wales, known as the Duke of Rothesay in Scotland, with the President of Ireland Michael D Higgins in the Yellow Room at Dumfries House in East Ayrshire.

PRESIDENT of Ireland Michael D. Higgins and HRH Prince Charles have become joint patrons of the University of Liverpool Institute of Irish Studies.

In a statement, University of Liverpool Vice-Chancellor, Professor Janet Beer said: “I am enormously proud and delighted that the University of Liverpool’s Institute of Irish Studies has been recognised for its valuable work by His Royal Highness, The Prince of Wales and the President of Ireland, HE Michael D. Higgins.

“There is much that connects our islands and the Institute of Irish Studies plays a huge role in shaping that relationship, through its research, events, student programmes and expertise.

“We look forward to further strengthening our links with the support and patronage of The Prince of Wales and President Higgins.” 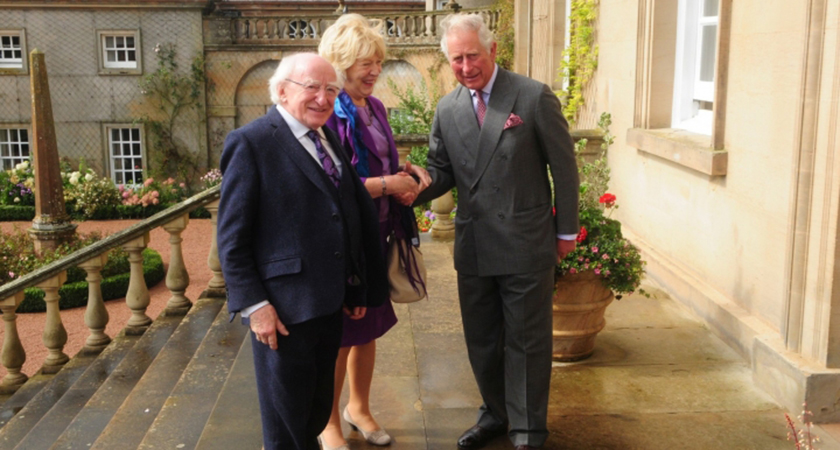 The Director of the Institute of Irish Studies Professor Peter Shirlow said: “The joint Patronage of The Prince of Wales and The President of Ireland, HE Michael D. Higgins shows that The Institute is a site of scholarship, conflict transformation and community outreach having done much to build better relationships between these islands that will help us live together less as intimate strangers and more as friends.

“His Royal Highness, The Prince of Wales and The President of Ireland, HE Michael D. Higgins have each promoted a vision of constructive relationships between these islands that preserves our unique character and which embodies the richness of our interdependence.

“The joint patronage reminds us that there is strength in unity, 'ní neart go cur le chéile.'”

The foundations of the Institute began in the 1985 Anglo-Irish Agreement, to encourage greater understanding and mutually enriching contact between the two islands. The Institute of Irish Studies was consequently established in 1988, and has internationally-recognised excellence in teaching, research and outreach beyond academia was recognised in 2007 by the Irish Government through the creation of an endowed chair in Irish Studies.

The announcement of the joint patronage comes after the Irish Head of State joined Prince Charles at the 10th anniversary celebrations of Dumfries House in Scotland yesterday, September 6.

The President and his wife Sabina joined Prince Charles and Camilla to mark the anniversary of the opening up of the house to the public and heard of the significance of the upskilling of the talents of local young people from under-privileged settings as part of the Prince’s Trust project.

Having previously been privately owned, Dumfries House and the surrounding estate are now managed by a Trust and receive 24,000 visitors a year, employ some 150 people and provide a series of amenities to the local community, including skills training and educational programmes, woodland walkways, a playground and an outdoor swimming pool.