51 Irish senior citizens given keys to new homes this morning

FIFTY-ONE senior citizens have received the keys to their new homes this morning after years on the Dublin City Council waiting list.

Cluid housing, a not-for-profit organisation based in Dublin, officially granted 43 one and two bedroom apartments in Cabra, Dublin 7, with a total cost of just over €8 million.

The modern and well-equipped homes have been named Broome Lodge, and have been designed to promote independent living and cost an average of just under €190,000.

At the heart of Broome Lodge is a landscaped central courtyard designed to encourage regular social interaction.

The entire complex runs on an energy efficient heating system and the BER of each apartment is A3.

"We are determined to keep pace with residents’ changing needs by developing schemes like Broome Lodge.”

"We believe in supporting senior citizens to ‘age in place’ which means enabling people to stay in their home for as long as they wish. That is why Clúid’s design standard follows the Universal Design principle in its approach to delivering sustainable housing."

The Universal Design principle allows for greater independence for residents, allows residents to remain in their own home for longer, eliminates the need for retrofitting, eliminates adaptation costs, reduction in the capital cost of disability grants, and less need for support services. 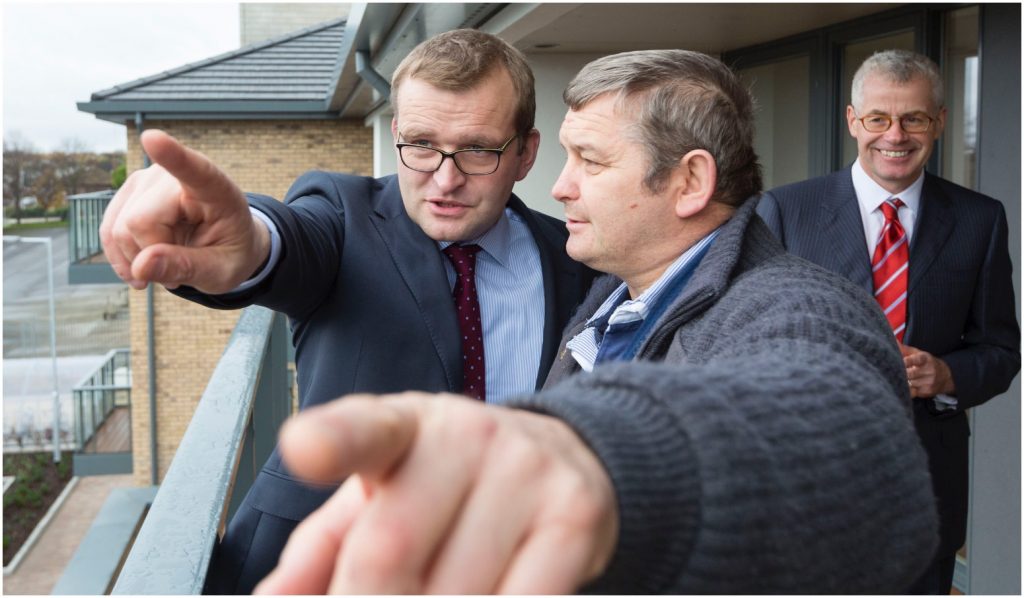 One of the senior citizens being shown around his new Dublin home. (Picture: James Harold Clúid Housing)

Local TD, Minister Paschal Donohoe highlighted just how important this scheme is to the area.

"The investment by Government, in partnership with Clúid Housing, demonstrates our commitment to the people of Cabra and to the provision of better housing, new schools, and improved infrastructure ensuring better standards and quality of life," he said.

"Today’s proceedings at Broome Lodge act as an important milestone for Cabra West and mark the official opening of homes for 51 senior citizens in our community.

"The redevelopment of this site is not only important because it provides homes for people who need them, it also transforms an area, which has been the source of dereliction and vandalism in the past, into one that is focused on building a sense of community and facilitating people with homes for life."