28th June 1963: President John F Kennedy of the USA is almost lost among a crowd of well-wishers during his visit to Cork in Ireland. (Photo by Keystone/Getty Images)

THE historic moment when US President John F. Kennedy touched down on Irish soil was recorded on film by British Pathé.

Kennedy was the first American president to visit Ireland during his term in office.

Patrick Kennedy "scraped together" enough money to get the boat to America to start a new life, unaware that his great-grandson would one day become one of the most powerful and popular figures in world history.

JFK's 1963 trip was seen as a pivotal moment in Irish history.

Scroll down to see the footage... 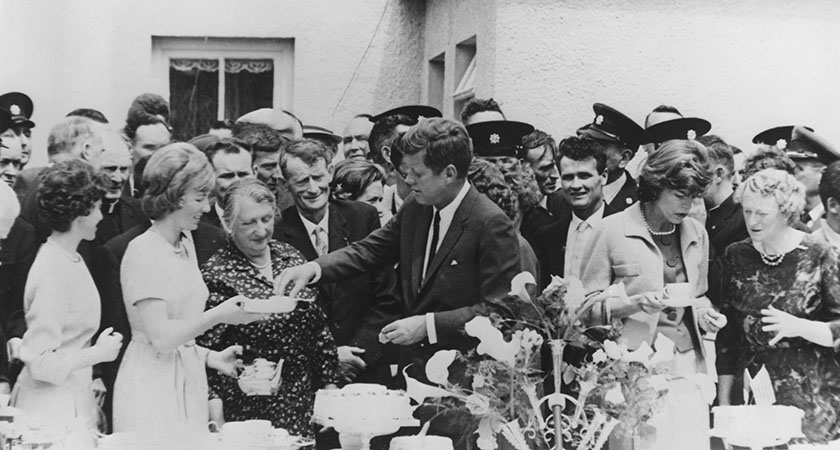 US President John F. Kennedy attends a tea party in his ancestral town of Dunganstown, County Wexford. On the far right is his third cousin Mary Kennedy Ryan. (Photo by Keystone/Hulton Archive/Getty Images)

Thousands converged on Dublin's O'Connell Street to greet him and his motorcade was cheered on by an estimated quarter of a million people.

In Cork, he was mobbed by well-wishers.

Later, the President travelled to his great-grandfather's birthplace in Dunganstown to have tea with his Irish cousins.

JFK concluded his 4-day visit in Dublin, later calling it "the best four days of my life."

He was assassinated a few months later on November 22, 1963.

Watch the footage below: