Today, the National Army Museum publish a number of photographs, papers and accounts relating to one Dublin-born World War One soldier who led an extraordinary life.

Captain Newton Williams was born in Rathdown, Dublin in 1890. He started work in 1910 as an accountant with the Imperial Bank of Persia in the City of London.

Later during his time as a WW1 Captain, he was called upon to help quell a siege in Persia – where he experienced mutiny and rebellion in the British campaign to take control of the area that is now modern day Iran.

The newly-published documents shed light on how Persians, who were recruited to fight with Britain mutinied and refused to fight their fellow countrymen. Persian troops also mutinied against British officers and fought alongside rebellious tribes.

The documents reveal how Britain eventually won control over southern Persia through bribes rather than battle.

Featured on the Museum’s First World War in Focus portal, the documents are the latest addition to the Soldiers’ Stories series, telling stories of the War from those who fought in it.

Dr. Peter Johnston, Collections Content Team Leader at the National Army Museum says the documents are “vital for us to remember past conflicts in an area which is still unstable 100 years on. The story gives an insight into how sometimes alternative tactics, such as payment, are used to win wars, rather than battle.”

During the war, Persia was a key territory to the British who needed oil. Knowing this, Germany and Turkey sent agents to stir up nationalism and rebellion among the Persian population.

By June 1916 this had become such a problem that the British transferred Captain Newton Williams, with his knowledge of Persia, to move from his role as an intelligence officer Mesopotamia to help.

Scroll down to see more photographs and documents... 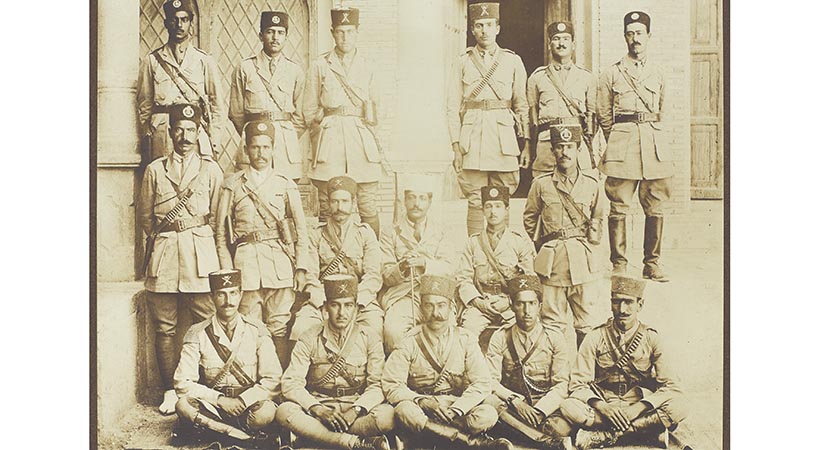 He helped form an army of Persian, Arab and Baluchi men as well as bring in Indian sepoys (soldiers) to make up a force titled the South Persia Rifles, however once the Persian troops realised they were fighting their own people some rebelled and refused to fight.

Over the next two years the campaign turned into a long and drawn out struggle for power.

This situation came to a head in August 1918 at the Siege of Abadeh.  Hundreds of the Rifles troops mutinied and joined dissenting Persian tribes putting the entire campaign at risk.  Making use of his Indian troops and by bribing some of the rebellious tribal leaders, Williams was able to resolve the siege – with many mutineers caught and executed.

The Rifles continued in existence until July 1921 when they were disbanded by a new Persian government, determined to assert its independence.

His name was also mentioned in the London Gazette newspaper for his ‘distinguished service in the field’. He retired with the rank of captain and lived in London until he died in May 1945 at age 55.

1. Newton Middleton Williams (1890-1945) was born at Rathdown, Dublin, on 13 February 1890. After completing his education, he started work in 1910 as an accountant with the Imperial Bank of Persia in the City of London.

2. In January 1916 he served as a staff officer at the Expeditionary Force’s headquarters in Basra, and then as an intelligence officer on the nearby Karun front. In May 1916 his knowledge of Persia and its people resulted in a transfer to the South Persia Rifles.

3. After war, he returned to England and in May 1919 and married Eleanor Purdon Payne where they lived in London.

4. His company was a transport contractor of the Anglo-Persian Oil Company so he spent a lot of time in Persia. He also wrote several press articles on the sea and land journey through the Persian Gulf across Iran to the Caspian Sea.

For more visit First World War in Focus at www.nam.ac.uk/ww1