IRISH Ambassador to Britain Adrian O’Neill has shared a Christmas message for the Irish community across Britain with The Irish Post.

In it, he reflects on an eventful year for the Ambassador and his wife Aisling, as well as the team at the Irish Embassy in London, which included a visit by President Higgins to Birmingham and Liverpool, the signing of a Memorandum of Understanding between the British and Irish Governments and the commitment of £5.5 million in funding to over 105 Irish organisations in Britain through the Emigrant Support Programme.

He also reveals that in 2020, for the very first time, Irish citizens - including children - applying for their first passport can now do so online. 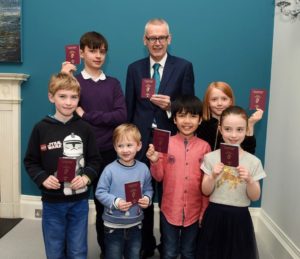 Read the Ambassador's Christmas message in full below:

"On behalf of myself and my wife Aisling, and all our colleagues in the Embassy, I want to wish Irish Post readers a very happy Christmas and every good wish for the year ahead.

2019 has been an event-filled year and readers will no doubt have their own views on its most significant moments.

We were delighted to welcome President Higgins and Sabina Higgins to Birmingham and Liverpool in mid-February and to host TRH the Prince of Wales and the Duchess of Cornwall, as well as Tánaiste Simon Coveney, at the Embassy for a St. Patrick’s Dinner in March.

May saw the signing of a Memorandum of Understanding between the British and Irish Governments, reaffirming both countries commitment to the Common Travel Area which gives Irish and British citizens the right to live, work and travel freely in each other’s countries – even after the UK leaves the EU.

From our Bloomsday celebration in June, to a reception to mark Ireland’s cricket Test Match debut against England in July, through to the Taoiseach’s meeting with PM Boris Johnson in the Wirral in October, the second half of 2019 proved as memorable as the first.

And in a year filled with events, what stands out for me and my team in the Embassy, is the engagements with members of the Irish community throughout the year.

Celebrating St. Patrick’s Day with Irish communities and organisations across the U.K is always a highlight of our calendar. It is both a privilege and a pleasure to witness the vibrancy of the community and to see up close the wonderful work done by so many, including so many volunteers, which sustains Irish community organisations.

This is work that the Irish Government is proud to support through the Emigrant Support Programme and further funding of £5.5 million to over 105 Irish organisations in Britain was announced by Minister Ciarán Cannon in the Embassy in late October.

Finally, I am delighted to bring some good news on passports to our citizens in Britain this Christmas.

Irish citizens, including children, applying for their first passport can now do so online, saving time and money.

This is a further expansion of the very successful online renewal scheme which was extended to include children earlier this year.

More information on how to apply and what documents are needed is available here.