A STAMP collection commemorating the centenary of the Irish volunteers was issued yesterday by An Post.

This follows their earlier release of a new series of stamps celebrating the diversity of present day Ireland.

The 60c stamp was designed by Dublin-based firm Zinc Design Consultants and features a group of uniformed Irish Volunteers from Waterford.

The Irish Volunteer Force, or Óglaigh na hÉireann, was originally formed in 1913 to defend the application of the Home Rule Bill to the whole of Ireland.

It divided into two a year later with the outbreak of World War 1; the majority formed the National Volunteers who favoured enlisting to fight in the war in the hope of being rewarded with Home Rule, and the remaining Irish Volunteers, led by Eoin MacNeill, stayed in Ireland.

The Irish Volunteers were forced underground after their active part in the 1916 Rising. In the War of Independence which began in 1919, they became known as the Irish Republican Army. 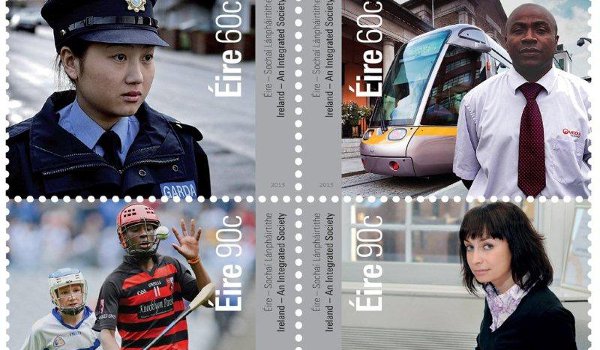 In contrast to the black and white image on the stamp that marks 100 years of the Irish Volunteers, four new faces star in the collection that celebrates Ireland’s integrated society.

These faces are (clockwise, top left) Garda Dongdong Zheng from China, also a member of An Garda Síochána stationed in Swords, Nigerian native Sammy Akorede, a Luas Revenue Protection Officer, Anna Garciaz who is Polish and works in Marketing with Permanent TSB and hurling player Christian Tshibangu, a student at St. Colmcille’s SNS in Knocklyon.

The stamps were designed by Atelier David Smith.

An Post referenced the 2011 Census on the release of these new stamps, which indicated that there are almost 600,000 non-Irish nationals living in the country. Since this time, over 30,000 of these new Irish have been awarded Irish citizenship.

It also added that the influx of migrants has helped shape a more socially and culturally diverse society and along the way transformed Ireland into a more inclusive multicultural nation.

Both celebratory stamps can be purchased and viewed at Ireland’s main post offices or on www.irishstamps.ie.