POLICE in the West Midlands have appealed on behalf of a heartbroken mother after an urn containing her baby's ashes were stolen during a recent break-in.

Her ashes were contained in a silver-and-gold-painted urn that was stolen when her house on Clopton Road, Birmingham, was burgled on Friday, February 4.

Appealing directly to the thieves, Ms Farrell Breen has asked for the urn to be left somewhere it can be found and retrieved, as Phoenix "is ours and her urn is the grieving process".

"The urn is not of value except for what it means to me," added Ms Farrell Breen.

DC Rebecca Woodcock has also appealed for whoever took the urn to "do the right thing".

"We understand that the urn was in a box and that the thieves probably just saw the silver-and-gold-painted details, and took it without looking carefully to see what it was, as they didn't want to spend too much time in the property," said DC Woodcock.

"Catherine has been very upset and feels responsible for the loss of her daughter's ashes and my main concern is to get her baby Phoenix returned to her, where she belongs. 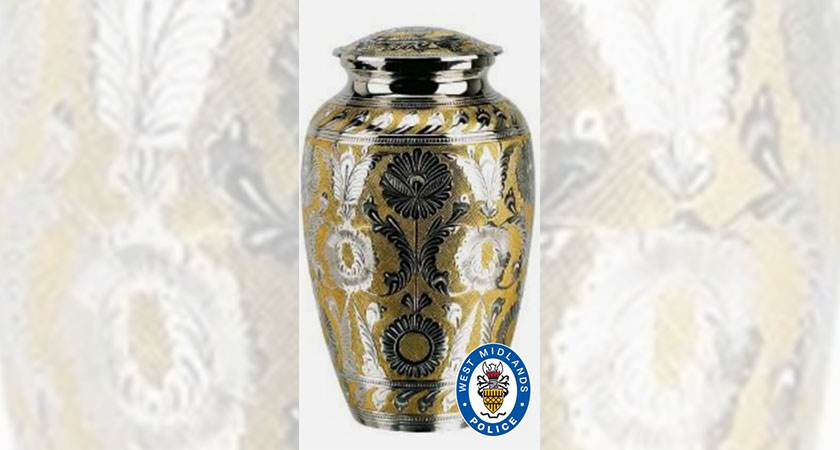 The urn is painted with silver and gold detail (Image: West Midlands Police)

"I'd appeal directly to the better nature of the people who took the urn to do the right thing.

"Take the urn to a safe location, or give it to someone who is able to safely return Phoenix's ashes to Catherine and her family.

"They could even give an anonymous tip to Crimestoppers if that’s what it takes."

Police believe there is also a possibility that the burglars may have discarded the urn somewhere and have urged people in the area to keep a look out.

Catherine lives at the house in England's West Midlands with her two children, aged seven and eight.

Their Christmas present, a Nintendo Switch, was also stolen by the thieves.

Locals clubbed together to buy them a new one, but they remain heartbroken and just want their sister back.

The family light a candle for Phoenix every night and still celebrate her birthday each year with a cake and a balloon release.

Anyone with information can contact West Midlands Police via Live Chat on their website, quoting crime reference 20/193726/22.