BINGE DRINKING is a “sexual signal” used by men to show women their strength, vigour and, ultimately, their attractiveness to the opposite sex.

That’s according to a new scientific study which suggests heavy boozing among young adults may serve to demonstrate “the signaller’s willingness to take risks”.

Research published in the journal Evolutionary Psychology draws on key evolutionary theory to propose excessive alcohol consumption is something called a “costly signal” - a type of behaviour or trait that demonstrates an individual’s worth as a mate e.g. like a peacock’s tail.

In this instance, the study found a man who is able to drink lots may do so in order to demonstrate his physical toughness when it comes to dealing with the physical impacts of excessive drinking.

“Binge drinking among young men serves as a 'costly signal' to potential mates, such that the binge drinker is capable of bearing the harmful consequences of alcohol consumption,” the research said.

“Because alcohol is a luxury good, alcohol consumption may reflect wealth.”

The study examined the “operational sex ratio” between men and women which indicates the number of people of each gender that are single and seeking a potential partner on an average night out.

They found men are more likely to binge drink when there were fewer women available.

By contrast the opposite was true of women who drank less when larger groups of men were in close proximity. 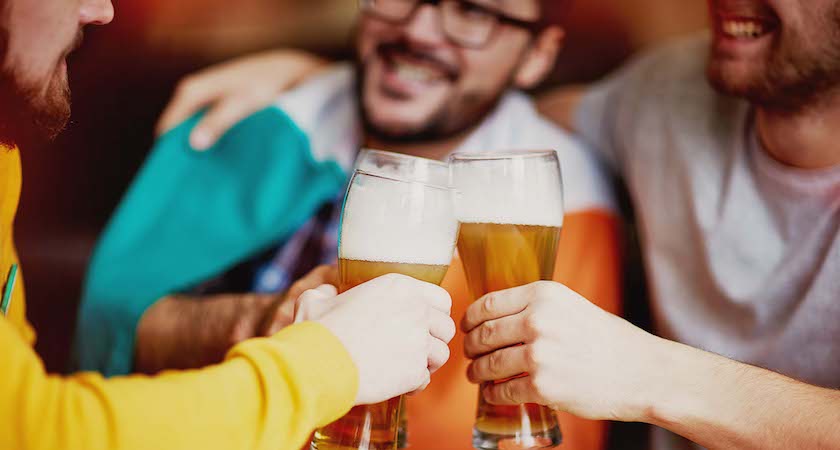 “The ability to withstand these detrimental effects could signal “vigour” and advertise mate quality,’ the study said.

“This idea is related to [a theory called the] handicap principle, where females of many species prefer males that display exaggerated traits that are costly to maintain and develop; hence, these traits serve as “honest” signals. ‘Indeed, occasional drinkers and frequent drinkers were rated as significantly more attractive than non-drinkers, especially in short-term mating contexts.

“Additionally, a recent review of the evolution of human sex-specific cognitive abilities by Geary (2017) identifies alcohol as a stressor/intoxicant that compromises the building, maintenance, and expression of sexually selected traits.

“Thus the ability to function despite consuming alcohol (i.e., to “hold your liquor”), especially among men, might signal that the binge drinker is of sufficient quality to cope with the harmful consequences of alcohol.”