THERE are growing calls for Fr Mychal Judge, the first official victim of the 9/11 attacks, to be canonised as the world’s first saint who was known to be gay.

Fr Mychal was the son of two Irish immigrants from Co. Leitrim and was working as the Chaplain of the New York City Fire Department (FDNY) when he died in the North Tower of the World Trade Center on September 11, 2001.

His final moments were featured in the award-winning documentary 9/11, when he was struck by debris caused by the collapse of the South Tower across the apocalyptic Austin J. Tobin Plaza.

He had been administering sacraments to the largely Catholic, Irish-American and Italian-American firefighters of the FDNY when he died.

A photograph of rescue workers carrying the second-generation Irishman’s body out from the rubble became one of the most iconic images from that fateful day.

As he had not been on board one of the planes or trapped under steel debris, the process of Fr Mychal’s identification was made easier – and he became the first officially certified fatality of 9/11 – or ‘Victim Number One’.

Supporters of his canonisation have cited his heroism on that day, along with his work with the homeless, immigrants, alcoholics and drug addicts, people with HIV and AIDS and the gay community as cause for his being made a saint.

Fr Mychal’s parents Michael Judge, from Keshcarrigan, and Mary Fallon, from Drumkeerin, immigrated to the United States in the early 1920s.

Not long before the attacks which claimed their son’s life, the 68-year-old had visited his ancestral home on the shores of Kesh Lake and returned to New York with a stone from the ruins of the homestead.

Speaking at Fr Mychal’s funeral on September 15, 2001, then Mayor of New York Rudolph Giuliani said he was already “a saint” to the FDNY. 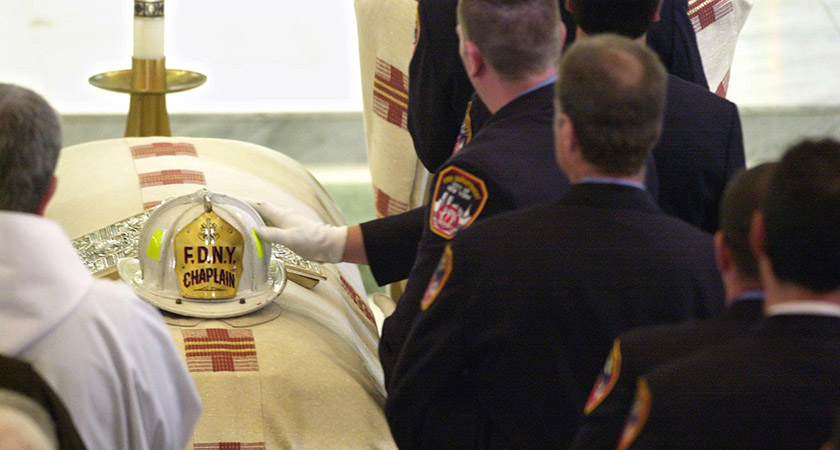 A firefighter touches the helmet of Fr Mychal Judge during his funeral on September 15, 2001 (Picture: Kathy Willens/Getty)

Following the priest’s death, a number of his friends and associates revealed that he was gay – as a matter of orientation rather than practice, as he was a celibate priest.

Francis DeBernardo of the New Ways Ministry, who is leading the campaign to canonise Fr Mychal, said: "The time has come to begin the initial research to make Franciscan Fr Mychal Judge, OFM, a canonised saint in the Catholic Church.

"And we need the help of people to spread the word about such a possibility so that we can gather evidence about Fr Judge’s life and ministry.

“On September 11, 2001, Fr Judge, who was a chaplain for the New York City Fire Department, rushed into the World Trade Center building with other first responders, after terrorists had flown planes into the skyscraper towers.

"As a result of his sacrifice, he died, and is now often referred to as 'Victim Number One' of that tragic day which witnessed the deaths of close to 3,000 people, with over 6,000 more injured.

"He was also known as an unofficial chaplain in the gay community, providing pastoral care and support wherever and whenever he could.

"He ministered, selflessly, too, with HIV/AIDS patients and with people suffering from addictions."

In July, Pope Francis said that people could now be considered for canonisation if they gave their lives for others.

Mr DeBernardo continued: "The only way that we can make Fr Judge’s canonisation a reality is through a mass effort to find people who knew Fr Judge.

"Only through a mass effort to build a network of individuals and organisations who are searching for the necessary evidence and information will we be able to get to even the first step of the canonisation process." 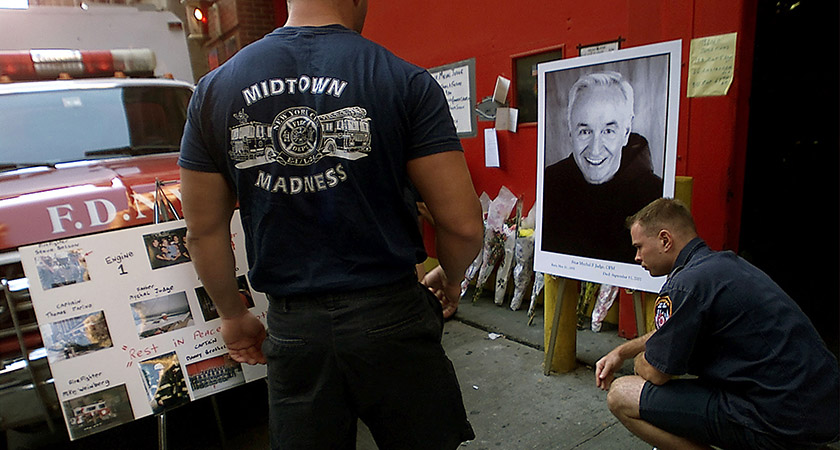 Fr Mychal was a popular figure among firefighters in his role as the largely-Catholic FDNY's Chaplain (Picture: Getty Images)

"I actually knew about his homosexuality when I was in the Uniformed Firefighters Association,” Commissioner Von Essen said. “I kept the secret, but then he told me when I became commissioner five years ago.

“He and I often laughed about it, because we knew how difficult it would have been for the other firemen to accept it as easily as I had.

“I just thought he was a phenomenal, warm, sincere man, and the fact that he was gay just had nothing to do with anything."

The revelations about Fr Mychal’s sexual orientation following his death at 1 World Trade did not come without controversy, however.

A contentious article written by lawyer Dennis Lynch for Catholic.org claimed that Fr Judge was not gay and that any attempts to define him as such were made by "homosexual activists" who wanted to "attack the Catholic Church" and turn the priest into a "homosexual icon".

Nevertheless, friends of Fr Mychal refuted the article with evidence from the priest’s journals identifying himself as a gay man.

Fr Mychal was also a long-term member of Dignity – a Catholic LGBT organisation that advocates for change in the Catholic Church's teaching on homosexuality.

"People who have been involved in Catholic LGBT activities are very likely to have met him or perhaps to have prayed to him for a miracle,” explained campaigner Mr DeBernardo.

“That is why we are asking you to share this information,” he added.

"Of course, those who knew Fr Judge from other activities – his parish work, his NYC Fire Department chaplaincy, his ministry to HIV/AIDS patients and addicts – are also sought.

"An official request for the Cause of Fr Judge’s canonisation can only be submitted after a great deal of this initial research is gathered.

"This may take many months, perhaps even a year or more.”