THE Irish community in Cardiff is gearing up to commemorate the Great Famine this May for this first time in six years.

The annual event concluded in 2009 after 10 years – but a permanent monument remains in place, marking the influence of the Irish who immigrated to Wales during this dark period of Irish history.

Pauline Lomax is originally from Belfast and has been living in the Welsh capital for 20 years.

Along with the Wales Famine Forum, the group who held the annual commemorations until 2009, she is preparing up for a ceremony on May 10.

“The Cardiff event will be a short ceremony of remembrance for the victims of the Great Hunger,” she said. “And we want to remember those Irish who came and made Wales their home during this bitterly harsh period of Irish history.”

May 10 is this year’s Irish National Famine Memorial Day, which generally falls on the second Sunday of May each year.

Though mainly celebrated in Ireland, Irish people all over the world use the occasion to remember the one million who died, and a further two million who left Ireland to seek their fortune abroad. 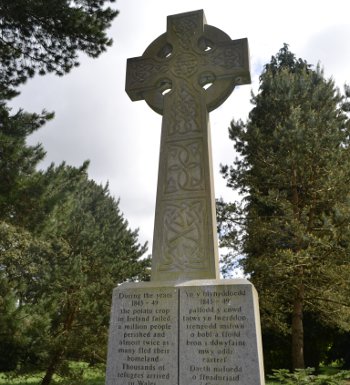 The cross erected in Cardiff 20 years ago

Ms Lomax, who is one of the administrators on the worldwide Facebook group for commemorating the Famine, believes many people are unaware of the history of the Famine and that this is an important opportunity to educate people about it.

“It wasn’t until I went up to Donegal that I had realised what had happened,” she said. “The Diaspora will actually want to know more about the Famine so it’s important that we remind people what went on.”

Before the Famine, Ireland had a population of about nine million – and this fell by about a third by the 1860s.

The massive decrease in population was a combination of deaths from starvation and mass emigration – to Britain, America and many other countries - firmly establishing the Irish Diaspora worldwide.

Wales was one of the places that many Irish settled in and the legacy is still strong in the area.

“The Wales Famine Forum spent about 10 years fundraising for a memorial to the victims of the Famine for Cardiff,” said Ms Lomax. “The cross was erected in 1995 and now there are just three in Britain – the one in Cardiff, one in Liverpool and one in Motherwell.”

The group succeeded in erecting a cross in Cathays Cemetery in the city – and began holding the annual memorial service from 1999.

Is there a Famine memorial service taking place in your area? If so tell us about it by emailing [email protected]://http://irishpost.co.uk or calling 020 8900 4354.