CONOR MCGREGOR has issued a threat to old rival Khabib Nurmagomedov ahead of his UFC comeback against Donald Cerrone.

The Notorious sent a warning to the Russian via Instagram, posting a picture of himself alongside the caption “Little scurrying rat I’m coming”.

The message, which has since been deleted, comes as the Irishman prepares to return to the Octagon for the first time since losing to Nurmagomedov back in October 2018.

McGregor is facing ‘Cowboy’ Cerrone at the upcoming UFC 246 on January 18.

The Notorious will be granted his long-desired rematch with Nurmagomedov provided he defeats Cerrone next month.

McGregor previously warned the Russian: "you can run but you cannot hide." 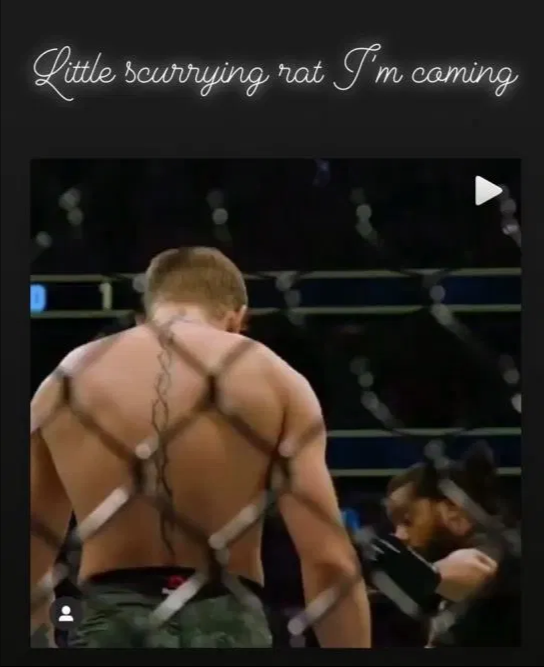 However, the Russian has hinted at hanging up his gloves after UFC 249.

The 31-year-old told RT Sports:  “Well, we don’t have a plan for when we’re going to finish but I do know it is not over the mountains, as they say.

“Now we have an opponent, Tony Ferguson, a very serious opponent. And I think it’s necessary to have this fight then we’ll sit down and think about what’s next.

“We’ll consider whether there’s any point in fighting any more. There will always be a reason to fight, money. But will we need it? We’ll think about it.

“I feel good now. I’m 31 and it’s a very good age to fight, and for sport. I’m far from retirement age, but it’s around the corner.