The photo was posted to Facebook by Legelelas Safaris, whose page has since been disabled

A BIG game hunting couple who photographed themselves kissing alongside a slain lion have sparked worldwide outrage.

Darren and Carolyn Carter embarked on a lovely couple’s holiday this year, but rather than dinner with a view of the Eiffel Tower they decided to really spice things up and go murdering wild animals in South Africa instead.

Legelas Safaris, a South African company that sets up big hunting trips, posted the photo of the pair shifting like they’re at their first teenage disco, behind the body of the “monster lion”, and the backlash was swift and righteous. 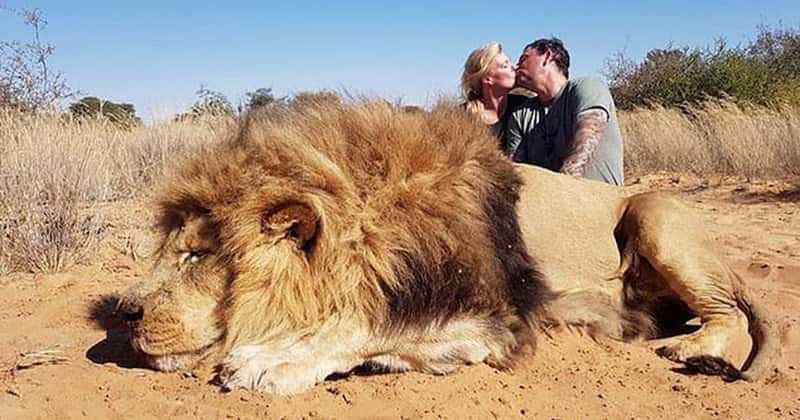 The photo was posted to Facebook by Legelelas Safaris, whose page has since been disabled

The company’s website and Facebook page have been taken down amid the international fury but people have taken their pitchforks to social media giant Twitter instead.

These 2 third class cheap dumb coward couple #DarrenCarter & #CarolynCarter think they hv set new standard of bravery. I Just want anyone to shoot them in their mouth! #trophyhunting pic.twitter.com/jvGkscX1Zq

It has emerged that the couple, from Canada, run a Taxidermy business in their hometown of Alberta, which makes sense as they’re clearly such fans of dead animals. You can imagine how that conversation went.

“Sure honey, where will we go?”

What are the chances this couple are “so excited” for Disney’s upcoming remake of The Lion King, not realising that they’re literally the bad guys.