STEVEN Anderson, an American hate-preacher who praised the Orlando shooter who massacred 49 people in a nightclub in 2016 is due to visit Ireland later this month despite being banned from entering most of Europe.

The pastor known for his anti-LGBT views has in the past called for the “execution” of all gay people and described the victims of the Orlando nightclub shooting “a bunch of disgusting perverts and paedophiles.”

The controversial figure confirmed he’ll be flying to Dublin on May 26 despite being banned last week from entering the EU’s common travel zone, known as the Schengen area. 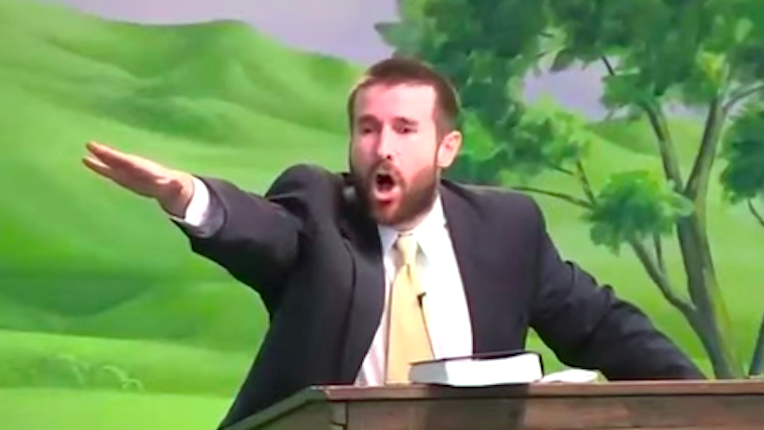 Anderson has garnered attention for his controversial views and explosive rants

The ban was announced in Dutch Parliament by The Netherlands’ security minister Mark Harbers, saying: “There is no place in a democratic nation like ours for discrimination, incitement to hatred or intolerance or violence on any grounds.”

Anderson has been banned from entering the UK, which is outside the Schengen area, as well as 27 EU countries, and was also barred from entering Canada, South Africa, Jamaica and Botswana due to his comments and controversial views.

More than 11,000 people have signed a petition urging the Irish government not to let Anderson into the country.

William Jenkins, who created the petition, wrote: “Steven Anderson is a Holocaust-denier, Islamophobe and anti-LGBT extremist who is scheduled to speak in Dublin, Ireland on May 26, possibly in an attempt to get people to change their minds on last year’s abortion referendum.”

“This petition is for the people to show that they want Pastor Steven Anderson banned from entering the Republic of Ireland.” He added.

Anderson founded the Faithful Word Baptist Church in Arizona, USA in 2005 and received national attention in 2009 after saying he was praying for death of Barack Obama during a sermon.

His views on homosexuality continue to cause public stirs, particular with comments like the one he made back in 2014 where he stated that “if you execute the homos like God recommends, you wouldn’t have AIDS.”

Baptist Church orders removal of Jesus statue for being 'too Catholic'