AN UNKNOWN Irish artist has been discovered working in a London basement surrounded by thousands of his paintings which have lay hidden for years. 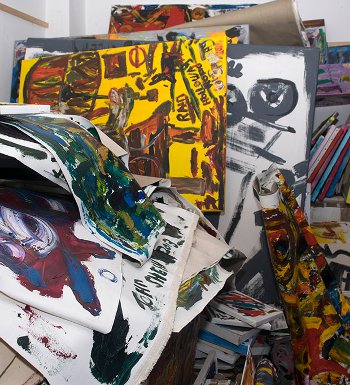 There the 68-year-old entertains himself by playing the flute and the banjo. He also writes poetry. But mainly he paints.

He paints so much that every nook and cranny of his small abode is fit to burst with his colourful, powerful artworks – which are stacked high in each room and even find a home in the bath.

His passion for creating art is described as all-consuming by the artist, who claims: “It’s like a hurricane, blowing very fast. It’s like desperation to get the paints on there. When I’m in it I’m not really worried whether it’s dried or whatever, it’s the action, it’s the movement.”

Despite having no real intentions to share his craft with the world, after being discovered earlier this year by Atom Gallery founder Mark Perronet Mr Sheehy is about to make his first big splash onto the capital’s art scene. 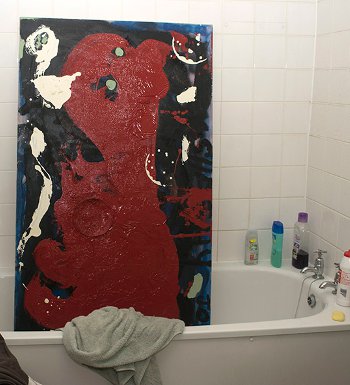 This week the Atom Gallery will host his first full exhibition, entitled John J Sheehy: An Introspective, which will bring some of the best of his collection to the public eye for the very first time.

“John is a genuinely driven artist, as he says, he has to do it,” Mr Perronet told The Irish Post.

“What he doesn't do is any sort of selection, so that task came down to me and it has been a great pleasure choosing work from the thousands of pieces he has in his flat for this exhibition - which will mark the first time most of these pictures have been exhibited anywhere.” 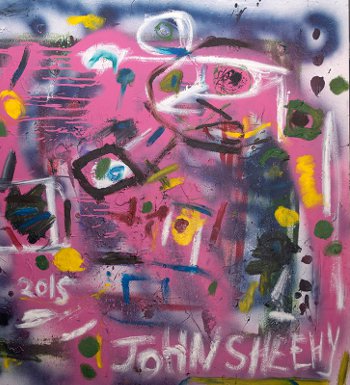 The Atom Gallery will exhibit John Sheehy's work this week

Having left his home in Kerry for London as a young man, Mr Sheehy worked in the construction trade for a number of years.

It was his involvement with that organisation’s art group that brought to light his artistic talent, and while he only started painting at the age of 51 he hasn’t stopped since.

While his subject matter focuses largely on his memories of Ireland - including horse fairs, farm animals and folk musicians – Mr Sheehy also tackles London scenes in his work, and often adds words or slogans to his creations.

Whatever the subject his compulsion to paint never fades.

“Yes I’m compelled to do it,” he claims.

“I have to do it. It’s a necessity. It gets me through the day, see. It’s a must. If I don’t do it then my day is going to be a bit rough, like. It’s like entering another planet.”

Discovered by the Atom Gallery this year, Mr Sheehy previously revealed some of his work at an collaborative exhibition held at the Peter Bedford Housing Association in North London.

John J. Sheehy: An Introspective is open at the ATOM Gallery in London N4 3EG from Saturday, May 30 until Saturday, June 27. For further information visit www.atomgallery.co.uk