POLICE have confirmed that a device found close to a war memorial before a Remembrance Day commemoration in Omagh yesterday was a viable pope bomb.

The Police Service of Northern Ireland (PSNI) said the bomb was an attempt to disrupt Sunday’s parade in the Co. Tyrone town, which suffered one of the deadliest atrocities of the Troubles in 1998.

He said: “This small but potentially dangerous device was left to cause the maximum amount of disruption to the Remembrance Sunday commemorations.

“Whilst our investigation into the incident is at a very early stage, one strong line of inquiry is that violent dissident republicans are responsible.

“Their actions today have demonstrated the disregard and disrespect they have for this community, which has already suffered so much pain and hurt at the hands of terrorists.”

The alert began after the discovery of a suspicious object on Drumragh Avenue in Omagh on Sunday morning.

The Remembrance Sunday service was able to go ahead despite the threat. 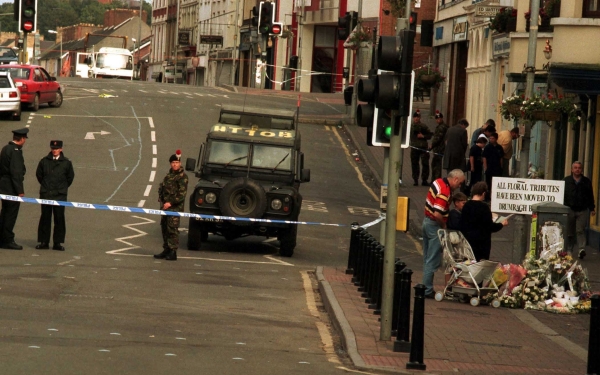 Omagh was the scene of a devastating Real IRA bomb on August 15, 1998 that killed 29 people (Picture: Photocall Ireland)

In August 1998, 29 people were killed when a Real IRA bomb exploded in the centre of Omagh.

She tweeted: "On a day we remember the carnage of Enniskillen 30 years ago it is disgusting that Remembrance Sunday in Omagh was disrupted by those who left a suspicious device in the town."

Northern Ireland secretary James Brokenshire said there is "no place in society" for those responsible.

"Sickening and despicable that on Remembrance Sunday when we gather to honour those who paid the ultimate sacrifice that someone should have placed a device in Omagh,” he said.

"There is no place in society for these faceless people who want to drag us back to the dark days of Northern Ireland's past."

She said: "The ongoing security alert in the Drumragh Avenue area has caused significant disruption to local residents and to Remembrance Day commemorations.

“Everyone has a right to remember their dead with dignity and respect and those responsible for this security alert have shown complete disregard for all the people of this community."

Anyone with any information is urged to contact police in Omagh on 101 quoting reference number 100 12/11/17. Information can also be given anonymously through the independent charity Crimestoppers on 0800 555 111.