THE now famous Donald Trump baby blimp has been granted permission to fly over London during the President's visit to the UK next week.

London Mayor Sadiq Khan gave the green light on Friday for the huge effigy to be launched.

Owners of the blimp say they are planning to unleash ‘baby Trump’ over Parliament Square on Tuesday, on the second day of his visit.

They must wait for final approval from the Metropolitan Police, who are expected to give their decision on Monday.

Organisers have warned, though, that the blimp can only be flown if they’re able to fundraise enough money. 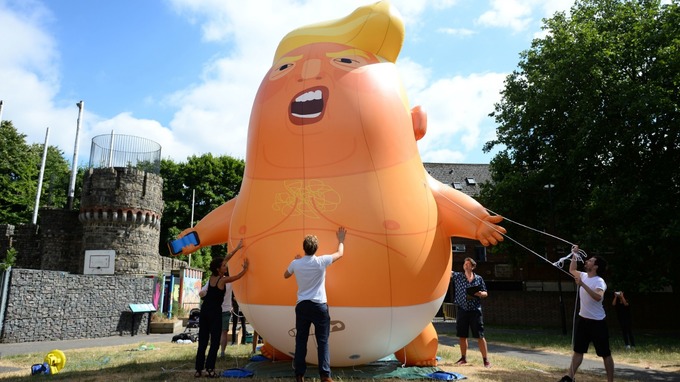 Anna Vickerstaff, a Trump blimp ‘babysitter’, said: “Now that the GLA (Greater London Authority) has given us permission, we’re almost ready to fly the baby.

“All we need now is for the public to help us to hit our fundraising target in support of the groups who are fighting the impacts of Trump’s disastrous policies.

“We’ve promised to get the baby in the air again - but only if and when we raise the money for these groups.

“We’re all for making a joke out of Trump, but we won’t let the opportunity pass to support those fighting the very serious impacts of what he’s doing.” She said.

The crowdfunder page stands just shy of £20,000 as of Saturday morning, with a further £10,000 needed in order to unleash the blimp.

Trump is due to meet up with outgoing Prime Minister Theresa May on the day the blimp is being set for take-off.

He will also be visiting Prince Charles and the Duchess of Cornwall on Tuesday too.

Several public protests are being planned including one due to start at 11am on Tuesday morning in Trafalgar Square.

The baby blimp was first created for Trump’s previous state visit to the UK back in 2018.