There’s an honest mistake, and then there’s this.

The $50 hats appeared to disappear from sale after the error went viral on social media, and we thought (and prayed) that would be the end of it.

That’s because President Trump has launched another 'St Paddy's MAGA Hat' for 2018 – with the exact same, ridiculous flaw.

And it’s pretty clear these aren’t just leftover caps from last year – as the year ‘2018’ is clearly emblazoned across its right hand side. 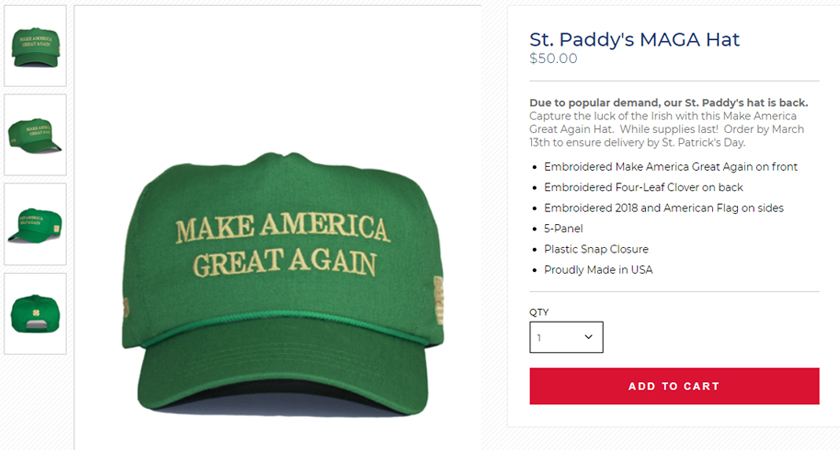 Even though we shouldn’t have to, let’s reiterate this – the four-leaf clover has nothing to do with St Patrick's Day, or Ireland for that matter.

The green, leafy plant we actually associate with the March 17 is, of course, the shamrock – which is specifically a sprig of the clover plant with three leaves, not four.

It’s an important distinction, as St Patrick is said to have used the three leaves of the shamrock to teach pagans about the Trinity in Catholicism.

As The New York Times so succinctly put it last year: “A four-leaf clover is not a symbol of Ireland. It is just a plant."

No amount of ‘alternative facts’ can change Irish history.

How would you lads like it if we made a July 4 hat with a pigeon instead of a bald eagle, eh?

We’re seriously thinking about it. Consider yourself warned!