A DONEGAL woman was left shocked “beyond words” after her husband and two children were killed in a tragic road accident in bad weather.

John Mullan, 49, and children Tomas, 14, and Amelia, six, from Moville, died when the car they were in crashed off the road and overturned into Lough Foyle at Quigley’s Point in wet and windy conditions on Thursday evening.

The family had been returning from an evening out in Derry.

Healthcare worker, wife and mother Geraldine Mullan, 45, was able to free herself and get the couple’s two children out of the car in the immediate aftermath.

However, despite her best efforts, all three were pronounced dead at the scene of the crash.

Speaking to the BBC, Fr John Farren, a parish priest from Iskaheen in Donegal who arrived on the scene to provide support, described how Geraldine was in a state of shock "beyond words" in the immediate aftermath of the crash.

"It was indescribable, for her to realise what was happening, to try and seek help, to try to get out of the car... and then to realise the loss of her family within the space of a few minutes," he said

"The emergency services were on the scene and did tremendous work in the conditions, the ambulance, fire service and gardai helped to retrieve the bodies from the scene and brought them out of the water."

"The mother was attended to in the ambulance and I was talking to her when I got there. She was obviously hysterical from grief and we said prayers and anointed the family in her presence and then, before she got back in the ambulance, she thanked everybody that was there.

"That was really unbelievable, that she had the presence of mind to do that. It was an awful scene." 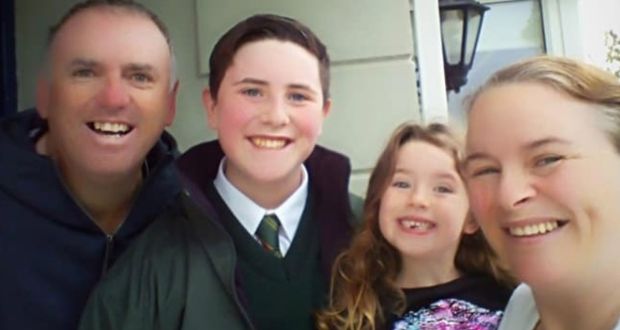 A popular figure in the local area, John Mullan ran a garden centre in Moville while his wife works as a nurse manager at the cancer unit in Letterkenny General Hospital, Fr Farren added.

Post-mortem examinations are due to take place at Letterkenny University Hospital this weekend.

Gardai have issued an appeal for anyone who may have been travelling on the road between 10pm and 10.30pm on Thursday to come forward.

They particularly want to hear from anyone who may have seen a Black Mitsubishi ASX, registration number 11 DL 1566, in the area at the time of the crash.