A RYANAIR passenger who was racially abused onboard one of the Irish airline's planes has spoken out about the incident in an emotional appearance on ITV's This Morning.

Delsie Gayle, 77, was left distraught after a fellow flier labelled her a "stupid, ugly cow" and "ugly black bastard" on a Ryanair flight to London Stansted at Barcelona Airport on Friday.

The Jamaican-born pensioner was left in tears as she and hosts Eamonn Holmes and Ruth Langsford watched footage from the vile incident, which has gone viral around the world.

She said she felt "very low" in the wake of the incident and claimed police would have "locked her up" if the situation had been reversed.

Delsie added that she would never fly with Ryanair again as her daughter slammed the company.

Carol Gayle claimed flight attendants failed to deal with the situation by moving her mother instead of removing the man from the jet. 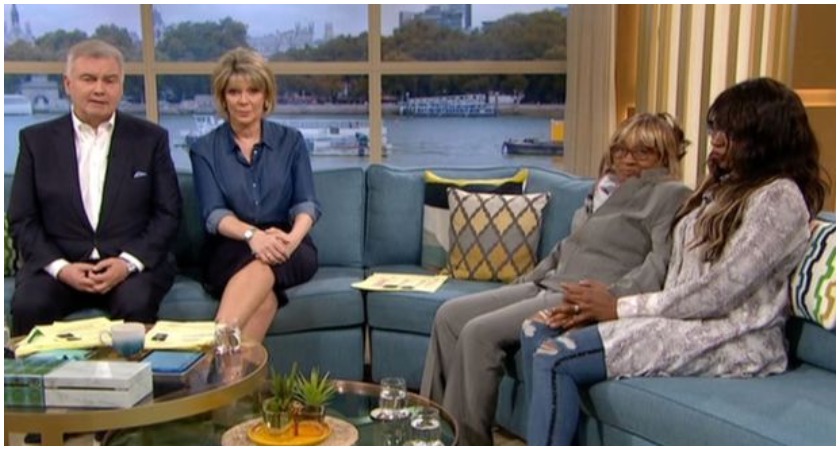 Delsie Gayle, 77, appearing on This Morning with her daughter Gayle (Image: ITV)

She said: "I was surprised. I had said from the beginning he should be taken off. I was shocked. I called all the flight attendants but only one was dealing with it.

"I asked the gentleman, he said 'I never heard anything'. The head attendant in charge said 'I was told about something but I didn’t think it was serious enough'."

Eamonn, 58, also slated Ryanair, telling viewers the airline had failed to offer a comment or an apology.

He said: "Ryanair you choose not to comment further. As usual you treat your customers with utter contempt.

"An apology would have cost you nothing."

On Sunday, Ryanair tweeted that it could not comment further on the matter as it had been reported to Essex Police.

The force said today they had identified the man involved and passed the information to the Spanish authorities, who are leading an investigation.

Carol called for the man to be "charged for racial abuse".

She added: "Mum has been feeling really low and depressed. It's coming up to a year since my dad's death. I wanted to take her away to lift her spirits.

"We had a lovely time. To come back and finish with this was horrible."

Viewers were also left in tears by Delsie and Carol's emotional appearance on the show.

One tweeted: "How this poor woman and her family have been treated is disgusting, tears in my eyes #ThisMorning."

Another wrote: "This horrible racist man needs to me named and shamed. Sending all my love and prayers to Delsie and her daughter."