EMINEM HAS never been one to shy away from controversy.

However, even the US rapper’s most vociferous fans might admit that his latest controversy is a step too far.

The artist also known as Marshall Mathers has sparked widespread condemnation after appearing to make light of the 2017 Manchester Arena bombing.

Eminem surprised fans this week with a brand-new album.

Music To Be Murdered By features collaborations with Anderson .Paak, the late Juice WRLD and, most surprising of all, Ed Sheeran.

I love Eminem but this guy really has a bar in his new song mocking the Ariana Grande concert bombing and then has a explosion noise straight after..

Tf wrong with #Eminem?
I’ma have to disagree with him on this line because that was a traumatizing event for people who attended in 2017. Some people perished. Ariana was traumatized from the event. I know he says crazy things but, this outta line!#MusicToBeMurderedBy: pic.twitter.com/8bfOqvwxyq

eminem really said "bombs away like i'm outside an ariana concert" and then put an explosion sound effect in his new song Y'ALL?? 😳😳😳 pic.twitter.com/5VQ9gnsmKb

A surprise release by the Stan songwriter, the album has sparked plenty of discussion online – though not all of it has been positive.

Many are upset with the lyrics featured on the track Unaccommodating, which features a reference to the 2017 bombing.

On the track Eminen says: "I’m contemplating yelling ‘Bombs away’ on the game/Like I’m outside of an Ariana Grande concert waiting."

The line is a reference to the incident that saw 22 people killed when a suicide bomber targeted Ariana Grande fans leaving a concert in Manchester three years ago. 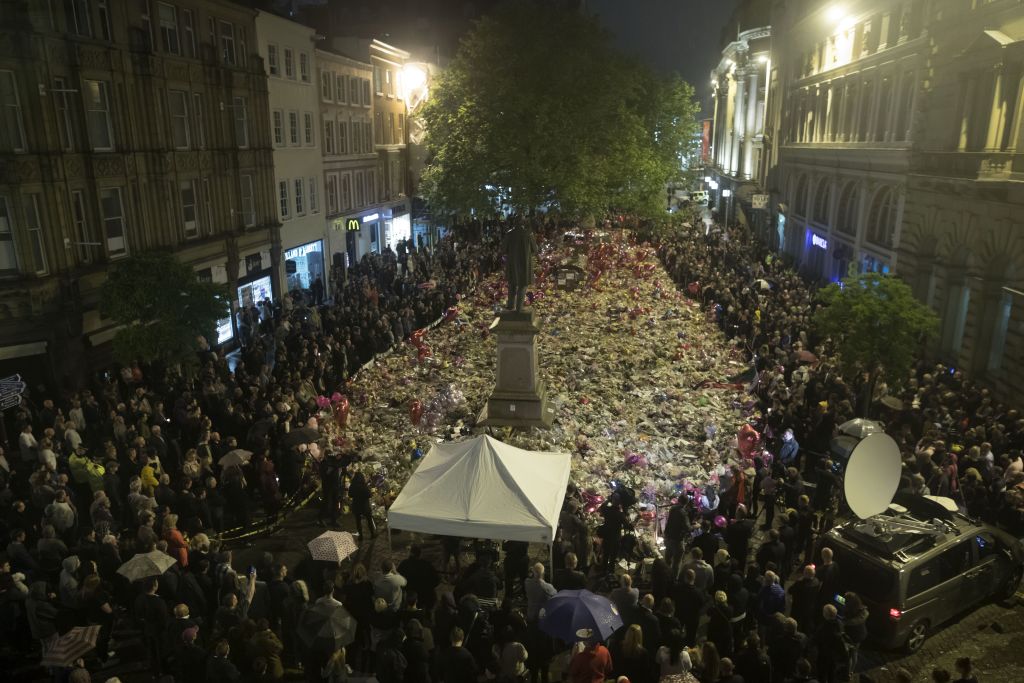 Members of the public take part in a vigil on St. Ann's Square in Manchester, northwest England on May 29, 2017, exactly one week after a bomb attack at Manchester Arena killed 22 and injured dozens more.
The attack, which has been claimed by the Islamic State jihadist group, targeted concertgoers at the end of a show by US teen pop idol Ariana Grande. / AFP PHOTO / JON SUPER (Photo credit should read JON SUPER/AFP via Getty Images)

It’s not the first time the outspoken rapper has referenced the bombing.

In 2018, Eminem released an 11-minute freestyle called Kick Off referencing the attack.

In the rap, he says:

“Like an Islamic regime, a jihadist extreme radical / Suicide bomber that’s seeing / Ariana Grande sing her last song of the evening / And as the audience from the damn concert is leaving / Detonates the device strapped to his abdominal region/ I’m not gonna finish that for obvious reasons.”

Mathers' comments come despite the US rapper being among those to show support fort the victims and families of those affected.

Join me in helping Manchester victims & their families, Make a donation to the @BritishRedCross and @MENnewsdesk https://t.co/JchJtYOdMU

Elsewhere on the new album, Eminem touches on the issue of gun control in the US.

On the track Darkness, he raps from the point of view of a spree shooter targeting victims from his hotel room.

The song is a reference to the 2017 Las Vegas shooter who killed more than 50 people at Route 91 Harvest music festival.