SIR Ernest Shackleton, Ireland’s greatest explorer and the Irishman who made the epic expedition to the Antarctic 100 years will be celebrated at the Irish Cultural Centre, Hammersmith in London this week.

English journalist and prolific author, Michael Smith will speak at the Centre on Wednesday, May 13, marking the centenary of Shackleton’s remarkable Endurance expedition in 1915. 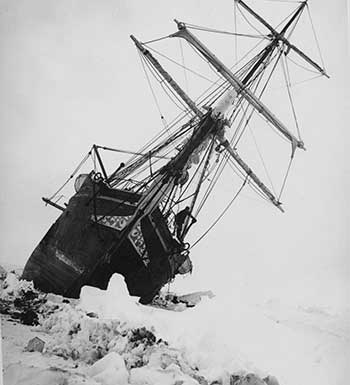 Shackleton’s ship Endurance was crushed by ice in 1915

Smith is Shackleton’s newest biographer and author of An Unsung Hero – Tom Crean, the No 1 best-selling book about the Kerry-born explorer, Tom Crean.

A children’s adaption of the book is now on the school curriculum in Ireland.

Smith will "reveal the stories of the Irishmen who accompanied Shackleton into the ice in 1915, including Tom Crean and Tim McCarthy from Kinsale."

After sailing from London on the outbreak of war in 1914, Shackleton’s ship Endurance entered Antarctic waters in early 1915 and was crushed by the ice.

All 28 men survived on the ice for nearly 18 months before Shackleton, Crean and McCarthy sailed the tiny James Caird lifeboat across the violent Southern Ocean to fetch rescue from South Georgia.

The talk will be illustrated by historic photographs from the expeditions.

“The voyage of the James Caird is one of the greatest feats of maritime history and it is remarkable that three of the six men on board were Irish,” says Smith.

“It is also hugely significant that the voyage of the James Caird began on Easter Monday 1916, one of the most outstanding dates in Irish history.”