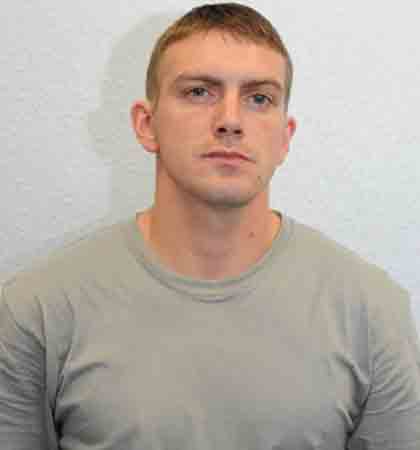 Ciarán Maxwell has been jailed for 18 years. (Picture: Met Police)

Ciarán Maxwell, 31, of Exminster, Devon and formally of Larne, Co. Antrim, was sentenced to 18 years' imprisonment at the Old Bailey on Monday, July 31.

The father-of-one was stockpiling and manufacturing large amounts of explosives, weapons and ammunition in hides across Northern Ireland and Devon, which he admitted to police would have been used to assist others - thought to be dissident Republican group the Continuity IRA - to commit terrorist acts had they not been discovered.

Originally from Larne, Maxwell was brought up a Catholic in a largely Loyalist community - when he was 16 years old Maxwell was badly beaten by a Loyalist gang with golf clubs and iron bars.

The case was brought to the attention of police thanks to members of the public who noticed suspicious items buried in woodland in Northern Ireland, and reported it to police.

Maxwell, who had served in Afghanistan, previously pleaded guilty to engaging in conduct in preparation of terrorist acts (contrary to section 5(1) of the Terrorism Act 2006), as well as possession with intent to supply cannabis and possession of articles for use in fraud on Friday, February 3.

Commander Dean Haydon, head of the Met's Counter Terrorism Command, said: "An extremely dangerous terrorist has been caught, and a significant and substantial amount of explosives and weapons have been seized - all thanks to members of the public, who noticed suspicious items and reported it to the police.

"This case shows what an important role the public has in fighting terrorism and how police and security services rely on the eyes and ears of the public to help us tackle the threats we all face."

Assistant Chief Constable Stephen Martin, head of the Police Service of Northern Ireland's (PSNI) Crime Operations Department, said: "Ciarán Maxwell is an extremely dangerous individual who was capable of gathering a large amount of munitions over multiple sites in Northern Ireland and England. 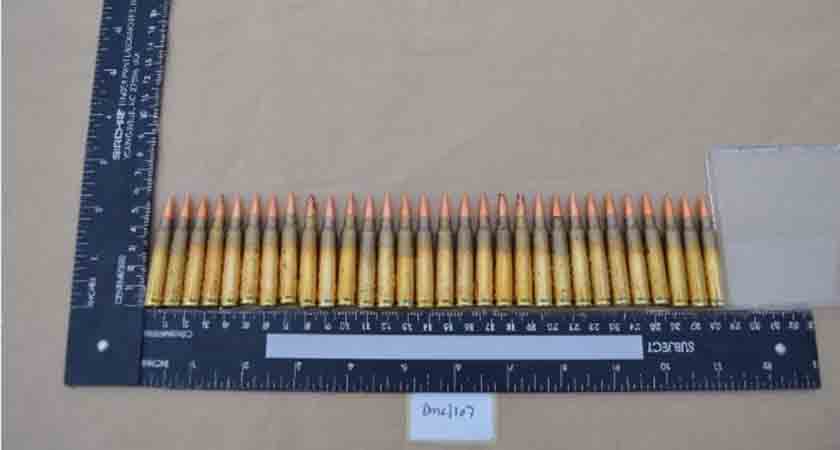 "It is obvious that these materials and munitions were sourced, gathered and constructed over significant periods of time which demonstrates Ciaran Maxwell's determination and committed planning.

"These items are designed to cause damage, serious injury and to kill.

"As a result of these finds, and the arrest and sentencing of Ciarán Maxwell, there is no doubt in my mind that Northern Ireland and England are safer places to live.

"I would very much like to thank my police colleagues in Great Britain for their partnership and professionalism in this case. 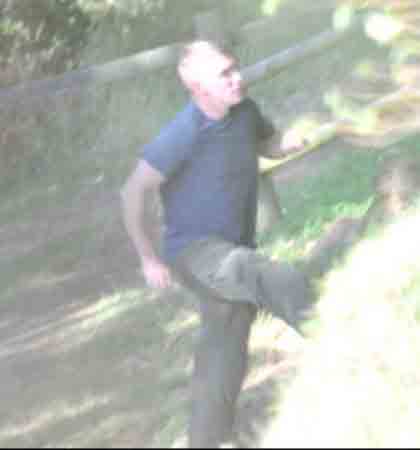 "I also want to thank the members of the public who first alerted police to the hides in both Carnfunnock and Capanagh.

"Without them acting on their suspicions Maxwell may not have been caught.

"This case clearly demonstrates the vital role communities have in support of their police service."

Asst Chief Cons Martin also said that a 'small number' of devices made by Maxwell may still be in circulation.

An investigation was initially launched by PSNI in March 2016 after a member of the public reported suspicious items found buried in Carfunnock Country Park, Larne.

They also found a number of other items that could be used to make detonators and firing systems - in effect all the component parts needed to make improvised explosive devices (IEDs). 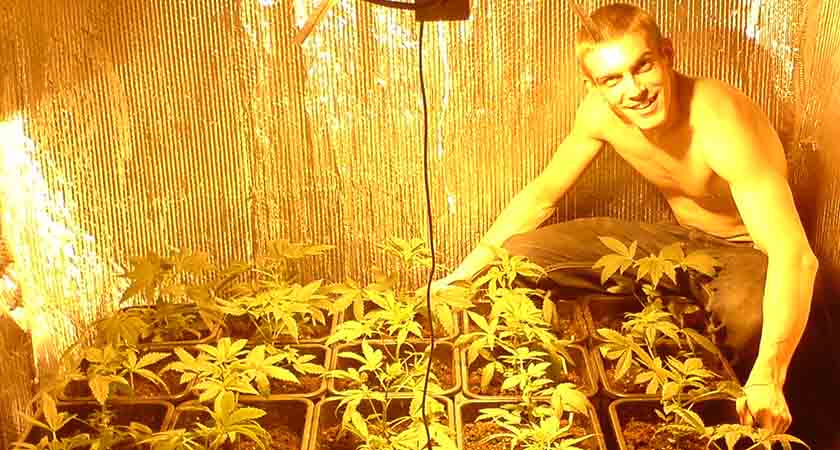 In photographs recovered from his memory card by Police, Maxwell was pictured alongside cannabis he was producing to supplement his income. (Picture: Met Police)

Two months later, more suspicious items were reported to police by members of the public at a site in Capanagh Forest near Larne.

In August 2016, forensic evidence was uncovered that linked Maxwell to items recovered from both sites in Northern Ireland.

Given Maxwell was working as a Royal Marine at a Somerset military base and lived in Devon, the investigation was widened and coordinated by the Met's Counter Terrorism Command, working with colleagues from PSNI, as well as the South West Counter Terrorism Intelligence Unit, Devon and Cornwall and Avon and Somerset police forces.

Maxwell was seen by police visiting Powderham New Plantation in Devon and he was arrested on 24 August 2016 at his workplace at Norton Manor Camp in Taunton.

When they searched the woods in Powderham, officers found 19 hides with more items and chemicals linked to the production and manufacture of IEDs.

Officers also found memory cards, digital devices and hand-written notes, including 'to-do' lists detailing items he needed to buy and tasks he was carrying out relating to the manufacture and storage of IEDs. 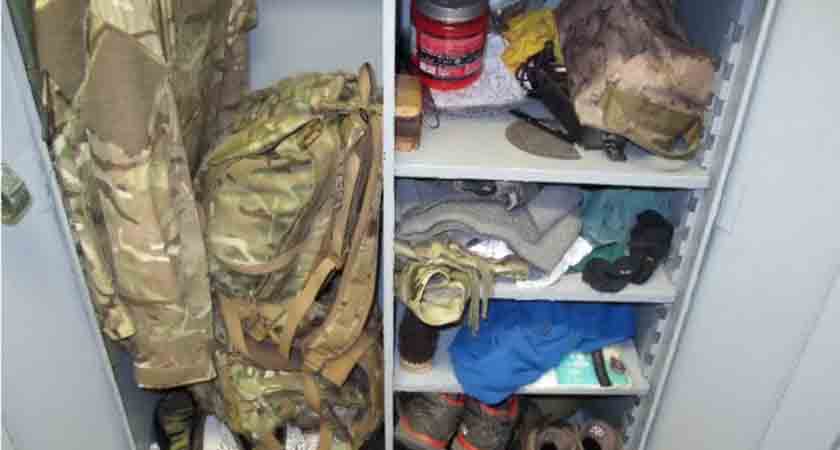 On one of the devices, officers also found detailed lists of more than 300 Government, military, police and judicial buildings and personnel that Maxwell had researched.

From the array of material recovered from the hides, his home address and his work address, officers found evidence that Maxwell had been researching IEDs and explosives and was stockpiling materials from as early as 2011.

Police found a small cannabis factory hidden in the woods at Powderham and further enquiries revealed that Maxwell was producing the cannabis to sell on in order to supplement his income.

Copies of several of his colleagues' bank and identity cards were also found on Maxwell's laptop along with digital guides on how to use these kind of details to commit fraud - although he had not actually defrauded any of his victims. 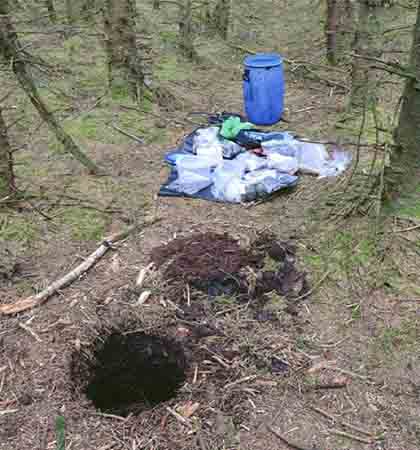 During questioning, Maxwell told officers about a further five locations in the Larne area where he had hidden more weapons and materials for making explosives, as well as items including a police vest, a copy of a PSNI ID card and other items of police uniform.

Materials to make an additional 19 pipe bombs, two anti-personnel mines, one EFP, three booby-trapped torch IEDs and around 100 firing systems and initiators were also recovered from his hides.

Commander Haydon, added: "Maxwell has never indicated to us what his motivation was, and although our investigation revealed he has some links to violent dissident republicans, he was largely acting alone in stockpiling and manufacturing these weapons and explosives. 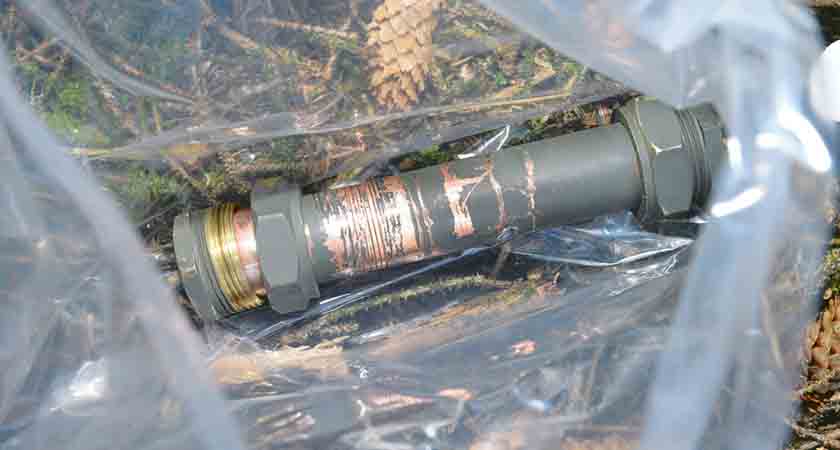 One of the pipe bombs recovered from Northern Ireland. (Picture: Met Police)

"Whilst we found no evidence that an attack was imminent, he clearly carried out research on potential targets and there was no doubt that he intended the bombs and weapons to end up in the hands of terrorists.

"This case shows the strength of how police forces work together through the UK's Counter Terrorism Network.

"As soon as Maxwell was identified as the suspect, we coordinated a large-scale investigation and police operation across the southwest of England and Northern Ireland, which was both extremely fast-paced and complex.

"This has prevented a huge amount of lethal weapons from falling into terrorist hands and an extremely dangerous man is now behind bars."

Speaking after the sentence was delivered, Secretary of State for Northern Ireland Rt Hon James Brokenshire MP said: "I pay tribute to the police and other agencies in successfully bringing this case before the courts. This has undoubtedly saved lives.

"A large volume of dangerous material was seized and this significant jail sentence is an indication of the harm that this individual posed."

Maxwell was sentenced to 18 years' imprisonment, with an extension of five years on licence.

People are urged to report any suspicious activity to police, in confidence, by calling 0800 789 321.

Alternatively, call Crimestoppers, which is completely anonymous on 0800 555 111.