The Father Ted duo of Father Ted Crilly and Father Dougal McGuire have been named in a ranking of the top 50 greatest on-screen friendships from the world television and film.

Together, they formed one of the funniest double acts to ever grace the world of comedy with Dougal the dim-witted comic foil to Ted's increasingly frustrated straight man.

Over the course of three series and 25 brilliant episodes, they went to hell and back together dealing with everything from out-of-control milk floats to Father Jack.

But while the relationship between Father Ted and Father Dougal proved the cornerstone of arguably the greatest sitcom to ever come out of Ireland, that wasn't enough to earn the pair top spot in this new countdown.

The Irish pair had to make do with 15th place on the list of the 50 best on-screen friendships of all time with  Joey and Chandler’s bromance in Friends coming out on top.

The sitcom stars' relationship, which played out over 10 seasons of the popular sitcom, has been deemed the most memorable in TV and film.

A study of 2,000  people  also named the kinship between fellow Friends alumni Monica and Rachel as the second-best.

This was followed by Harry Potter and Ron Weasley's heartwarming friendship in third. 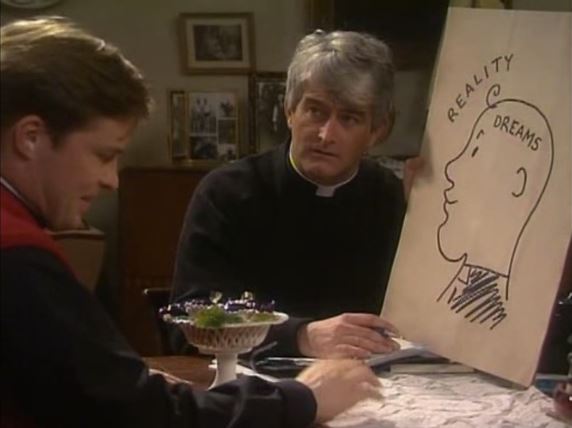 While Woody and Buzz from Toy Story and Carrie Bradshaw’s gang in Sex and the City completed the top five.

Alan Bickerton, area general manager of MGallery Hotels UK, which commissioned the study to coincide with the 25th anniversary of Friends, said: “A best friend is a special thing which many of us treasure in our lives, but few friendships are as perfect as those portrayed in Friends.

“It’s unsurprising that, even when pitted against wizards, living toys, and timeless friendships like that between Christopher Robin and Winnie the Pooh, the friendships which please us most are those that we can relate to and laugh along with.

"Many of us have spent hundreds of hours doing just that when Friends was on the air.”

The study also found a third believe the key to a perfect friendship is plenty of one-on-one time.

A fifth think a good time down the pub is vital, while 20 per cent value a pal they can do absolutely nothing with and still have a good time.

Travelling together was also seen as an activity which brings friends closer together, and one in eight said their fondest memory is travelling with their best mate.

Nearly two thirds of Brits have taken a holiday with their friends at some point in their lives.

Forty-five per cent of those polled would like to take a hotel break with pals, and more than a quarter want to arrange a beach getaway with their closest confidants.

When asked about their experiences with their own best friend, 17 per cent believe their relationship was strengthened by helping one another through tough times.

In fact, 50 per cent believe a best friend can be identified by their willingness to be there for you when times get hard.

And 31 per cent think a best friend is someone who isn’t quick to judge you for your actions.

The survey also found nearly one in 10 Brits have shared a home with their best friend at one time or another.

While fifty per cent said they consider their partner to be their best friend, and 11 per cent met their best pal at work.

More than a quarter are still best friends with their mate from school, while 12 per cent consider their pet to be a furry bestie.

Those polled also revealed the title of ‘best friend’ is not always held by just one person - on average this title has been bestowed on three people they know.

Thirty-four per cent see their best pal every day, while one in 10 make sure to make time for them at least once a week to catch up.

Alan Bickerton added: “Friendships are such an important part of our lives but as the research shows they are something that need to be cherished, and will flourish with new experiences and time spent together.

“We invite friends to make a new memory milestone by experiencing a Friend-Trip* getaway, available from this September 2019 onwards, with a two-night stay at one of three distinguished MGallery hotels UK – Castle Hotel, Francis Hotel and Queens Hotel.”

One lucky person can also win a Friend-Trip at one of these classic British hotels through https://winafriendtripwithmgallery.com/

TOP 50 FRIENDSHIPS IN FILM AND TV

5. Carrie and the girls - Sex and the City

22. Will and Simon - The Inbetweeners

25. Will Smith and Jazzy Jeff - The Fresh Prince of Bel Air

28. Jay and Neil - The Inbetweeners

29. Rocket and Groot - Guardians of the Galaxy

30. Bart and Milhouse - The Simpsons