A FORMER Ulster Unionist Party deputy leader and life peer is under fire after referring to US vice president-elect Kamala Harris as "the Indian” in an inflammatory tweet.

Lord John Kilclooney garnered widespread condemnation over the tweet referencing Harris, who made history this weekend after becoming the first black and Asian-American person to be named Vice President in the US.

The peer tweeted: “What happens if Biden moves on and the Indian becomes President. Who then becomes Vice President?”

Labour shadow minister Wes Streeting was among those to criticise the remarks, telling followers “action must be taken” over the tweet.

“He did it before to Leo Varadkar and now he’s done it to Kamala Harris. This sort of racism would be unacceptable from anyone, but from a member of the House of Lords it beggars belief,” he tweeted.

He did it before to Leo Varadkar and now he's done it to Kamala Harris. This sort of racism would be unacceptable from anyone, but from a member of the House of Lords it beggars belief. Action must be taken. https://t.co/2JbWFbqr9r

Back in 2018, Lord Kilclooney attracted similar criticism after tweeting “typical Indian” in response to a tweet criticising the former Taoiseach, whose father is from India, during a visit to Northern Ireland.

The former UPP member rebuffed any suggestion of wrongdoing in the incident involving Varadkar though, insisting he was “certainly no racist” and that he, in fact, has “an admiration for Indians”.

Lord Kilclooney has also defended these latest remarks made about the vice president-elect.

He said: “I had never heard of her nor knew her name is Harris. India is quite rightly celebrating that an Indian, who has USA citizenship, has been appointed Vice President elect.” 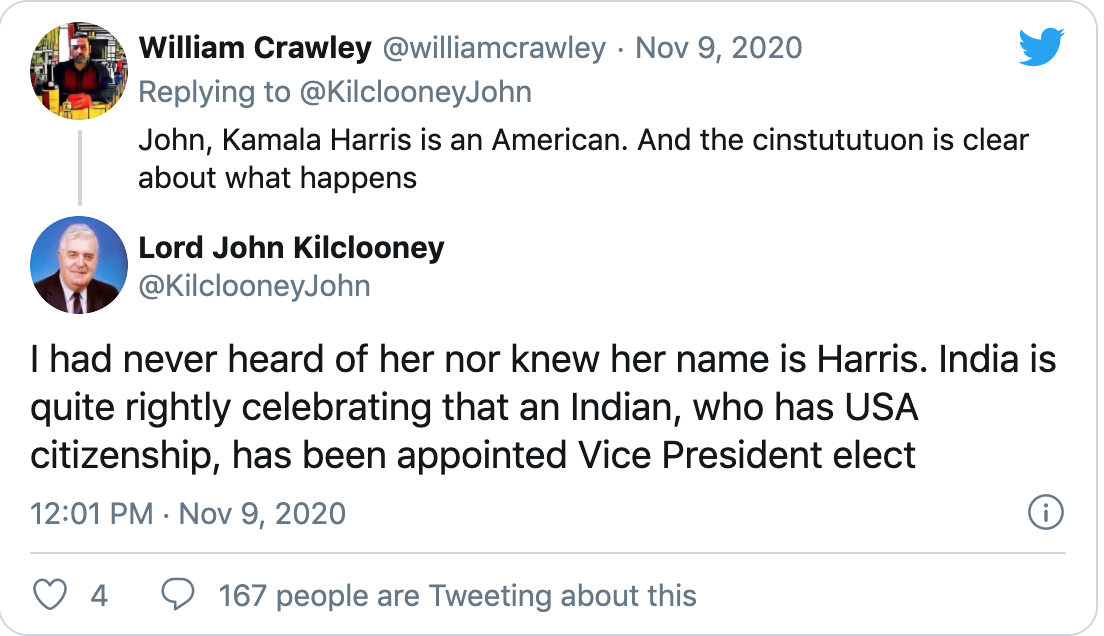 Though it was explained that Harris was born and raised in America, making her an American, the comments fell on deaf ears with the 83-year-old who instead restated his belief “Kamala is an Indian American and Varadkar is an Indian Irishman”.

Even after it was pointed out that Ali was born in Britain, Kilclooney responded "Moeen Ali is proud to be British but racially he is not English. There is a difference between being English and being British!!", adding "A Chinese born in England is Chinese and not English!".

The House of Lords has yet to comment on this latest incident.