A MODERN horror movie classic with a distinctly Irish feel has been named the scariest film of all time in a new scientific poll.

Hereditary stars Dublin-born Hollywood star Gabriel Byrne as the patriarch of a family grieving after a tragic loss.

Things take a turn for the strange when the family begin to experience a series of increasingly disturbing occurrences that build to a memorable denouement.

Boasting a standout turn from Toni Colette and Byrne’s traumatised wife, Hereditary earned writer/director Ari Aster rave reviews, with many proclaiming it one of the scariest films ever made.

Now a new study from GIGACalculator.com has confirmed that Hereditary is, scientifically speaking, the scariest film of all time.

To do that, they asked 150 brave souls to watch a selection of noted horror films for the first time, while wearing a heart rate tracker to monitor their pulse.

All of the films shown were selected via a survey of 2,542 “gorehounds” who were asked to name the top 10 scariest horror films of all time.

GIGACalculator.com found Hereditary was the most heart racing horror film, making pulses rise to an average of 115 BPM - a significant jump compared to the average resting heart (60 – 100 BPM).

The volunteers reported that although there aren’t too many explicitly terrifying moments in the movie, the pervasively sinister and dark atmosphere of the film proved enough to make hairs stand up throughout!

Saw came in second place. Although released 16 years ago, the first film of the iconic horror franchise raised heart rates to an average 113 BPM.

Participants described the torture scenes in the film as "harrowing" and "disturbing", making them scared of the serial killer Jigsaw even after the movie ended.

The acclaimed Australian film  The Babadook, ranks in third place. In fact, those watching the film experienced an average BPM of 110. 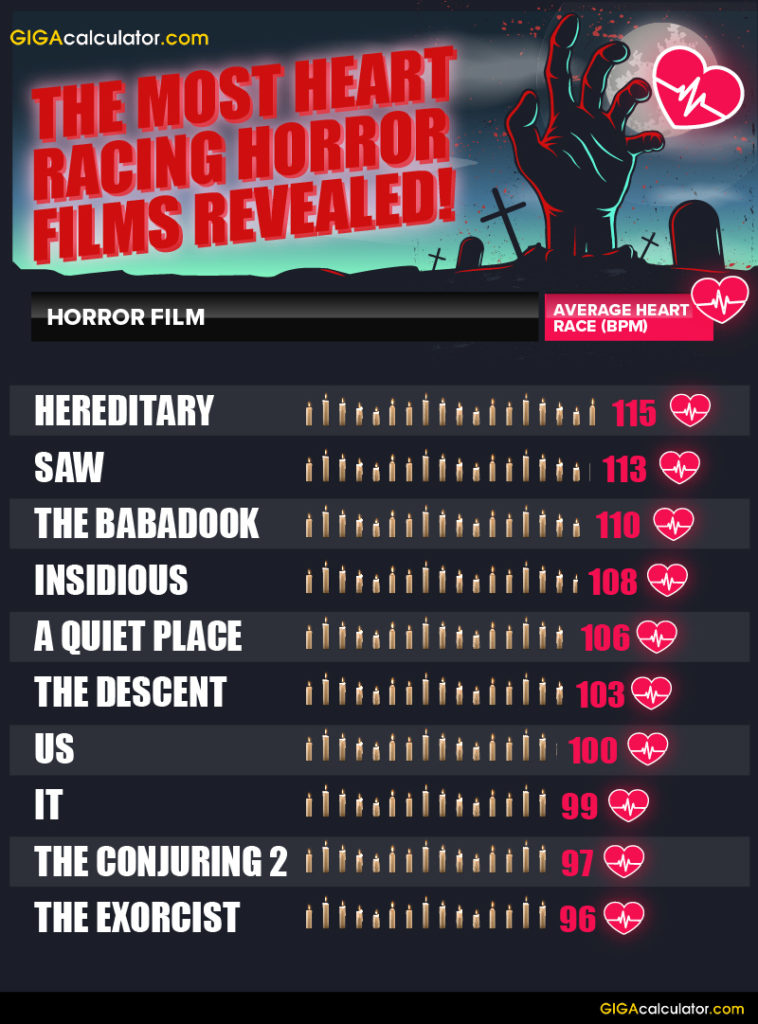 The 1973 horror classic The Exorcist rounds off the top 10. Based on a true story, this film made the heartbeat of brave viewers jump to an average of 96 BPM. Iconic scenes like the possessed 12-year-old girl levitating and spinning her head seem to still shock people to the core.

Inspired by the thrill of terror, GIGACalculator.com asked Lee Chambers, Psychologist and Wellbeing Consultant, to get a better understanding:

"As human beings, there are a wide range of reasons we enjoy watching horror films. First, it's a form of entertainment. Our desire to seek sensations and avoid boredom draw us to a type of movie where something gruesome could happen any minute.

“There is also the understanding of limits of our own emotions, in the comfort of our own homes or cinema. You can be terrified but still be safe, you can even hide behind the sofa if it's too much. This emotional regulation activation is powerful, and it allows us to test our fear and anxiety in a controlled environment.

“Scary movies are also powerful mindfulness devices. You're unlikely to be worrying about anything else while watching one, and they are a distraction from the monotony of everyday life, creating a novel experience.

“They are also a tense experience, and we are able to psychologically distance ourselves as we know it is not reality, which gives us the shock sensation without the disgust."