SINCE BUSTING an illegal street party in Co Limerick, Gardai have arrested five people, issued 50 Covid fines and seized more than €17,000 worth of cocaine from the student area where lockdown-breaking bash occurred.

The street party, which was recorded and posted online, has ignited fury around the country – in response, the University of Limerick have warned they’ll suspend or expel students found to be flouting public health laws at the illegal rave.

Further Education Minister Simon Harris condemned the incident and stressed that it comes as the National Public Health Emergency Team have warned Government about a number of “significant clusters” of the virus detected among college students.

Upon arriving at Carysfort Avenue in the Castletroy area of Limerick at 7.15pm following a call, Gardai found more than 100 students had congregated for a party.

According to locals, partygoers began arriving as early as 2.30pm, many more followed; the swelling number of revellers were clearly shown in footage of the event posted to social media – where hundreds of young people can be seen dancing, drinking, and, unsurprisingly, not socially distancing. 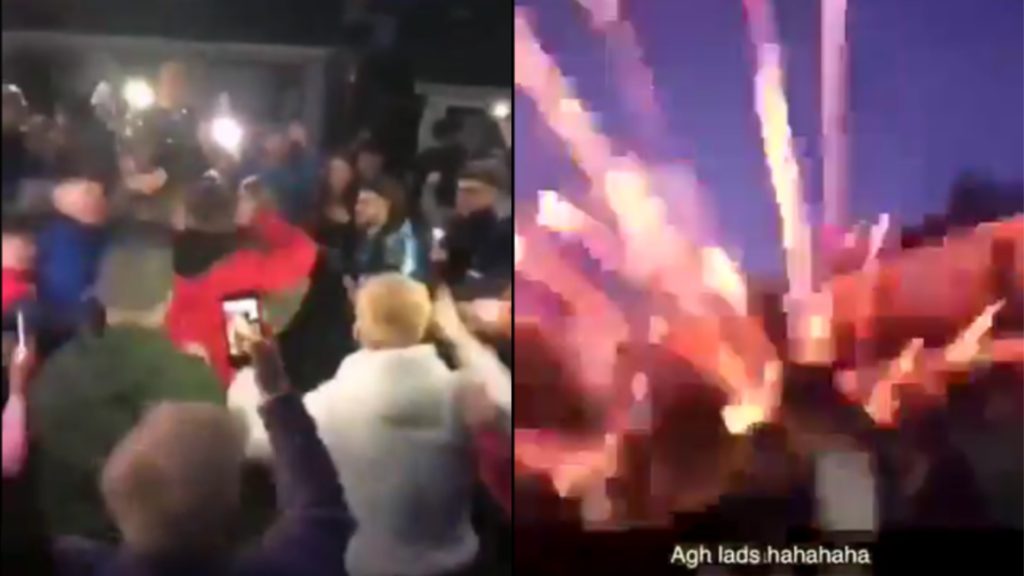 Scenes from the party in Limerick

Gardai in Limerick have come down hard on those in attendance – by dishing out 50 fixed payment notice fines of €150 for breaching the Covid-19 health rules and arresting a total of five people.

Two men in their 20s were arrested under public order legislation — one of whom was charged and appeared before Limerick District Court today while the other was released without charge.

Another man was detained under the misuse of drugs legislation and is still being questioned in relation to the event at Henry Street Garda Station.

After the ravers were disbanded, Gardai followed up with a high visibility policing operation on Tuesday night, during which they arrested two more men and seized €17,500 worth of cocaine.

The pair were found with the cocaine along with €800 cash stashed in the vehicle and were in the same College Court area where the party was held.

The narcotics were sniffed out by Garda search dog Bouncer from the Southern Region Garda Dog Unit. Both men are being detained at Henry St Garda Station for further questioning.

A source told the Irish Sun that the men knew people attending the party and were picked up by gardai several hours after the party had been broken up.

Gardai have committed to looking into how the party was organised and will seek to issue those responsible with heavier fines.